We were without internet access for like twenty-five hours on Wednesday / Thursday and it was exactly like that one episode of Little House on the Prairie where they lose their internet access and Pa Ingalls has to take the horses out into the blizzard to chop it free or whatever, except that the snow is so deep and the internet is so heavy that when he loads it all on the horse to take back to the cabin, the horse can't move, so Pa builds a barn around the horse and the two of them just stay outside like that until the snow all melts in the spring and Laura and all the lesser Ingallses missed everything that happened on Facebook for, like, the whole winter. 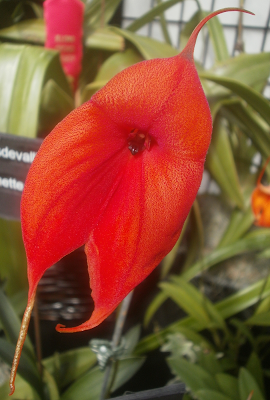 This plant didn't, like, blow me away at the show or anything, but the photo turned out nicely. I'm this close to being more depressed that I can't grow Masdevallias than I am about not being able to grow Paphiopedilums.

This genus is new to PATSP, though there will be a different Lycaste post in January. Not sure how I feel about this exactly. It's not actually peloric, but it looked enough like a peloric flower on first glance that I was confused for a while. I suppose the color is pleasant, and the flower is at least big, so it's got that going for it. 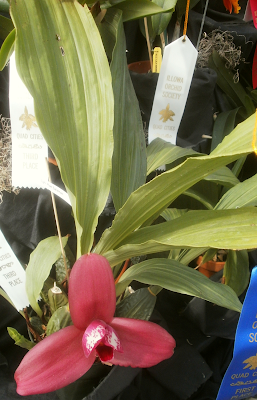 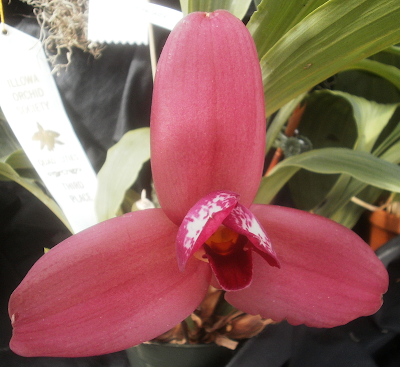 Not a lot going on lately with the Anthuriums; a lot of the previously-pollinated flowers have produced ripe berries now, so I've sown seeds from:

And by the time you read this, I will probably have sown seeds from #002 "Alexis Mateo" as well.

There have been a couple recent seedling deaths, but only among the newer / smaller 3" plants -- nobody you'd know.

No thrips sightings in quite a while, which is good news, though some of the reason for that may be because there aren't many active blooms at the moment. I haven't seen a first-time bloomer since late August (#171 "Genevieve la Difference"), and I think all of the buds that the Anthuriums have tried to produce lately have aborted without developing. The thrips seem to prefer the spathes to the leaves, so with fewer spathes to choose from than usual, and with everything being sticky from the oil / dishwashing liquid mixture I sprayed everywhere, the thrips have been having a tough time.

Also started lots of new seeds from the NOID purple (41 seeds), NOID pink (31), and 'White Gemini' (51) lately, moved a lot of seedlings to 3" pots, and have a first new bud on 'Joli' now (which may still drop, but it's developed further than most, so I may be able to work in some 'Joli' genes after all).

'Midori' has definitely been pollinated, and I count 14 developing berries right now. If 'Midori' is typical, then Anthurium math says I should get about 16 seeds and 10 seedlings from that pollination, of which maybe 1 will live long enough to produce an inflorescence. But I can try again with the next 'Midori' bloom, too.

I'm also trying to decide which of the seedlings to move up into 6" pots; a lot of the 4" plants are floppy and easily tangled in one another. Because they're all flopped together, most of them aren't getting enough light anymore, and they can't really sucker, so some of them are going to need more room, like, yesterday. The trouble is that very time I start trying to make a list of possible candidates for promotion to 6", I wind up with like 15 plants on the list, and there's no way I have room for 15 6-inch Anthuriums anywhere in the house, so I'm going to have to do a lot of rearranging, it looks like. And maybe some throwing-away and selling.

So, overall, things are more boring and less pretty than I expected, but the indications for the future are fairly positive: lots of new plants, it's possible if not likely that the thrips and scale are gone, and I may be able to start thinning the herd by selling some of them on Craigslist once they start blooming again.