This is the orchid picture that would have been posted yesterday, if not for the Blogger Blackout. I don't think I have much to say about it. I like paphs, but so far, all indications are that they don't like me. I don't know why. 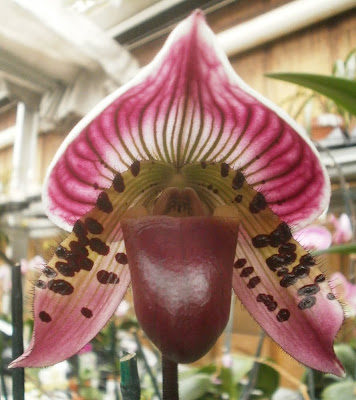 Which is fine. I can learn to admire from afar, if I have to.

Posted by mr_subjunctive at 3:00 PM 1 comments

I'm very interested in Sheba's interior life, what she thinks about during the day, how much she understands about what's going on, that sort of thing. I mean, I don't think she has particularly complex thoughts or much self-awareness, but I think she does have a sense of different things happening at different times, and I think she does some things for "reasons," in the way that a person would talk about reasons.

There's obviously no way to ask her what she's thinking directly, but with some stuff, you don't really have to. When she shows up in the doorway at 10 'til 10 in the morning, and stares pointedly at me, it's not that much of a stretch to think that this is because she wants to go outside (we usually begin the walk between 10 and 10:30 AM). When I make eye contact and start walking toward her, and she starts thumping her tail on the floor/couch, I figure it's probably because she knows the odds are good that I'll pet her, and the possibility pleases her.

Once in a while, she'll bring a toy into the office, look at me pointedly, and bring the toy as close to my hand as she can get it, over and over, until I try to take it away, and the tug-of-war she wanted ensues. And if I let her tug it away from me, she'll bring it back and try to put it in my hand again.

It's not rocket science, okay, but it shows some understanding of the way things work, at least within her fairly predictable world.

Which is why I'm curious about this: 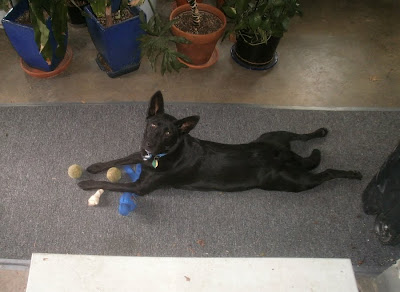 Yesterday afternoon while I was running around watering stuff, Sheba collected four of "her" objects together and was sitting, just sitting, with her paws resting around them. This sort of thing has happened before, though it's not usually that many objects, and she's doesn't usually plonk down directly in my way when she does it. And ordinarily they're kind of strewn throughout the house: it's not like she normally tries to keep them all together. So this is kind of new. What does it mean? She wasn't playing with them, just collecting and then I guess guarding (?) them. Perhaps this is the German shepherd in her making its presence known -- herding, guarding. But that's only sort of an explanation. I want to know what she was thinking.

Just asking questions for which there are no good answers again. It's a thing I do.

If you've wondered why there weren't any posts for two days in a row: Blogger has been inaccessible for about the last day and a half. I could read posts, but not edit them or comment on them. This may be (hopefully is?) resolved now, but that's why there was no post this morning.

The reason for there being no post yesterday morning is that I spent a couple hours frantically trying to get a post written on Wednesday night, and apparently Blogger's outage happened after I began writing, so none of it was saved. This is no big loss (it's not like it was my best work), but still. I did write something, and it's not my fault you didn't see it.

Thursday was kind of like that all day long: we were without electricity for about an hour first thing in the morning too.

Truthfully, I didn't mind having a couple days off. I remain slightly burned out on blogging (the problem is less blogging than it is watering: I'd be happy to keep blogging, but I have too many plants. Something always needs to be watered, and it's always behind schedule, and the consequences for failing to water are worse than the consequences for failing to blog, so the watering always takes priority.), and I got a bunch of new trade plants in this week, so I had a bunch of cuttings to pot up and photos to take anyway.

A few of those are really incredible plants, too (or at least, they will be incredible plants if they root and don't die), which I will blog about just as soon as I can get pictures sorted and uploaded and all that.

Posted by mr_subjunctive at 11:57 AM 7 comments

It turns out that I don't have particularly strong feelings one way or the other about Dahlias. I sort of feel like I ought to -- there are certainly some very vocal Dahlia enthusiasts out there -- but I can't work up much more than a resounding meh. This is perhaps a character defect, though I'm inclined to blame it on the fact that a lot of other kinds of flowers -- daisies, chrysanthemums, Zinnias -- do similar kinds of flowers. Dahlias lack distinctness, for me, I guess is what I'm saying.

Three of these are NOIDs I photographed last week at Lowe's; the two speckled/striped ones are from a mixed group that were identified as D. 'Fireworks.'

The first and last pictures are my favorites. 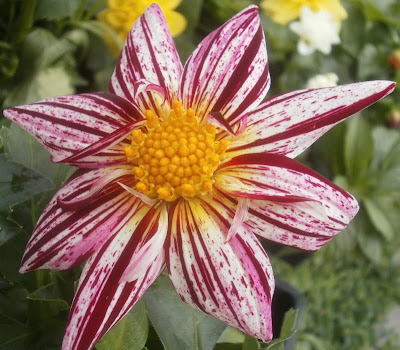 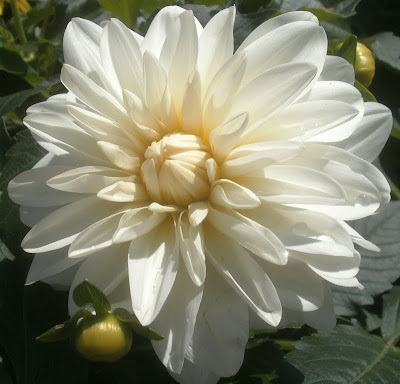 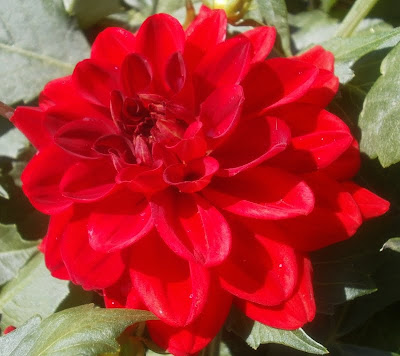 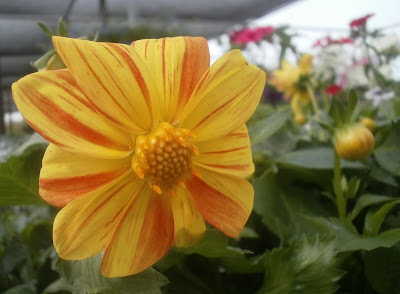 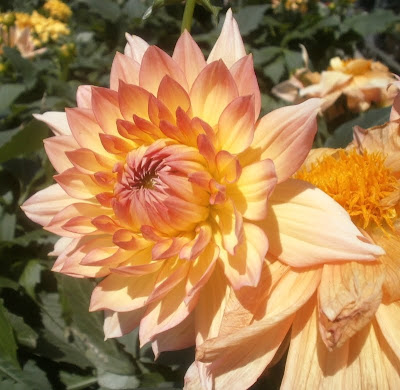 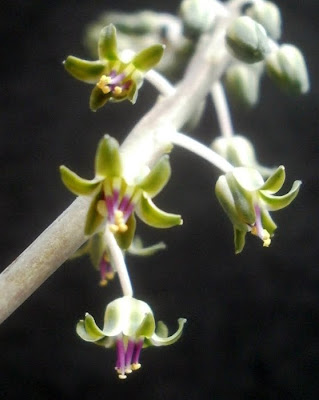 I was selfish (and/or thinking of you, the reader), and didn't mail out the Ledebouria that had flower buds, because I wanted to see if I could take any halfway decent pictures of the flowers (and/or wanted to be able to show you, the reader, some pictures), and this is what I got.

It's at least halfway decent, yes. Maybe even 60% decent.

Side-note: if I'm supposed to be mailing you plants today, I will be e-mailing you at some point before noon CDT (I hope) to tell you they've gone out. I still have plenty of most of them; if you're interested in trading or buying, send an e-mail. 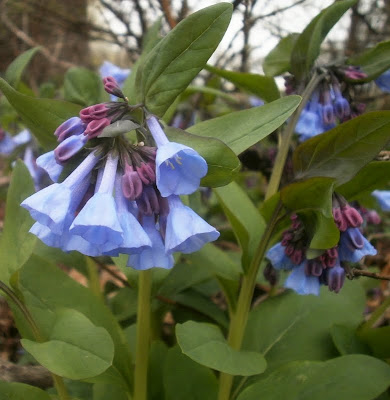 Is it really possible that I've never blogged about Mertensia virginica (Virginia bluebells) before? I just did a search of the blog for "mertensia" and only found one post where I'd mentioned them -- and I didn't even have a picture in that post because it was about tulips.

Which, okay, I realize that I'm only one person, and I can't actually blog about every species of plant I ever run into, but if I really didn't blog about M. virginica until today, I should be punished for it.

Maybe just spoken to very harshly. But there should be consequences. No plant this cool should have to wait three and a half years to be featured on a blog. The puzzling part is, I know I saw them last year: I have pictures of last year's saved on my computer. So what happened to those pictures? Why didn't I write up the posts?

Whatever. So here are some more pictures from this year: 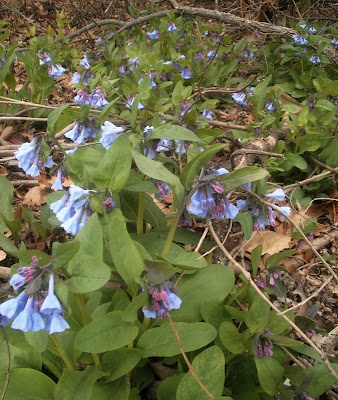 All photos in this post are from the yard of our across-the-street neighbor, which is the largest grouping of Mertensia I've seen anywhere in town. I don't remember when the above photo was taken, but below is the same approximate area, yesterday morning: 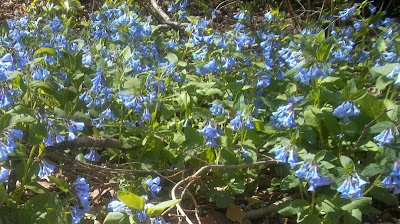 Mertensia is also prone to produce the occasional off-color sport. I did a little googling about the plant, which gave me the impression that white is the most common color other than blue. The neighbor's yard does have a few white-blooming plants, but unfortunately they're all deep enough into the yard to make it difficult to get a picture from the alley, so I don't have photos of them. There are also a handful of pink flowers, which are easier to get to, and they're pretty cool also: I really want some of these for our yard, but the husband and I have not yet been able to get a clear plan yet (among other things, there's an extremely heavy shed that needs to, somehow, move from one side of the yard to the other, which pretty much means nothing can be planted near the origin or destination), and I'm not sure but what the yard wouldn't be too sunny for Mertensia anyway. Still, though, I'm going to be watching to see if I can find seeds on the neighbors' plants anyway. The Wikipedia page for M. virginica has a photo of seeds, so I should be able to identify them, and maybe I'll get lucky.