272 is, as I said in the last post, also from Schlumbergera x buckleyi (pollen parent unknown). Like 256A Yes And No, it's not great, but it does have at least one notable quality, which you wouldn't be able to tell from the photos alone: the blooms were unusually tiny.

Which led me to realize that the flowers I've seen on Schlumbergeras, whether in stores on named varieties or from my own seedlings, are surprisingly consistent in size. This sort of makes sense with the named varieties, because whatever the most lucrative size of Schlumbergera flower might be, you'd assume that breeders would eventually zero in on it and produce only that size, but I'm surprised that there's not more variation in the seedlings.

Even with 272, I'm not positive that the small blooms are going to be a permanent feature: it may be that the flowers were stunted by one environmental condition or another, and next year they'll be normal-sized. We'll find out when we find out, I guess. 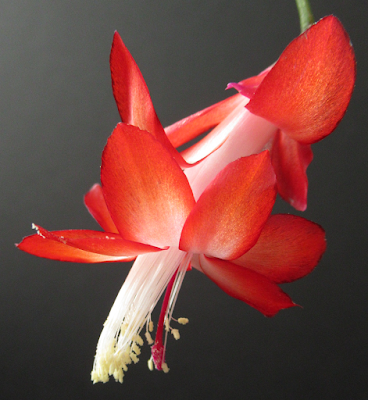 Our name finalists are: Canch, Deimos, Hootsle, and Mercury In Retrograde.

Canch is another name from the dialect dictionary; its definition there is "A small portion of anything;" and readers are advised to check the entry for "smidge." (Though I'm not sure why, because the smidge entry doesn't contain any additional information about canch.) It was apparently heard in eastern Tennessee and western North Carolina in the late 1920s and early 1930s, though Merriam-Webster knows it from England, as a small stack, pile, or quantity. Wordnik is aware of canch too, but defines it to mean a small quantity of a very specific thing, or a small duration of time. So the meaning seems to be kind of all over the place, but with the central concept of smallness.

The original meaning is mining-related, and refers to the situation of having sections of a mine that are at different heights, like when a single layer of something you want to mine has been pushed up or down, so that one section of the material is higher than the other. The canch is the wedge-shaped section of material you have to remove in order to create a walkable surface between the parts you're mining. (Therefore: a small amount of something.) I'm guessing that English (Scottish? Welsh? Irish?) miners who settled in Tennessee / North Carolina brought the word with them, and it became generalized to other materials, though I don't have any proof of that and maybe it's wrong.

Deimos is the Greek god of terror and/or dread, specifically the personification of the terror and dread caused by war.1 He doesn't really appear as a proper character in Greek mythology, according to Wikipedia, but is more of a metaphor. One of the moons of Mars is named Deimos, also.2 I've thought about naming a seedling Deimos last year, with seedling 211A, but went with 211A Bruce Lee instead.

The thinking about why Deimos works for a smaller-than-normal seedling owes a lot to the Buffy The Vampire Slayer episode "Fear Itself" (episode 4 of season 4); readers who are unfamiliar can get what they need from Wikipedia. Possibly Gachnar (the episode's villain) would make even more sense, under the circumstances, but I think the Buffy writers made up the name for the episode, so it doesn't quite have the same historical gravitas. I don't know. 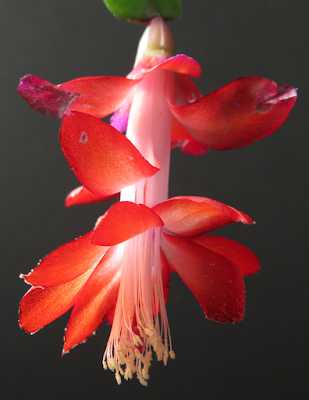 Hootsle (The "oo" looks like it should be the same vowel as in "cute," but was reported at the time to be the same vowel as in "butt." So more "hutsle" than "hootsle.") is another one from the dialect dictionary: it's an adjective meaning small or contracted,3 or a noun meaning a small person or thing, and was observed in southeast Pennsylvania in 1903. I figure its relationship to this seedling is pretty self-explanatory.

And, finally, Mercury In Retrograde. I assume this is on the list for a reason, but I no longer remember the reason. It has sometimes been a joke around the house, when several things go wrong at once,4 but I should stop saying that because it's not true or funny. 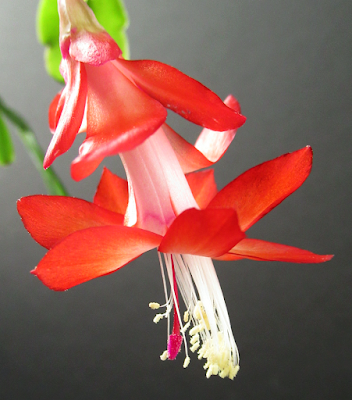 So, yeah. As you can tell from my grumpy footnote, Mercury In Retrograde is out. And I'll drop Hootsle too, because nobody would ever pronounce it "correctly," and I already have a dialect word for small.

Which leaves us with Canch or Deimos, and although I'm not thrilled about Deimos, I'm kind of bothered by Canch, which . . . doesn't sound like it should mean "small amount." To me. (I have the same problem with "skosh."5) So I guess this is 272A Deimos.


1 As compared to Phobos, who personifies fear and panic. They were, of course, twin brothers, and the sons of Ares (the god of war).
2 The other is Phobos.
Point of interest which is not related to plants at all: an observer on Mars would see the two moons orbit in opposite directions, with Deimos rising in the east and setting in the west, and Phobos doing the reverse. Both moons orbit in the same direction as the rotation of Mars, but Phobos moves around the planet so much faster than Mars rotates that from the surface, it appears to go "backwards."
(Phobos is in fact so fast that it rises and sets multiple times during a Martian day. Which pleases me for some weird reason.)
3 The specific usage example given is "They lived in a miserable, hootsle way."
4 It comes from astrology. Both the planet Mercury and the planet Earth go around the Sun in the same direction all the time, never stopping or backing up, but their speeds, and geometry, are such that Mercury appears, from the perspective of Earth, to move backward in the sky. (Wikipedia will try to explain it to you, though the explanation could be clearer.) This happens a few times a year. Astrology believes that Mercury is the planet that affects communication and technology, and that when it appears to go backward in the sky (even though it is still going forward and has not reversed its direction or speed in any way), this means an unusual number of communication and technological glitches occur on Earth. And confirmation bias does the rest.
I hadn't intended this post to involve two examples of astronomical bodies appearing to move in ways they do not actually move, but there you go anyway. Call it a theme.
5 Incidentally: skosh is a corruption of the Japanese sukoshi (pronounced "skoh shee," according to Merriam-Webster). For some reason I had always assumed it was originally Yiddish. But no. It came back to the U.S. with the servicemen who had been in Japan following World War II.
Posted by mr_subjunctive at 3:00 AM 1 comments