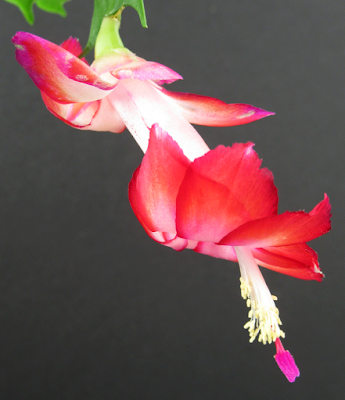 Explanation: There's a lot in Proverbs that I'm not all that crazy about, like for example the verse just before this one,1 but 22:16 ("One who oppresses the poor to increase his wealth and one who gives gifts to the rich — both come to poverty."2) seems pretty darn timely, and has I think been historically demonstrated as well. This name was previously considered for seedling 392A Subjunctive.

I only got one flower out of this seedling, so it's not entirely clear what color it "really" is: best guess is that it's going to be another red / orange / white like 079A Yayoi Kusama, even though it resembles the red / pinks like 078A Art Party more in the photo. I suppose we'll find out eventually. Or not.

Also considered: Get Drunk Make Art, What About The Love 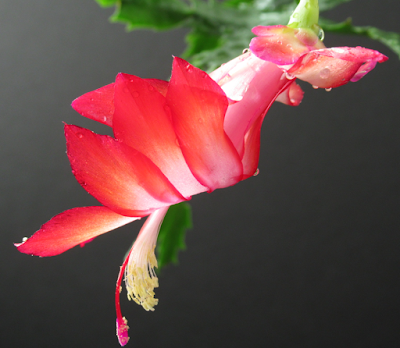 Explanation: This was a weird one. Again, I only got one bloom in the 2017-18 season proper, in February 2018, which is the one in the photo above. But then in November 2018, it bloomed again, significantly lighter and pinker: 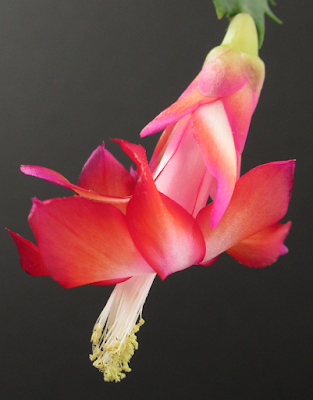 (The photo doesn't do a great job of showing the color difference; you may just have to trust me that there was one.) It may just be that I caught the new bloom earlier in its development, when it still had the magenta along the petal margins, but the seedlings with magenta / red / orange / white petals are often very inconsistent about when and whether they do the magenta part.

The name is therefore sort of suitable (some aspects of the flower are not yet quite known) and sort of not (it's not the shape of the flower that's in question); it also honors someone from my life. (It's originally a math term.) In exchange for not having to wait any longer for a name, I'm willing to live with some inaccuracy. 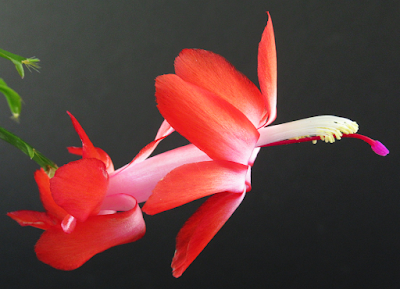 Explanation: I only have one flower from 470A to go on as well, so I'm not sure what it's going to do in the future. I figure a certain amount of redness, or maybe red-orangeness, is likely, and beyond that who knows, so I didn't want to reference the color in the name too directly. I like the song3 (video), and am apparently willing to risk having it stuck in my head periodically. This one attracted angry / violent name candidates for some reason.4 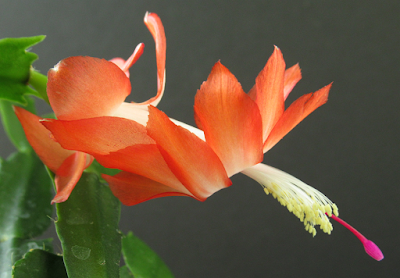 Explanation: Though the photo above is decent, some of the other pictures I took of this one were pretty frazzled-looking. And goodness knows I have enough orange seedlings already. So I'm inclined to discard or sell this one and use the space to grow out a more promising seedling, as if I were playing some kind of card came with Schlumbergera seedlings instead of cards.

Though I haven't gotten rid of it yet, and maybe won't. I do have a hard time getting rid of plants sometimes, even when I know I ought to.

Probably going to divide the Schlummies into multiple posts this year, so they'll be less daunting to compose and read. Then maybe some Anthurium posts, while I try to figure out how to deal with the 2018-19 Schlumbergeras.


1 ("Folly is bound up in the heart of a child, but the rod of discipline will drive it far away.")
I don't believe, as many people seem to, that spanking is always harmful for kids -- I and my siblings were spanked, and I don't think any of us were damaged by it -- but I'm glad to see people in the U.S. slowly drifting away from spanking to other punishments. If nothing else, if hitting a child with anything under any circumstances is Just Not Done, then that gives that much less cover to parents who would use spanking as an excuse to be physically abusive.
But then, I don't have kids and am never going to, so you shouldn't even care how I think kids should be disciplined. I'm not sure I even care how I think kids should be disciplined.
2 (New International Version)
3 Which I was surprised to learn was not only not written by the Dixie Chicks, but was written by a man, Dennis Lynde.
4 Sometimes that happens, not just with angry and violent names but with other kinds of names too. It's probably just that one name sets an emotional tone and then names with similar associations wind up gravitating toward it, but I don't know how I'd go about proving that.
5 "An uncouth countryman," says the dialect dictionary. Apparently heard in the Ozarks (Missouri and Arkansas), east to Tennessee, in the 1930s.
Which, if you're getting called a hick in the Ozarks, in the 1930s, you're really fucking unsophisticated.
Posted by mr_subjunctive at 6:17 AM 0 comments