There are still some bright spots to be found in the Anthurium-breeding project, despite the recent rash of dropped buds and minimal first-time budding. To wit:


1) I haven't seen any thrips in about a week. I gave the basement plants the week off from oiling last week because 1) I was tired, and 2) the smell wasn't getting any better. If things went according to plan, I resumed oiling this Monday, but I figured a week off might do all of us some good.

I also haven't seen any scale since I began oiling the plants in the basement. This is also good news, but less so, because it's always been tough to see scale. I'm pleased that I'm not finding it, but it hasn't necessarily gone anywhere.


2) The grandseedlings are coming along adequately. I potted up more seedlings from #276 "Zach Religious" on 24 August, making 22 second-generation plants now, all of them Zach's. I probably won't get 100% long-term survival, but that's fine. Zach has thanked me by producing a new bloom that photographed nicely and is a good bit larger than the previous one: 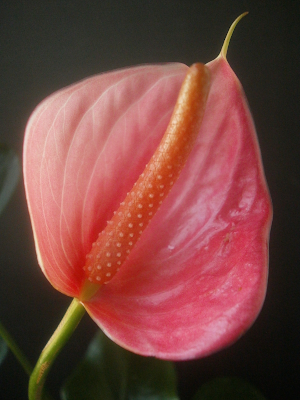 Seeds have now been started from #271 "Wanda Reulthemal," #273 "Wes Coast," #239 "Russ Teanale," #005 "Chad Michaels," and #059 "Bijoux Tuit." The only interesting things about this so far are that a couple of Wanda's have germinated and should be ready to stick in soil soon, and Chad is spectacularly fertile (more than 70 seeds from one inflorescence, though that doesn't mean that that many will germinate). 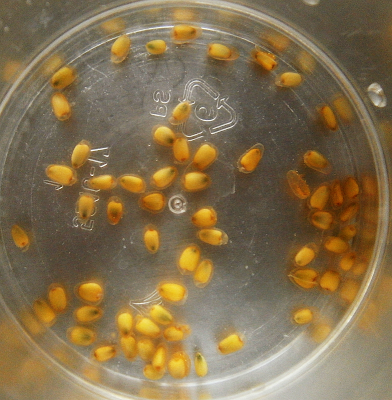 Photo actually only shows 60 seeds; another 10 were ready to sow a few days after this, and the spadix still had a few unripe berries.
Many, many more seedlings are developing berries,1 though some of them are unbelievably slow about it.


3) I'm pretty sure I managed to pollinate 'Midori.' I don't yet know how many of the individual tiny flowers got pollinated, but I can see about eight bumps in the middle of the spadix that are bigger than the others and seem to be growing. Even if it worked, I won't have any ripe berries for quite a while, but I had been worried that it was going to be exceptionally difficult to pollinate, like 'Florida' (still no luck with 'Florida,' by the way) and maybe it's not. 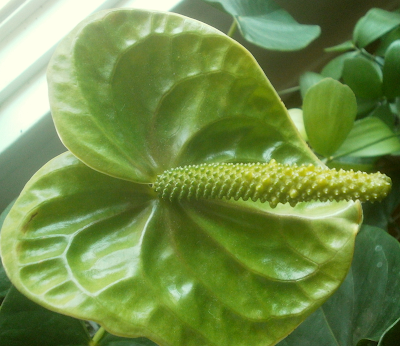 'Midori' was happy enough here that it tried to produce a second bloom a few weeks ago, but the developing bloom got stuck in the cataphylls and snapped its own stalk off. Which is a thing that happens occasionally. I'm hoping 'Midori' will try again before the winter.

I also have at least two blooms on the NOID purple pollinated (picture of one below), one from the NOID pink, and six blooms on 'Pandola.' In all cases, the most likely pollen parent is the NOID red, which is super-reliable about producing pollen and not much else. Though the NOID red has also been pollinated, probably by 'Pandola' or itself. 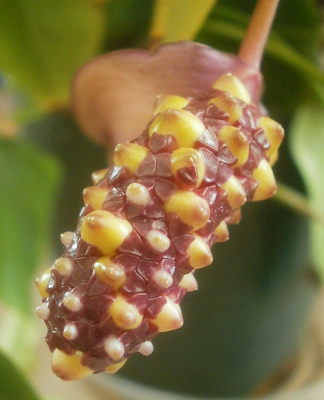 And yes, I know, pollinated Anthurium spadices are not the prettiest things to look at. Scroll back up to Zach's picture if you feel the need.

4) Does it count as good news if it hasn't happened yet? Because I have a theory which, if true, is encouraging.

I've been sort of mildly bummed out all summer, that there weren't more first-time buds showing up. I guess I got kind of spoiled during the winter and spring -- from late December 2013 to late May 2014, I was seeing, on average, a first-time bloomer every three and a half days. From June to August, that's dropped to one every three weeks.

My theory on this is as follows:

1) the Anthurium seedlings just won't bloom unless they're in 4" pots. I don't know why it matters or how they know, but no seedling has ever attempted to bloom in a 3" pot. On average, once transplanted, it takes them ten months to produce their first bud.2
2) I tend to up-pot in large batches, whenever enough room becomes available. There were 90 plants moved up in January, February, and May 2013, who I think of as the "Class of 2013."
3) It's maybe the case now that all the seedlings from the Class of '13 which are inclined to bloom easily in basement conditions have done so already, and the reason first-time blooms slowed down this summer was because the class of '13 was too old to do first blooms, and the class of '14 (i.e., the 126 plants I repotted in October 2013, January 2014, and April-July 2014) was too young to start blooming yet.

The theory winds up making two predictions. The first prediction is that I should be seeing a couple first-time buds from the Class of '14 more or less now, which has happened with #279 "Tristan Shout."3 The second prediction is that I'll start seeing more and more of those happening as we get into the winter, and by February 2015, first-time buds will be appearing once or twice a week again, as the seedlings from the Class of '14 reach blooming size. That obviously can't be confirmed yet, but it's a prediction. And it's making me feel slightly better for the moment.

It's also possible that the air conditioning is suppressing blooming in the basement, though it doesn't seem to be bothering the Anthuriums upstairs. If that's the explanation, though, the result is the same -- when the heater switches on in the winter, suddenly there are lots of new blooms again.


1 As of Friday 29 August, there were berries developing on: #002 "Alexis Mateo" • #005 "Chad Michaels" • #031 "Sylvester" • #059 "Bijoux Tuit" • #063 "Audrey Quest" • #066 "Barbara Seville" • #076 "Bob Humbug" • #083 "Carmen Adairya" • #097 "Colin Ambulance" • #108 "Deena Sequins" • #110 "Delta Badhand" • #125 "Anya Wei" • #126 "Erin Dirtylondry" • #200 "Mario Speedwagon" • #223 "Patty Cake" • #231 "Rhea Listick" • #232 "Rhoda Badcek" • #234 "Ross Koz" • #239 "Russ Teanale" • #244 "Sarah Problem" • #245 "Sawyer Ad" • #271 "Wanda Reulthemal" • #273 "Wes Coast" • #280 "Jujubee"
Not all of those will necessarily reach maturity and be sown, and not all the seeds that are sown will necessarily germinate and grow, but that's a pretty big group, especially considering that I've only been doing this for three years.
Also: holy shit, I've been doing this for three years already.
2 Though that's with a range from 1 to 17 months; it's not like you can make them bloom when you want by repotting them at the right moment. Time since repotting is a better predictor of when they'll bloom than the time since germination is, but only barely.
3 Wait, what about #171 "Genevieve la Difference, who also just started forming a bud for the first time according to your previous post?" I hear no one at all asking. Well.
Genevieve is a really late bloomer from the Class of '13; she should have started her first bud five months ago. I think that means she had to repeat a grade. Or maybe she missed so much school after that skiing accident during Spring Break that she had to take an incomplete, so then she made up the work during the summer and graduated late. I dunno. The graduating-classes metaphor is perhaps getting a little overextended.
In any case, Tristan is the only one from the class of '14 to do a first-time bloom when my theory predicts first-time blooms from that group should begin.
Five other members of the class of '14 have tried, precociously, to bloom by now:
• #218 "Noah Fence" (repotted October, bloomed May, completed July)
• #231 "Rhea Listick" (repotted October, bloomed February, aborted April, retried May, completed June)
• #265 "Madame LaQueer" (repotted October, bloomed June, aborted July)
• #280 "Jujubee" (repotted October, bloomed March, completed April)
• #281 "Laganja Estranja" (repotted October, bloomed April, aborted June)
Posted by mr_subjunctive at 3:00 AM 3 comments

This was one of the four "wow" orchids from the 2014 show (along with Laeliocattleya Natrisiri and two plants yet to be blogged), not so much for the shape of it (though that's nice, I guess) as for the color, which is really, really unusual as far as I've seen. (I thought I'd encountered it at an orchid show before, as, like, an accent color in some flower or another, but when I went back into the blog archives to find an example, I couldn't locate any. And part of what's cool about this particular one is that the odd color is the entire flower, not just a petal or margin or something.) 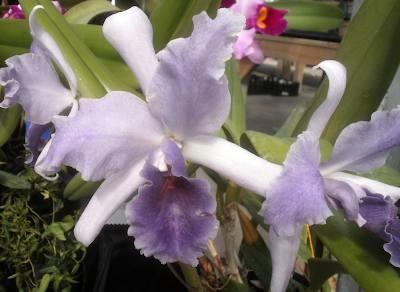 It's also possibly more impressive in person, given the tendency of digital cameras to get weird when it comes to the extreme red and violet ends of the color spectrum. 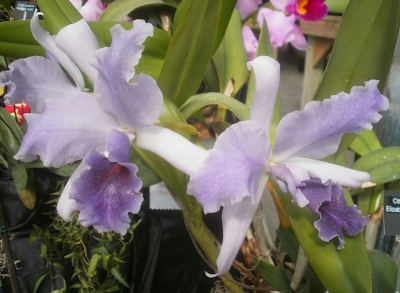