Usually, when an orchid at the show has a scent, I can't confirm it, either because there are so many competing fragrances that I can't tell which one belongs to the plant in question, or because the plant is inaccessible. In this particular case, I was able to confirm that there's a scent. 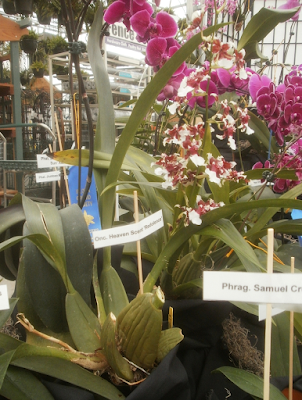 Which it really ought to be fragrant, considering that the name for both the grex and clone makes reference to an odor.

The flowers resemble Onc. Sharry Baby so much that I was expecting the smell to be similar too. Sharry Baby smells a lot like sweet, vanilla-heavy chocolate, and is really pleasant, so that's what I was expecting, but that's not what I got. Instead, it was "more floral," according to my notes from March, and I didn't actually like it. It may be that being primed to expect vanilla/chocolate made the floral smell less pleasant than it would have been otherwise; it's also possible that it's just a disagreeable fragrance, though the name suggests that the breeders didn't think so. 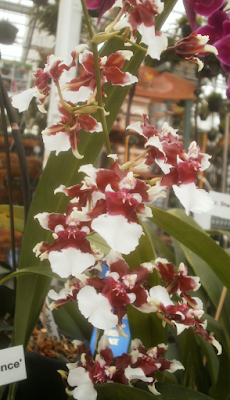 It also turns out that Onc. Heaven Scent is half descended from Onc. Sharry Baby. I mean, you can totally see it in the appearance, but I wouldn't have guessed from the fragrance. So that's also interesting or disappointing or something.

In other news, as I write this (Tuesday morning), I have completed the first part of the Anthurium purge, getting rid of 32 seedlings, 3 parents ('Joli,' NOID green/pink, and salvaged cuttings of the NOID purple), and one miscellaneous other plant (Aglaonema 'Sapphire Suzanne,' which was overdue for discarding: it hasn't been happy since it arrived here.). I was also probably more lenient with certain highly beloved plants than I should have been, which will no doubt make the whole process completely futile, but even so: only a 39% pass rate on the first round.

The 3-inch and 4-inch plants will be both harder and easier to deal with. They're harder because there are a lot more of them, and because in most (3-inch) or about half (4-inch) of the cases, there's no bloom to evaluate yet, and I'll have to gamble, in part, on what I think the bloom might look like. Easier because in the cases where there are blooms to evaluate, the blooms are disproportionately garbage (if they were good blooms, the plant would have been promoted to a 6-inch pot and then purged on Monday), and many of the 4-inch plants have been around a very long time without ever even trying to bloom, so it's probably safe to conclude that they don't intend to and I don't need to keep taking care of them. So my expectation is that the pass rate for the 3-inch plants will be higher than 39%, and the rate for the 4-inch plants will be lower.

Some non-Anthuriums will be dumped here and there too, eventually. I'll be focusing particularly on the Dracaenas (bacterial or fungal leaf spot) and Aglaonemas (ghost mite reservoir).