And now there are Coffea arabica seedlings. 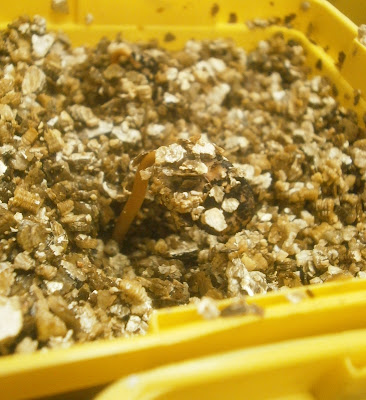 Those of you who were following along were probably expecting to see this post sooner or later, and may not find it that interesting, but it's a big deal to me, 'cause I've been nervous about it for the last few weeks.

I'd let the first batch of seeds dry for eight weeks, because I had read that that was the way to get the best germination. Then when it came time to sow the seeds, I looked online for information about the best planting depth, and all the sites I found were warning me that internal moisture was critical for germination, and if I let the seeds dry out for more than like 12 hours then I may as well just throw them away, because they'd never sprout.

I'm pleased to report that those websites are full of crap. Not only is it possible to sprout a Coffea arabica seed after drying it for eight weeks, but the seeds I treated that way are the only ones that sprouted at all. So far, at least.

As of last Wednesday night (27 March), I had six sprouts, which I have helpfully circled in the photo because you probably wouldn't be able to see them otherwise: 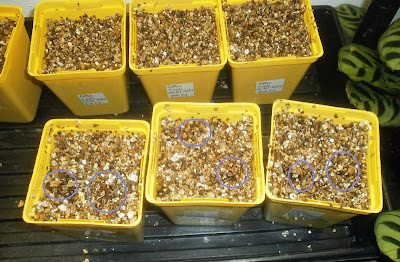 They were started on 18 February, so that means 37 days from sowing to seeing something happen, which is within the usually quoted germination time of 1-3 months. So everything seems to be happening as expected so far. The non-sprouters have another six or seven weeks to go before I start thinking about giving up on them, and probably another three or four weeks after that before I actually give up on them.

Not that all would be lost if these six are all I get; the parent plant is forming a new crop of berries already, so I will have another set of seeds to plant around December, no matter what happens with this first batch.

EDIT: As of Saturday morning, there are eight seedlings up, in total. The two newest ones are also from the dried-for-eight-weeks group.

EDIT: As of Sunday evening, there are fourteen seedlings emerging. They're all from the dried-for-eight-weeks group. Drying them for eight weeks before planting may or may not be how one is supposed to do it, but it seems to work.

Another case where backlighting wasn't helpful. 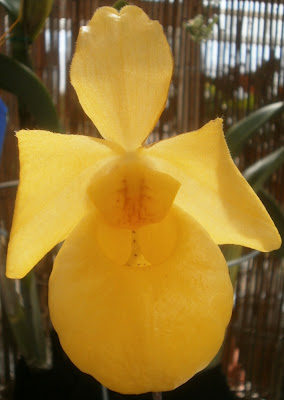 I'm also confused a bit by this one, because this is the second P. armeniacum photo I have from this show. (The first.) Ordinarily, if I had multiple pictures of the same species, I would put them into a single post. The pictures are obviously not of the same individual flower, and the lighting suggests that maybe it was from a different plant entirely, but it's weird to think that I could have taken photos of two different Paphiopedilum armeniacums at the same show, brought the photos home, sorted through them, edited them, and scheduled them without ever noticing that they were of the same species.

They were even both tagged correctly, so I can't use that as an excuse. What was I thinking?

Not that it matters a lot either way. I just think it's weird.

This is also the last of the pictures from the 2012 orchid show, if anybody but me is keeping track of that.

What should you expect from the 2013 batch? Well, I didn't get as many, so they'll be further apart (every six or seven days, instead of four or five), and they're a little less unusual: mostly Cattleya-type stuff and slippers. This is not my fault. The show in general was pretty light on oddball orchids, compared to previous years. (I only saw one Masdevallia, and it was in a spot I couldn't photograph easily. There was only one Miltoniopsis, and it was a repeat.)

Some of them were nevertheless very pretty, and there's a weird Dendrobium coming up on April 10 that I expect everybody will like, but I was hoping for a weirder show than I got. On the other hand, their spelling and ID-ing has improved. So there's that.

They Grow Up So Fast, Part 5

Another one of these, motivated mostly by the fact that I just took a round of new pictures a week and a half ago and clearly had to do something with them.

Unidentified fern
This was a "bonus plant." It came along with the Rhipsalis NOID, way back in March 2011. I didn't expect it to survive, but I was curious about what it was, and I figured it was worth a shot, so I removed it as carefully as I could from the pot and put it in its own 4-inch (10 cm) pot, with a clear plastic drinking glass over it to keep the humidity high while it recovered. For a while at the beginning, I thought it might be a Microsorum diversifolium, but I'm thinking now it's probably a Phlebodium aureum, or something very similar. Which is kind of nice for me, since the big huge Phlebodium aureum 'Mandianum' got thrown out in the scalepocalypse and I didn't have a back-up. 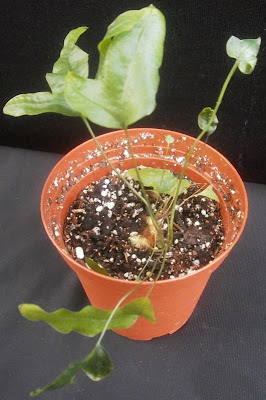 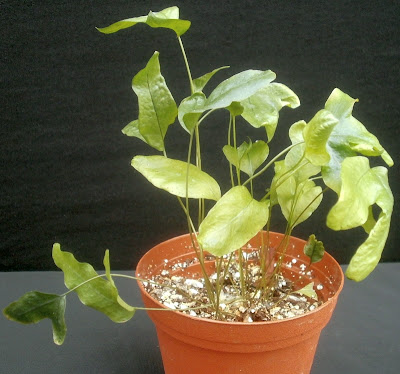 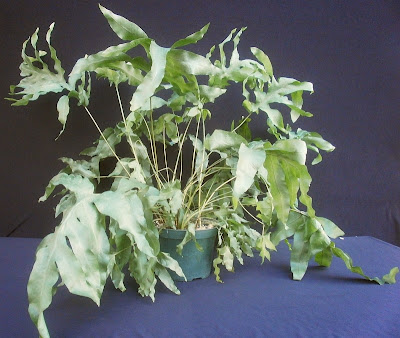 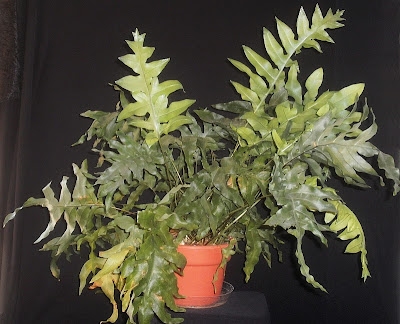 Agave desmettiana?
Another one that's changed size pretty dramatically, though in this case it took quite a bit longer. It would probably have gone a lot faster if I'd been letting it spend every summer outside, instead of just 2012.

I can't say enough nice things about Agave as a genus. They're among the least fussy plants I've grown, they get gratifyingly big, they're easy to propagate (once they decide to start offsetting), and they're neat-looking. I mean, sure, you do have to be willing to get stabbed in the face from time to time. But everything else about them is awesome. 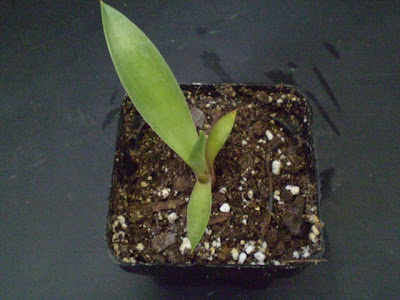 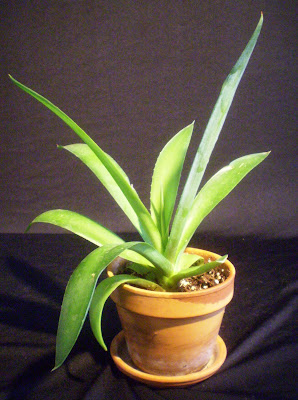 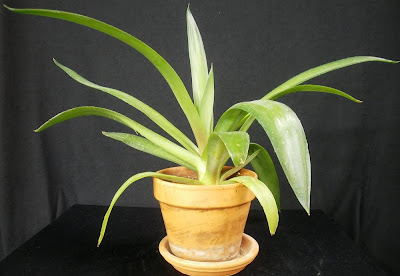 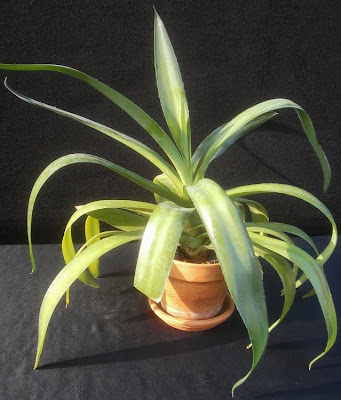 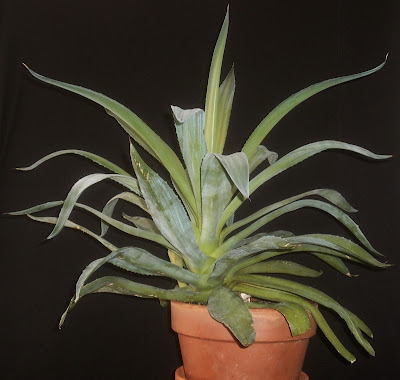 Epipremnum aureum 'Neon'
I'd had bad experiences with 'Neon' in the past; one 4-inch (10 cm) plant did okay for me until I tried to move it up to a 6-inch (15 cm) pot, and then it suddenly rotted and died. I couldn't even salvage any cuttings: they were somehow already rotten by the time I took them, even though they looked perfectly healthy.

However, I couldn't resist trying again last summer. It turns out that it's a much more forgiving plant if you give it things like light and fertilizer;1 there's only nine months' difference between the two pictures below. 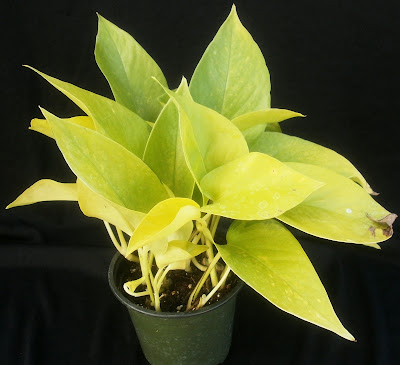 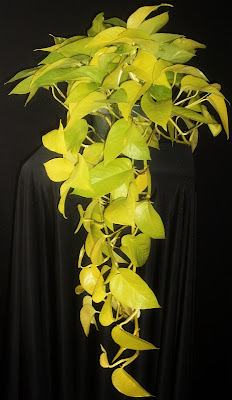 I'd been worried that this was going to be another situation like Anthurium "hookeri,"2 where I wouldn't be able to provide it with enough light, so it'd get huge, weird leaves and never look quite right. But so far, it's been pretty happy with artificial light and regular room conditions. The husband's office tends to run colder than the rest of the house,3 even, but that hasn't seemed to be a problem. It's getting close to outgrowing its spot, and I'm not sure I have anywhere to move it when it does, but it surely has to count as a success to have gone from seedlings to monster in just under three years. 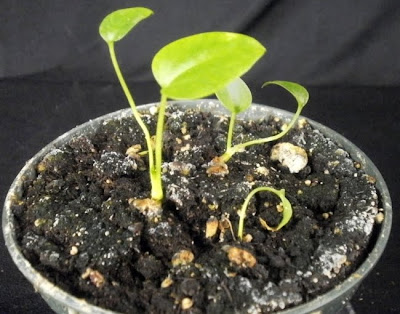 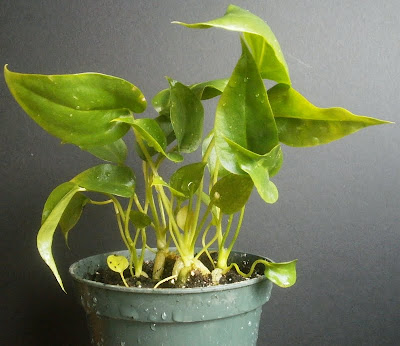 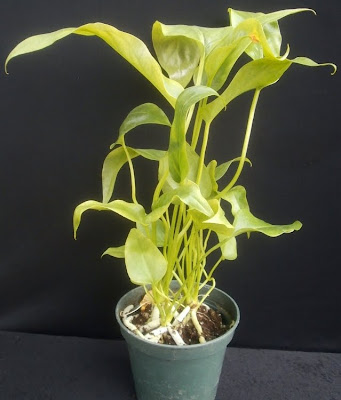 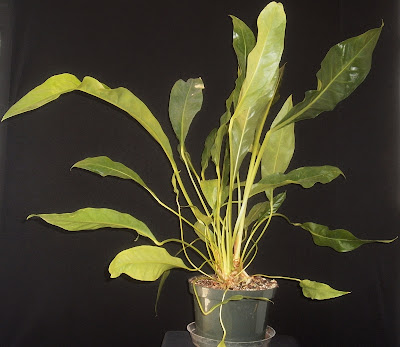 Unidentified Ficus benjamina cv.
This one started out as perlite-rooted cuttings from the ex-job, and I didn't give it decent light until very recently, because there's only so much light to go around and it didn't seem to urgently need a lot. But once I gave it one of the highly-coveted south window spots, it's filled out like crazy, much better than some of the other Ficuses I've started from cuttings. (How many times do I need to learn that even plants which tolerate lower levels of light might still prefer more light? I don't know. At least twice, apparently.)

Ficus benjamina is another one that I'm appreciating a lot more in the last year or so than I did before that. Sometimes the boring plants you see everywhere are everywhere for good reasons. 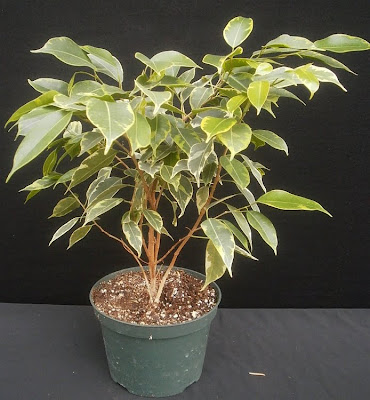 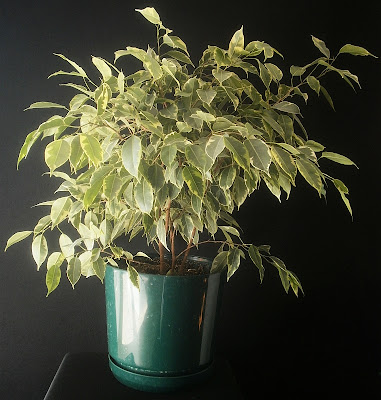 
1 (who knew?)
2 (Sold to me as A. hookeri, but I understand it's pretty unlikely to be A. hookeri, hence the quote marks.)
3 We chose wrong when we were picking out rooms for ourselves. I'm always too hot, but I picked the hottest room; he's always too cold, and picked the coldest. In our defense, we didn't know any of this at the time we were doing the picking. We've both made enough changes to the rooms that it would be difficult to switch back.
Posted by mr_subjunctive at 3:00 AM 5 comments

Best Bulbophyllum so far. Not that there's a lot of competition. (There's competition insofar as some really pretty Bulbophyllums exist in the world; there's not much competition in that this is only the second one I've posted to PATSP. You're going to have to wait until August to see a third. And spoiler alert: it's not as pretty as this.)