I realized very late last night that I hadn't written a Sheba/Nina post for today yet. (I'd lost track of what day it was.) So here's a picture of Sheba from November 2010: 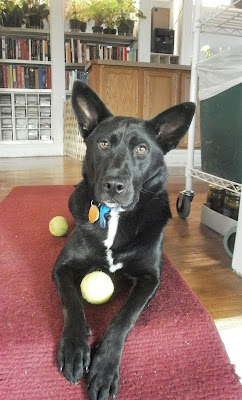 And yes, I am extremely fond of dill pickles (right center, under the wastebasket).

The mystery of Sheba's sudden bald spots remains a mystery, because we didn't make it to the vet this week. At least some of this was miscommunication between the husband and me: I thought he was going to make the appointment, and he thought we hadn't decided for sure that we were going to make an appointment, so it didn't happen. The bald spots are mostly filled back in again anyway -- I can still see where they are/were, but mostly that's because I know to look for them. I'm not sure anybody who didn't know there was something to see would see anything. And it's not like Sheba seems particularly bothered by them anyway.

Nevertheless, we've re-discussed the situation, and I think are in agreement now, so perhaps next week she'll see the vet. Her nails need trimmed, if nothing else, and there are other things we're wondering about with her besides. 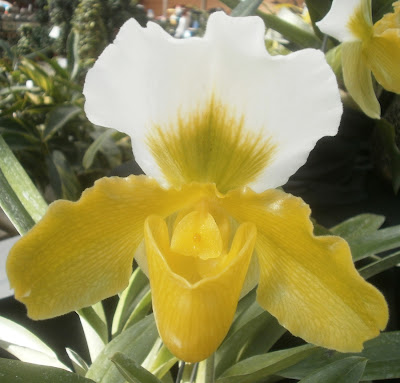 More orchid genealogy today, since I can't think of anything much to say about this flower except that it seemed less green at the show.

The end result, when you substitute the species crossed for the names of the crosses until you're down to nothing but species names:

Which if my math is right works out to:

I looked up Paph. insigne on Google just to see if Betty Bracey still resembled it at all, and was surprised to find that the answer was both yes and no: insigne is a lot more brown and spotted. There is, however, a naturally-occurring variety called Paph. insigne var. sanderae, which is yellow and white like Betty Bracey, so it may be that sanderae was what was used for most of the Paph. insigne genes, in which case yes, there's a resemblance.

The contributions of the other species involved are tougher to figure out; it looks like Paph. niveum may be responsible for the wider, fuller shape (the petals on both Paph. insigne and Paph. spicerianum are narrower than those on Betty Bracey). Of course, the contributions wouldn't necessarily be visible anyway -- they could be imparting disease resistance or larger/smaller flowers or something like that.

I spent the better part of Sunday and Monday packing plants. One box is no big deal, but sixteen (the actual number I mailed) not only took forever1 but also left me sore, somehow.2 Also my face has decided to break out all of a sudden, so I'm getting that late-stage meth-addict look, which would be okay if I'd gotten the early-stage meth-addict euphoria as well, but I didn't, so I feel sort of cheated. This is admittedly hard to pin on the plant-packing, but since I'm already whining I'm going to throw it in anyway, 'cause who knows, it might be because of the plant-packing. 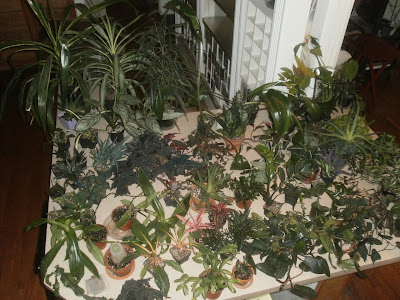 The plants I packed and mailed this week. Cuttings not shown.
If the pattern from previous years holds, this was the roughest plant-mailing week I'll have this spring/summer, so I'm almost ready to get back to something like making "actual" blog posts, whatever those are.


1 (Where "forever" = about 7 hours on Sunday and 5 hours on Monday, plus time spent at the Post Office)
2 (The title references the old joke, "I just flew in from [town] and boy are my arms tired.") However (surprise twist!), it's actually more my back than my arms.
Posted by mr_subjunctive at 3:00 AM 7 comments 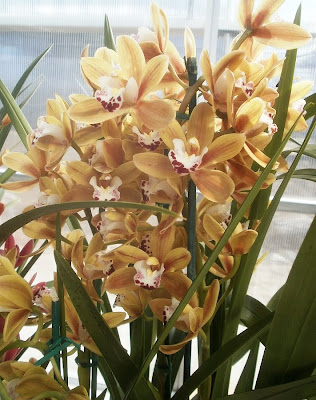 This one was on a vendor table at the show, with no tag, so:

I can't think of anything to say about this one. It's pretty much all there in the title.