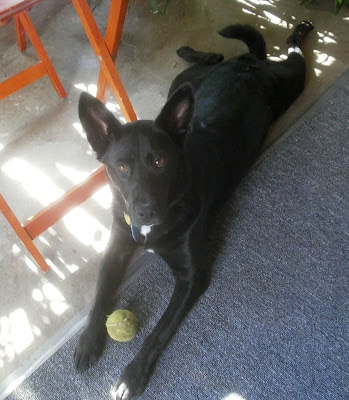 Nothing particularly interesting here. Sheba's a little freaked-out by fireworks, but we already knew that from last year. Nina got a new cricket delivery (though I have no idea how she's going to find/catch them -- I still haven't cut back the Pellionia). Same as it ever was.

Possibly of interest to the readership: I ran into an article at skeptifem this week that I thought was interesting, in light of how Cesar Millan has come up a few times at PATSP. The author's not one to mince words, as you can tell from the post's title: Cesar Millan is an asshole. I'm not necessarily endorsing this view -- I don't know Cesar Millan, I don't know anything in particular about dog training -- but she did manage to put a finger on something that's bothered me about his show but that I couldn't quite articulate, which is his tendency to come up with reasons why his techniques don't work for the dogs' owners only after they fail, rather than giving them more specific instructions first. It's very heads-I-win-tails-you-lose.

That's not the only criticism she makes, just the one that resonated with me. Go check it out (if you're so inclined) and let me know what you think. 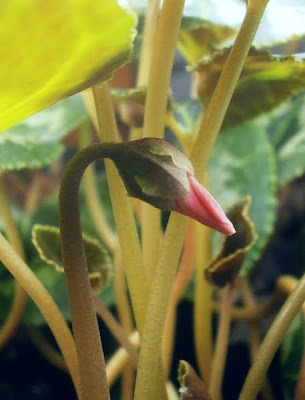 It looks like the whole Cyclamen experiment is going to be at least technically successful -- as you can see, all indications are that I'm going to have a rebloom at some point in the next few weeks. I suspect that the story would be different if I hadn't brought the plant downstairs and put it under the shop lights.

In other news, I found a short article in the Iowa City paper about the guy who fell from, and got smushed by, the telephone pole across the street; according to that, he was still alive as of last Sunday, but there were no details about his condition, or even a name. The pole is still lying in the yard across the street from us, and the blood stain is still visible (so I guess they didn't do as good a job washing the street as I'd thought).

One of the weirder aspects of the incident is that since Saturday, we've had a lot of people doing slow drives by our house. Wednesday afternoon, somebody stopped in front of our house, got out of his car, took several pictures of the stain, and then drove off. (I was watching from behind the Synadenium thicket in the living room window.)

I'm not sure how to process this. On the one hand, very little happens here, so it's a big deal when something does, and I can understand that. On the other, it's kind of ghoulish. And on the third hand, some of the people surely have good, occupational-type reasons for coming by. I mean, I'm assuming that someone's going to get sued over this sooner or later, plus the pole needs to be replaced, all that good stuff. So it's hard to be mad at people for driving by, but at the same time, I have this weird feeling that the scene should be private, that people are intruding, by slowing down to look at a spot on a public street. Not sure how to account for the feeling, but it's there anyway.

I did get a picture of the base of the post, not that anybody was clamoring to see. 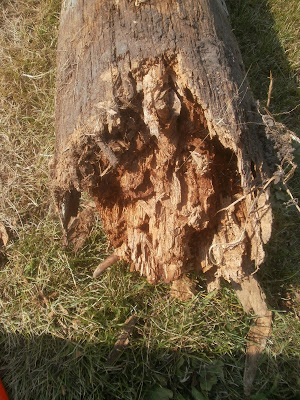 I can't really tell anything about what happened from looking at this, though I suppose we can rule out beavers, axes, and chainsaws. The husband thinks rot, which is probably correct. (The only other option I can think of is termites or other insect attack, and I don't see any tunnels in there.) Which means that the responsible party would be whoever owns the pole, and I'm not sure who that would be. (City? Utility company? Landowner?)

Anyway. Figured I should add this, since it's more information than I had in Saturday's post, if not by much. 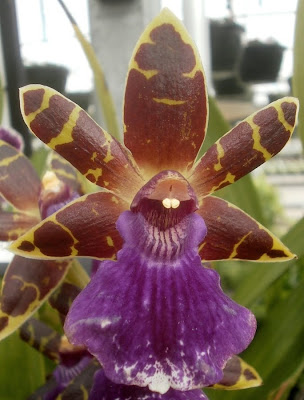 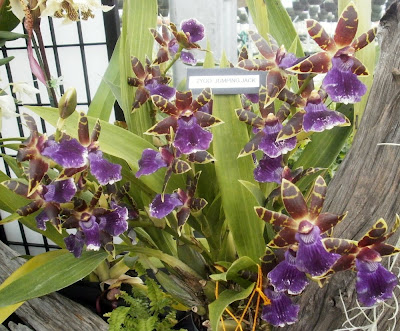 I tried to come up with something else for this post. The Pilea mollis (?) 'Moon Valley' in my office is blooming, and if you get them wet and then put them back into bright light, the flowers will release little puffs of pollen for about fifteen or twenty minutes afterwards. I vaguely recall reading something attributing this to the change in humidity levels.

(Other Pileas do this too. P. microphylla is called "artillery plant" because the little puffs of pollen "smoke" are reminiscent of the smoke from artillery fire.)

I've tried to photograph the pollen-puffs a number of times for you by now. Just clicking the button on the camera and hoping to get a lucky shot of pollen discharging at exactly the right moment hasn't worked. Using the camera as a movie camera hasn't worked either -- whatever set of flowers I focus on will never erupt, even if all the others do, just out of camera range. I even tried using IrfanView to take out a series of frames from a movie, hoping that either I could stitch them back together into an animated .gif, or I could crop out the interesting parts and put them all together into a series of still images, side-by-side, but IrfanView isn't capable of creating .gif files, and the image quality wasn't good enough for the series of stills to show the process. So I guess I'll just have to keep trying. You'd find it really interesting, I'm almost certain, if I could figure out how to show it to you.

Meanwhile, back at the ranch:

I got a Breynia disticha 'Roseo-Picta' in October 2008. One of the appealing characteristics of 'Roseo-Picta' is that it has variegated leaves, in white, pink, red, and green. Mine, though, was pretty much always plain green. I assumed this probably meant that it had reverted to plain green (Sometimes the new leaves would come in reddish and turn green with age, but the white/pink variegation wasn't there.) due to lack of sufficient light.

However, all that's changed recently. The first cutting to start producing white and pink leaves got traded away about six weeks ago, but another one has started doing it too: 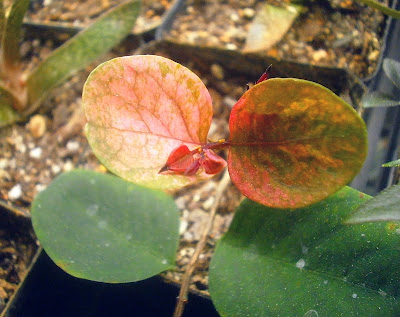 Still nothing from the parent plant (it occasionally produces leaves with a little bit of white flecking, but nothing as colorful as the above), but it's good to know the capacity is probably still there. The cuttings that have produced variegated leaves have been under shop lights in the basement, so I guess it must take a lot of light to get the variegation started.

Posted by mr_subjunctive at 3:00 PM 7 comments 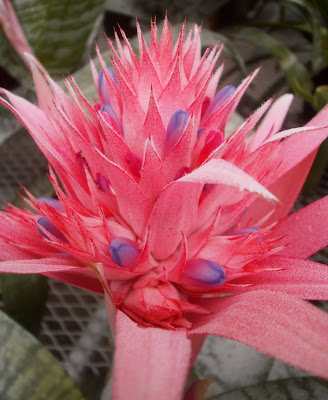 This is not my own plant; it was at the ex-job about three weeks ago. I like A. fasciata just fine as a foliage plant, but I have to admit, the inflorescences are pretty spectacular.

I had three Aglaonema varieties ('Gold Dust,' 'Maria,' 'Silver Queen') all flowering at once a few months ago, so I got out the old paintbrush and tried cross-pollinating. It wasn't that I expected anything terribly useful to come of it, but that was during the period when I was trying to cross everything I had, and there were flowers, so I figured why not try.

Most of the flowers have subsequently dried up and dropped, and so far only one appears to have done anything. Still, though, there is the one: 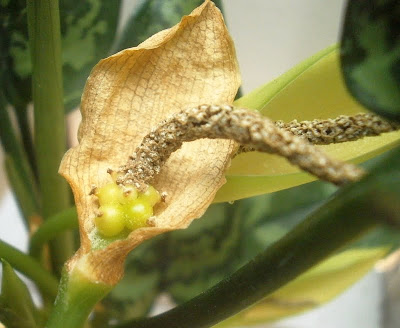 I assume sprouting the seeds will work more or less the same way it did for the Anthurium seedlings, should I be so lucky as to get viable seeds. While I'm on the subject, the first batch of Anthurium berries (from 'Gemini') look like they're going to be ripe soon, and there are many berries from Anthurium 'Pandola' coming right behind that.