Okay, well, the third part of the Anthurium update just doesn't look like it's going to happen anytime soon. So we may as well look at the other plants for a bit. A few of them are even doing things.

A very, very long time ago, in the halcyon days of August 2011, I managed to obtain some leaflets of Zamioculcas zamiifolia 'Zamicro' or 'Mini' or something like that. (The cultivar wasn't identified.) And I tried to start some new plants from the leaflets, as you do. Which went well, for once, and a year later I had actual plants, in tiny four-pack cells. 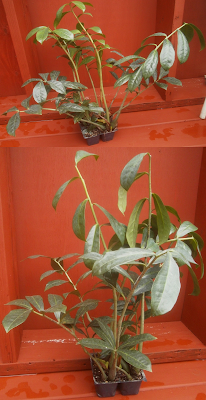 (June 27)
Three years after getting the leaflets, they're all still in four-packs, because I am terrified of repotting them. Repotting Zamioculcas, for me, has always gone badly, and although I think I know why these are doing well when previous Zamioculcas haven't,1 I am still scared to mess with them in any way. They're growing, I'm happy, they're happy: why fix what ain't broke?

And that's how things have been for quite a while. Then a couple weeks ago, I learned that if anything, I have underestimated how happy they are, because behold: 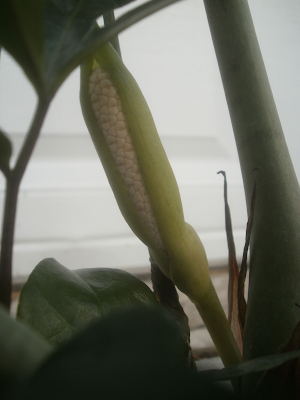 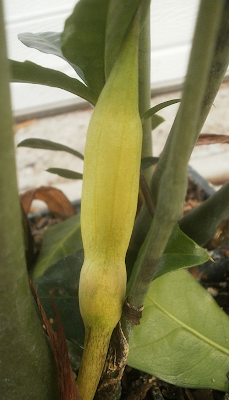 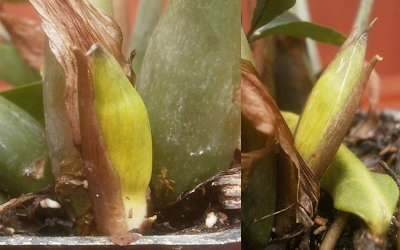 (June 27)
Though as long as it takes Zamioculcas to grow from a cutting, I can't imagine what slow kind of torture it is to grow them from seed. You know I'm going to try regardless, but I'm going to be crossing my fingers at the same time in hopes that the pollination fails.

The spathe never really get any prettier than it is in those first couple photos: 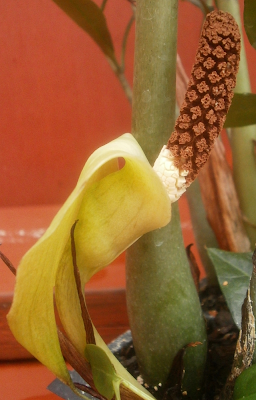 (This photo and the next: June 27)
But the way the spadix dries up is sort of interesting. 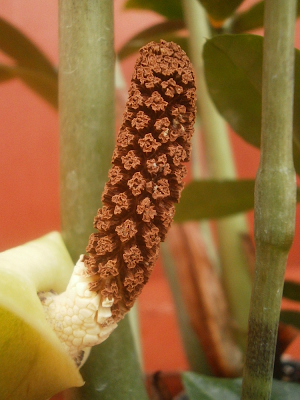 So that's something that happened. I'll let you know if I get any pollination. As much as I hope I don't wind up with seedlings, I am kind of interested in seeing what the berries and seeds actually look like.

1 A gritty, fast-draining soil mix, and shallow soil for the size of the plants. Previously, I'd been using pots with standard dimensions (as wide as tall), and regular potting mix. Short-term, this was usually fine, but given enough time, eventually something would happen and they'd rot.
Posted by mr_subjunctive at 3:00 AM 4 comments

Apologies for the continuing silence. The whole May/June stretch this year has just been one derailment after another: injury, illness, drama. And the drama is not necessarily over.

Posts are still coming, I swear, if things ever calm down enough for me to work on them. 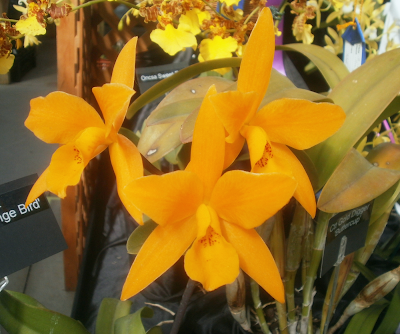