Efforts to bring the outdoor plants back indoors have kind of stalled; out of about 130-140 that were outside at the peak of summer, I've managed to find spaces for all but about 30-40 of those, mostly Agaves that may or may not have scale. So that's kind of both good and bad. And the scale situation inside the house hasn't really improved either; it's still confined to certain spots, as far as I can tell, but it's hit a few plants that I didn't think were scaleable. So I'm finding plants more depressing than interesting right now. What's ultimately going to have to happen, I'm afraid, is another purge,1 but that will take some working up to. (All the plants that would be easy to throw out already have been.)

So the post isn't a complete bummer (if I'm only going to post once every three days, I should try to make it pleasant enough to show up for), here's a Neoregelia 'Gazpacho' that's surprised me by blooming this month. 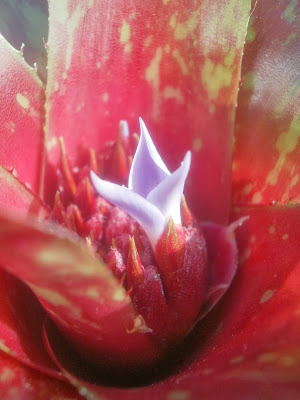 I knew it was old enough to bloom -- the parent plant flowered almost five years ago, and its offspring are now larger than the parent was then -- 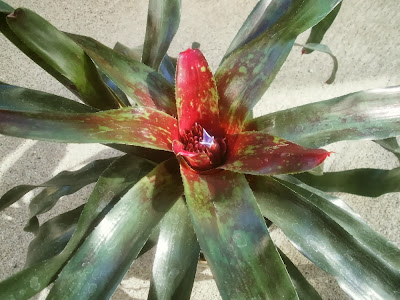 -- but it's been large enough to bloom for at least a year, maybe two, so the only reason I can think of why it would have chosen now is, I repotted it in May, along with the other two of the original plant's offspring. I also gave them a partly-obstructed south window, instead of a pretty wide-open east window, this summer, which may or may not have had something to do with it. (That still wasn't enough to give it full color: had I been able to grow it outside like it would have preferred, it would all have been red with green spots, instead of mostly green with a red-and-green center.)

The original 'Gazpacho' lived for another year and nine months after blooming, and about half to a third of the offsets survived. It would probably have had a higher survival rate if I'd let the offsets get a little larger before giving them their own pot. In any case, all three plants currently have at least one offset already, and the one from this post is going to start pumping them out now that it's bloomed, so I suppose I should brace myself for a Neoregelia population boom in the next year or two.

1 (I can't afford to buy the amount of imidacloprid it would take to dose every plant in the collection, never mind the amount of time and extra effort that would require. And there's no guarantee that, if I did spend the money, time, and energy, it would even be effective.)
Posted by mr_subjunctive at 3:00 AM 6 comments 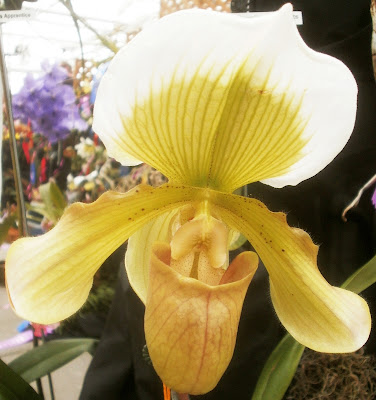 And now for something way less pretty than Thursday's Ananas post. 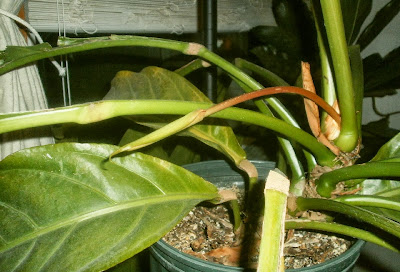 Which is not to say it's ugly, exactly. As Anthurium spadices go, the color is an interesting choice. There are more ornamental Anthurium hybrids with purple spadices -- my NOID purple-blooming plant has them -- but in those cases, the spathe is also purple, and there's an overall purple thing happening. With A. "hookeri,"1 only the spadix is purple. The spathe is dull green and narrow, and then the pollen is orange, which was surprising to me -- I'd expected white, powdery pollen like from the blooming andreanum / scherzerianum hybrids I mostly grow. 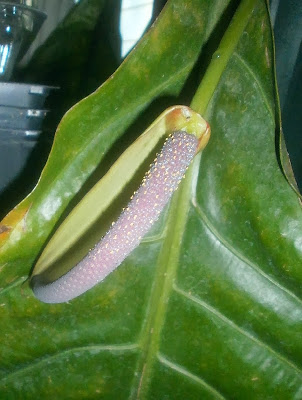 Granted, this isn't the best picture of the pollen. But it's there, and it's orange.
Anthuriums which are receptive to pollen produce small droplets of a sticky liquid (the better to hold onto any pollen that gets dropped on them, I suppose). It's a pretty minor thing with most of my Anthuriums, and in a lot of cases, I can't even tell when they're receptive, so tiny is the amount of fluid involved. Not so with "hookeri." Once it started producing fluid, it went a little nuts about it -- it's not been dripping on the floor or anything, but there's so much that if I try to dust the spadix with a paintbrush now, the brush gets all gunked up with what can only be described as an orange pollen-based mud.

It'd certainly be awesome if the plant were self-fertile. I don't have any room for more Anthurium seedlings -- there are already, as of last Friday morning, 225 of them here, and I suspect that "hookeri" seedlings would probably get big really fast. As it is, I'm already throwing out or selling off some of my plants to try to make room for everything coming in from outside. But you know I wouldn't be able to resist starting "hookeri" seeds anyway, were any berries to form.

As to how I got it to bloom in the first place, the only thing I did differently than usual involved watering: I had previously been watering it the same way as everything else. Take it off the shelf, plop it in the tub, water water water, splash of fertilizer, drain, back on the shelf. A few weeks before this happened, I got tired of lifting it on and off the shelf, which is difficult because of all the huge, fragile leaves. So I poured some water in, splash of fertilizer, and left it, without draining. I don't know why that would make the difference, and it's possible that this is coincidental and the blooming was going to happen anyway, but the change in watering sure seems related to the bloom. We'll have to try again in a few months and see what happens.


1 "Hookeri" is in quotes because this plant is probably not the actual A. hookeri. It is my understanding that the actual species is pretty hard to find, so clever and evil plant-sellers have just taken to calling whatever old Anthurium they have lying around A. hookeri, the logic apparently being that by the time you find out that you didn't get the species you wanted, they'll already have your money and so who cares. That said, when one takes into account the distortions in form (floppy habit, bigger leaves, longer petioles) caused by my plant having been grown indoors, there does seem to be a decent chance that my plant might actually be A. hookeri. The spadix is the right color, the leaf margins are sort of ambiguously wavy, and the internodes are short (especially for a plant that should be stretching toward the light). 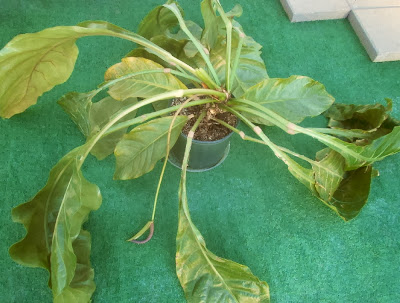 On the other hand, I haven't seen the black glandular punctates described at the link, and my plant's yet to produce berries, so I have no idea if the berries are red or white. (It's probably not going to produce berries, either -- I've tried smearing the pollen around just to see if something cool will happen, and I've also taken the pollen to the Anthuriums I'm breeding, same reason, but Anthuriums are not universally interfertile or self-fertile, so the odds are that nothing is going to come of that.) But at this point, I don't think I can rule out that I might have the real thing, even if the odds are still against it.
Posted by mr_subjunctive at 3:00 AM 1 comments