Two reasons for the recent long gap in posts: one, I got hung up on a name for seedling 226A (didn't like any of the four names that I'd come up with, couldn't find any names I liked better), and two, Japanese beetle season is upon us once again and it's way, way worse than previous years. Like, if someone told me that a count had confirmed that there were a hundred thousand individual beetles in our yard alone, I'd be like, only? Judging from my estimates of how many I'm catching in a jar of soapy water, the population is about ten times more than it was in 2015, and 2015 made me want to cry.

So I've been distracted and frustrated, is the point. Meanwhile, the Schlumbergeras continue to bloom (two first-time bloomers in July alone, and July isn't over yet), so the longer I stall on one seedling, the more work it's going to be to catch back up. (I am aware that I don't actually have to name the seedlings, but usually I like doing it.) So for the sake of making progress at all, I'm going to announce the names of a few seedlings I can assign names to, and we'll just have to come back around to the difficult ones later.

To begin, let me present Schlumbergera 382A Permanganate: 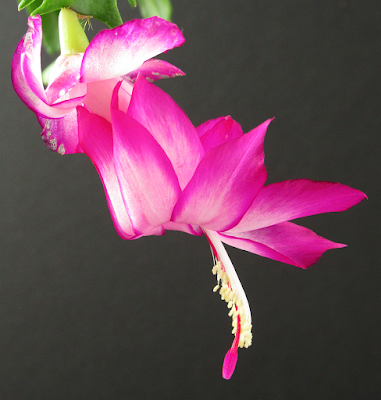 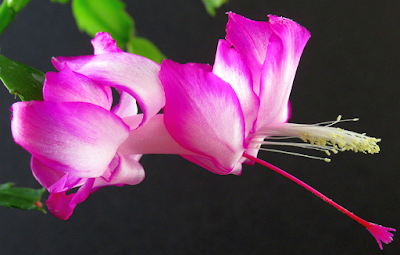 It's named for the chemical potassium permanganate,1 a strong oxidizer that also happens to produce intensely-colored solutions in water. Concentrated solutions are a very dark purple, but more dilute solutions are sort of pink-magenta similar to the flowers, so it works for me.

Rejected names:
Calmth (a state of calmness, by analogy with heighth or breadth; from the dialect dictionary)
It Is To Laugh (382A is another non-yellow offspring from the NOID yellow parent. The failure of the NOID yellow to produce yellow offspring is not exactly funny, but it's not not funny either, see 369A Punch Line.)
Jellybread (also from the dialect dictionary; bread with jelly on it. Really only works if you're imagining grape jelly, and even then the color's not quite right.) 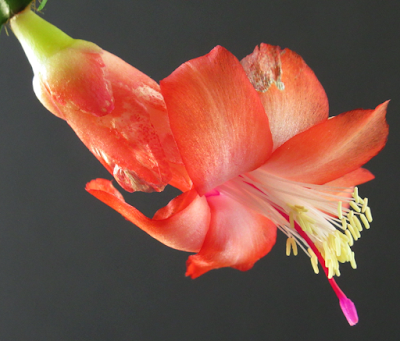 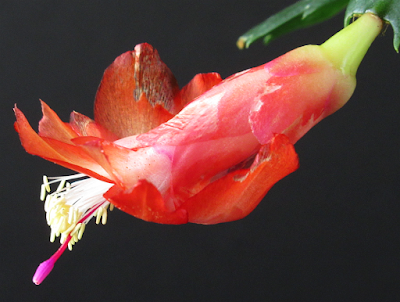 This is a reference to a moment when I was playing around with Half-Life 2 developer console, so I could use the noclip cheat and look around at spots which are normally not visible within the game. I don't remember what I did, but at some point the game gave me the error message "can't find the world." I didn't know what that meant, but the idea pleased me somehow, and I wrote it down as a possible seedling name. Then this seedling started to bloom but never quite finished, and the seedling seemed to match the name. I still haven't found out what "can't find the world" means exactly.

379A is also another non-yellow seedling from the NOID yellow parent. It turns out that mostly the NOID yellow produces more oranges, though for some reason we also got a couple magenta/white flowers out of it, plus a couple new combinations.

Rejected names:
Dysphoria (not really a reference to anything in particular; the flower just kinda looks dysphoric)
Flea-Bit Dog (mostly a reference to thrips damage, plus the "dog" designation for seedlings that don't turn out very well)
Fools Rush In (not actually sure what this one's supposed to mean -- maybe I was thinking that the plant was trying to bloom before it was actually mature enough to do so?) 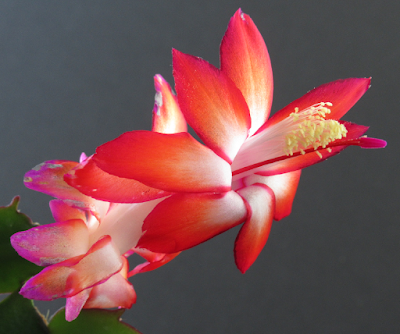 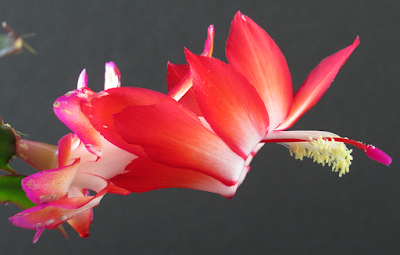 Speedruns are where someone attempts to play through a video game, or a level of a video game, as quickly as possible, often using unintended bits of the game code to bypass certain time-consuming scenes, or to travel faster than the game normally allows one to go. It works for this seedling because, while it's not technically a record-fastest bloom, 424A was nevertheless very quick to go from seed to flower.

Rejected names:
Alexis Carrington (character / main antagonist from Dynasty. The husband and I can now say that we've seen every single episode of the original Dynasty, by the way. I tried watching one episode of the rebooted CW Dynasty and it is awful, please do not watch it. Somehow it manages to be just as nonsensical and over-the-top as the original series without ever being even a little bit entertaining.)
Flamboyant Tendency (basically just a description of the flower in general; not really any deeper meaning intended)
Prismatic (a reference to the number of colors in the petals, though obviously they're not arranged in rainbow order like a real prism would produce, and other seedlings have done better at keeping the colors prominent and distinct from one another. Don't mind the name, but this wasn't the best seedling to give it to.) 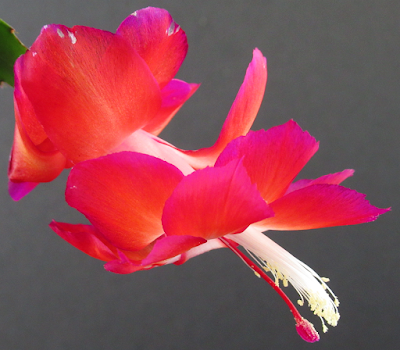 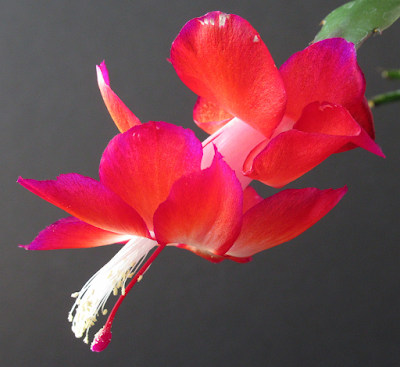 This is another chemistry-related name, though in a more roundabout way. I remembered that the element vanadium was named for the goddess Vanadis, which was a reference to the wide range of colors produced by vanadium compounds (Vanadis being the goddess of, among other things, fertility and beauty), but I didn't remember that Vanadis was just another name for the goddess Freyja.

The "turkey" portion of the name comes from the way some of the photos had the petals fanning out like a turkey's tail.

Both 424A Speedrun and 188A Freyja's Turkey are offspring of the NOID magenta. 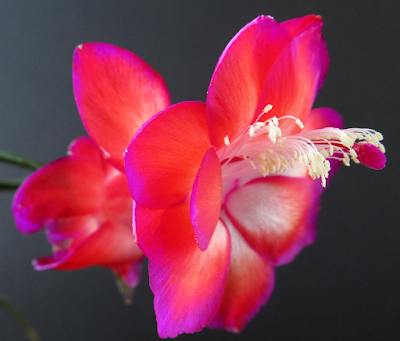 Rejected names:
Hetty Reckless (a runaway slave and abolitionist, who was part of Underground Railroad, fought against prostitution, worked toward improving education and skills in AA community, and just generally did impressive and good things. She's totally going to get a seedling someday, it's just not going to be this one.)
Rainbow Flag (another reference to the range of colors, though if we're speaking literally then it should be noted that like half the colors in the actual rainbow flag aren't found in the flower)
Vocal Fry (I think this was a reference to the slightly ragged edges of some of the petals? Or the way the thrips had chewed them up a bit? Mostly I just like having a term for the phenomenon, which I would probably otherwise never have even noticed.) 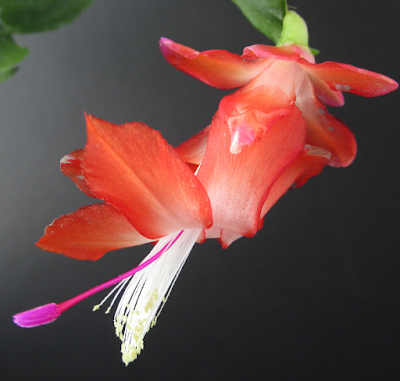 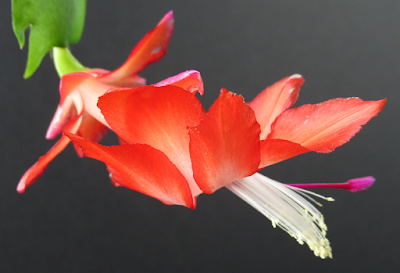 Yet another chemistry name, though since I've talked about neptunium before (in the post for seedling 239A Plow The Seashore, specifically footnote 3), I probably don't need to explain it again. The short version is, this is seedling 237, and isotope 237 is the most stable isotope of neptunium.

Clay Court (because it's approximately the color of clay tennis courts, and why not?)
Horseback Opinion (implying that the bloom wasn't well thought-out or well-planned; I found the idiom in the dialect dictionary, but it's apparently still known today, because The Free Dictionary has it. The implication is of an opinion offered so quickly and with so little thought that one hasn't even taken the time to get off one's horse first -- something unconsidered or off the cuff)
Snakeypoo (this one came from the random word combination "serpentine nickname." I asked myself what a good nickname for a snake would be, and "snakeypoo" is what came out. It amused me, so it went on the list. I don't think it signifies anything about this particular seedling: it's probably just that I was still finding it funny when I was generating the list of name candidates.)


1 Technically just the permanganate half; a positive ion has to be there to balance the charges, but it doesn't have to be potassium. Potassium is just a common counter-ion, for reasons I didn't bother to investigate. All my personal exposure to permanganate salts has been with potassium permanganate (KMnO4) as far as I'm aware.
2 (236A, 241A, 248A, and 252A)
Posted by mr_subjunctive at 3:00 AM 3 comments