Seedling 240 was actually the last of the three second-generation1 Schlumbergeras to bloom, but it somehow wound up first in the queue for blog posts. It's also the worst of the three, based on its one bloom to date: 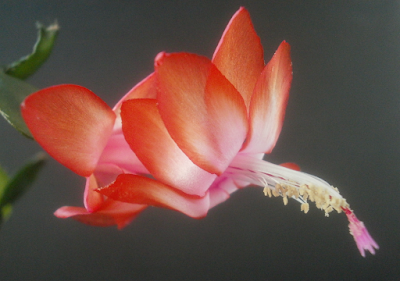 239A is a well-shaped, soft orange flower, and bloomed several times. 244A is unexpectedly red/pink, and also well-shaped. Neither are reaching new pinnacles of Schlumbergera achievement, but they're at least nice, normal flowers. 240A? I suppose it has the darker marginal pigmentation going on, which is nice, but the shape is weird, it only produced one bloom, and the color is the most common combination of colors in all the seedlings. So.

Name finalists: A Crack In Everything, Quick Regression, Schwa, and Unsupervised.

A Crack In Everything is a phrase from Leonard Cohen's song "Anthem," the full chorus of which goes "Ring the bells that still can ring / Forget your perfect offering / There is a crack in everything / That's how the light gets in." I'm not one of them, but some people find those last two lines heartening or encouraging or something.2 And it seems kind of appropriate, as a name for a seedling which is maybe slightly wonky.


Quick Regression is just a reference to the seedling not improving on its seed parent.3 Plus also just feeling timely.

Schwa is the vowel. That "uh" sound, like the A in "about" or the I in "pencil." Usually not stressed, and it's very common in English. I suppose it serves a function, but it's not melodious, not the sort of vowel Mariah Carey's going to hold a high note on or anything. In elementary school, when I learned about the schwa, I became weirdly fond of it, both for its symbol (ə) and for its name.4 I figure a placeholdery vowel is a natural fit for a placeholdery seedling.

And then Unsupervised. I'm not sure where Unsupervised came from.5 Maybe a reference to the fact that I wasn't paying attention to the cross I made, so I don't know what pollen parent helped create the seedling? And then the flower itself looking kind of half-assed? I don't know.

So. Not crazy about Unsupervised and don't even know why it's on the list, so I'll drop that. And A Crack In Everything is pretty long: even if I didn't feel weird about the song I took it from, it'd have that going against it.6

So for better or worse, this one's officially 240A Schwa.


1 (The seed parent was 025A Clownfish.)
2 Wait, Mr. S. -- what's wrong with "that's how the light gets in?"
I don't know, exactly? I mean, I've spent a while thinking about it, and I can't pin it down. I don't have a problem with the idea of everything being flawed in some way or another; that doesn't seem particularly depressing. And I understand how light entering something is, or at least can be, a positive symbol. It's possible that I'm just so literal-minded that I can't help but mentally add well, yes, and that's also how the mice get in, and the water, and the dust, and the mold spores. . . .
Though that doesn't feel quite right either. I don't know. I'm just not reassured.
3 Presumably also its pollen parent, but I don't know what its pollen parent was, so technically I can't be sure.
4 Possibly just the novelty of the consonant cluster "schw," which is apparently very common in German, but isn't something I ran into a lot as a kid, outside of maybe the occasional "Schwartzenegger." (Later, there would also be "schwing," and various German surnames, but schwa and schwing are the only English schw- words I can think of that aren't proper nouns. I really wish English would borrow some good Aztec words so we could get a few tl- blends in the mix; I'm unsure whether Aztlán is in common enough use to count, but it and quetzalcoatl are the only candidates I can think of.)
I wouldn't have been able to tell you in elementary school that I enjoyed unusual consonant clusters, of course. But obviously I can tell you now. Hell, this isn't even the first time the subject's come up this month: remember Svarog and svelte?.
5 The naming process is very complicated, with a lot of moving parts you never see because they are tedious and boring. Basically, I
A) generate a bunch of possible names from stuff like the random-words list, rejecting a lot of the word combos as obviously terrible, boring, or nonsensical, then
B) pick several names from the list of possible names that I think might actually suit the seedling under consideration, rejecting most of the possible names as a bad match, then
C) whittle those several names down to the four that seem best-suited to the seedling, and finally
D) actually choose one of the names, which is the only part you actually see.
All four stages are going on all the time, for different seedlings, which means that sometimes by the time I get to step D, I no longer remember what I was thinking when I let a name pass from step B to C.
6 And really it ought to be There Is A Crack In Everything, that being the full line. But the full line is 30 characters long and therefore unusable.
Posted by mr_subjunctive at 3:00 AM