Yet another roller-coaster in trying to track down an orchid name.

So. The tag said "C Mary Weiss." The International Orchid Registry doesn't have a Cattleya Mary Weiss, but it does have a Rhyncattleanthe Mary Weiss. So I was like, cool, problem solved. 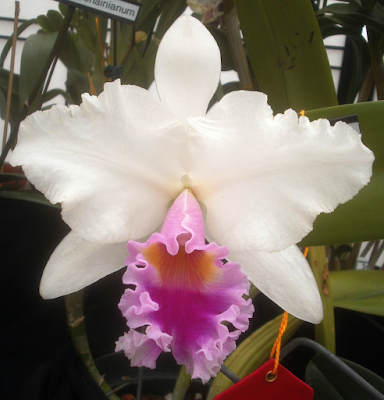 And then I looked for photos of this orchid in previous years, as I do, and found one from the 2013 show that looks nothing like this. Where this one is mostly white, with a lavender / orange / magenta labellum, the other Rhyncattleanthe Mary Weiss is mostly pink, shading into coral or orange here and there, and then with a pink / coral / orange / magenta lip.

So, great. While it's possible, I guess, that they could be very different seedlings from the same grex (and it's worth noting that the shape of the flowers is almost exactly the same in both cases, whatever the colors might be), I wanted to find confirmation that the grex had that much range in color. So I went searching.

Which is how I discovered that Rhyncattleanthe Mary Weiss is completely ogooglebar. Why? Well, both "Mary" and "Weiss" are common enough names that there are lots of people by the name "Mary Weiss," which would be a problem in any case, but more particularly, one of the singers in The Shangri-Las is named Mary Weiss. So a first search for Mary Weiss will get you more than you ever wanted to know about "Leader of the Pack,"


but nothing about orchids.

Okay, you're thinking, so just search for "Mary Weiss orchid," or maybe "Rhyncattleanthe Mary Weiss," then.

Presumably, it would be possible to get to images of Rhyncattleanthe Mary Weiss if you're already in an orchid photo database, but I don't actually have one of those bookmarked (partly because I've been unimpressed with the quality of the ones I've seen -- they generally have lots of names but are not so good with photos).

I did manage to locate a large group of photos of pollen parent Rhyncholaeliocattleya George King last March when I was preparing these posts, at orchidroots.org, but even that was a pain in the ass, because orchidroots.org changed into orchidroots.com at some point over the last year so my initial link was broken and I had to search for orchidroots.org to find orchidroots.com. In any case, the range of colors of George King (variously white, pink, yellow, coral, lavender, or orange, if the photos are to be believed) makes it plausible that Mary Weiss might be similarly variable, so there's a good chance that this plant and the 2013 plant are in fact from the same grex and are both properly called Mary Weiss. I would check the Mary Weiss photos on orchidroots.com for myself, except that there are no photos on the Mary Weiss page. Because of course there aren't. And there doesn't seem to be anything about the seed parent, Rhyncattleanthe Memoria Christine Sineni, anywhere on the internet either.

So I'm basically left to throw my hands in the air and just say I don't know if this is correctly identified. It may be correct to call this plant and the 2013 plant Rhyncattleanthe Mary Weiss, and if forced to guess, I'd guess that these are both Mary Weiss, but that's me gambling on orchid show tags being reliable. And if we've learned nothing in the last seven years, it's that orchid show tags are not reliable.

It is definitely totally possible that both plants were Mary Weis. Had both plants bore the same clinal name (let's say something like Mary Weis 'Snow White') but had different colors, then safe bet something was amiss. However, since any cross of Christine Sineni x George King will be a Mary Weis -- no matter what version of Sineni or King is used -- getting two different color forms is not in any way beyond the pale. Additionally, when complex hybrids are involved, the odds of significant variation amongst the hundreds of siblings resulting from even one seed pod is actually higher than one would typically expect.