The continuing story of Why Is Mr. Subjunctive So Damned Itchy All The Time:

Medical professionals have been consulted. Unfortunately, by the time I saw a doctor, the itching hadn't happened for a few days,1 so there was nothing to show anybody, not that they would have seen anything in the first place, because it never looked like anything, but there was even more nothing to see than usual. And so the visit was inconclusive as to the cause of the itching. We did pretty well eliminate scabies, mold, and imidacloprid as possibilities, though, which just getting scabies struck from the list was worth the trip all by itself. And this is all basically what I expected, that the first doctor's visit wasn't going to settle anything. I was really just hoping to pare down the number of possibilities.

There was also an incidental diagnosis of a very mild case of athlete's foot, though I don't know how that could have happened and am not sure I'm entirely on-board with that diagnosis2 but whatever sure I can get some Lotrimin why the hell not.

The leading theories are presently fleas, stress, and dry air/skin. The first will, in theory, resolve itself sooner or later.3 I don't know that there's much of anything I can do about stress, and trying to think of something to do about it would only make it worse, so probably the best thing for me to do about that is to forget that it's even a theory. And the dry air/skin thing is questionable, but the only one she had a concrete suggestion for, so I'm supposed to use different soap and then a new cream afterward and call her in a week to tell her whether that's helped. That seems kind of pointless, though, while I'm not experiencing any itching, because what am I going to report? "I changed soap like you said and went from having no symptoms to . . . also having no symptoms?"

Anyway. Not really feeling any better about the plant collection, and the contractors are actually worse now, 'cause they're done with the outside stuff, mostly, so now they've moved in. So regular blogging is still on hold, for however long it turns out to be. But I've just asked you to think, for a second time, about my skin, and scabies, and added a new horror: athlete's foot. So here is an orchid show picture to make us even again: 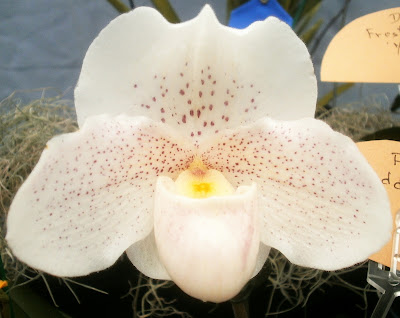 
1 Tiny bit of itching on Saturday, but nothing like it had been. No itching at all on Friday, Sunday, or up to 2 PM on Monday.
2 (it only vaguely resembles any of the images that come up in Google, plus this would be the first time anyone's ever used the word "athlete" in any kind of relation to me so it feels pretty wrong medically and linguistically. I mean, I realize she's the doctor and she would know, but still.)
3 Point of interest: I saw my first actual flea since this whole thing began, last Friday, on my arm. It's plausible that it may have come in from outside with Sheba (who had been outside immediately before, and who was in my office at the time because there were contractors present and she has to stay in the office with me while that's going on). It wouldn't necessarily make a whole lot of sense for a dog-preferring flea to jump on to a dog, then off the dog onto a person, but they call them fleas, not geniuses, so maybe.
Sheba remains at normal levels of scratching and biting; some patches of fur have filled in a lot faster than others, but there's general progress across the board, and she's done with all her medication as of Monday. Also she said to tell you hi.
Posted by mr_subjunctive at 3:00 AM 3 comments