As I've explained before, some of the pots of Schlumbergera seedlings contain more than one seedling, and consequently bloom in more than one color.1 021 is an example of this, though the two plants to have bloomed so far aren't dramatically different.

The first is, you know, fine. Orange. Not the deep dark orange of #025 "Clownfish," not a pastel orange like #024 "Bryce Canyon," it's just orange. After a lot of poking around in the TinEye search, I came up with a picture of a spider crab (Hoplophrys oatesii) on "soft coral," so I'm calling it "Spider Crab." 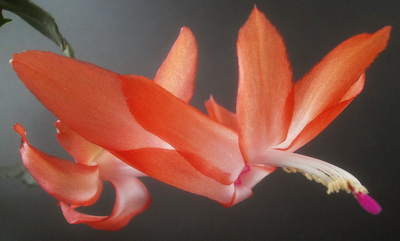 (As seedlings claim the more obvious photographic subjects from TinEye, the names are likely to get weirder and less obviously related to the flower colors. I would say I'm sorry, but I'm actually looking forward to more of this so I guess I'm not sorry.) 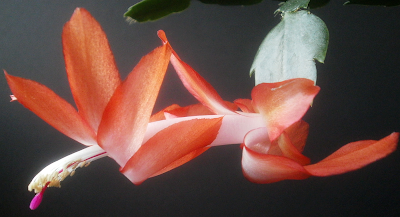 The second seedling in pot #021 is pleasant, though, or at least it photographed pretty well. The only real difference is that its tube is pink. (Technically, "Spider Crab" also has a pink tube, but you have to be looking at it pretty hard to see that it's not quite white.) 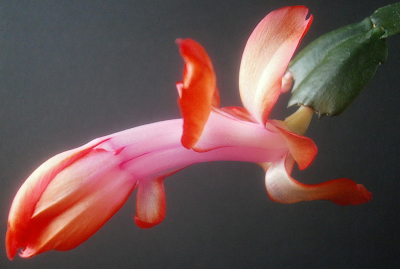 TinEye gave me a handful of birthday parties (of one specific child in particular, who seemed to be having a good time), and lots of images of people's food,2 so I'm splitting the difference and going with "Birthday Dinner." 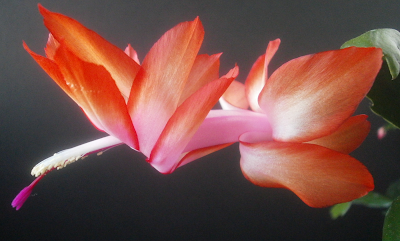 Also if anybody has any advice for ways I could mark the plants so as to be able to tell them apart when they're not in bloom, that would be appreciated. At some point I'm going to want to propagate some of these, and I won't be able to do that if I don't know which plant had the flowers I want to propagate. You see the problem.3

Joseph Tychonievich, in his book Plant Breeding for the Home Gardener, suggests embroidery thread -- it's not bulky, it comes in lots of different colors, it won't wash off in water, etc. That seems like a great solution for some kinds of plants (I'd use acrylic yarn because it's what I have already, but same idea.), but I'm hesitant to tie anything onto the segments because of how easily they pull apart. And the only other thing I can think of would be writing on the segments in Sharpie (bad idea: it'd wash or flake off by the time they bloom again), carving into the segments with a needle (permanently disfiguring, and in the event that the plant dropped the wrong segment, I'd lose the information), or sticking something through a segment (same problem).

So I'll go with the yarn thing if I have to, but I'm hoping someone else has an idea that will work even better.

And just for the record: no, dividing the plants is not an option at the moment. Not only are the roots all matted and intertwined with one another, making it nearly impossible to do without killing them (or at least setting them back quite a bit), but I don't have the room for the number of additional pots this would create.


1 As will become apparent later, this is sort of a Big Problem for me. If you decide to try to grow some houseplants from seed, and the plant in question is variable enough that you expect to get significantly different seedlings by doing so, pot the seedlings up individually when you start them. Yes, some of them will die, and then you'll feel like you've wasted a bunch of space or potting soil or whatever, but it's better than realizing later that you can't tell them apart unless they're blooming.
2 Why has it become a thing for people to take pictures of their food before eating it? I'm not necessarily annoyed by people photographing their food, and I don't think it makes you a bad person if you do or anything. I just don't understand who the photograph is for. I mean, they're not even usually very good photos. Are there people who find it entertaining to reminisce about specific meals they've eaten, but can't do it effectively unless they have a visual prompt? Are there people who are entertained by seeing pictures of meals that other people have eaten in their absence? It's confusing to me.
3 In fact, it looks like several of the plants don't intend to bloom again until next November, which is a long time to have to wait to figure out which is which: I may not have any propagated flowering-sized plants from any of these until the fall of 2017 or 2018. Possibly if I'm lucky, I'll see a few blooms in April or May and be able to start a little sooner, but even so. Would have been helpful if I'd anticipated this problem and tried to do something about it when I still could have, hence the advice in footnote 1.
Posted by mr_subjunctive at 3:00 AM 7 comments

I'm writing this on 12 January, so I don't yet know how many total posts this second round will contain, but there are at least five. This particular post covers the last named cultivar to bloom, 'Stephanie,' which missed the first named-cultivar post by a couple weeks. 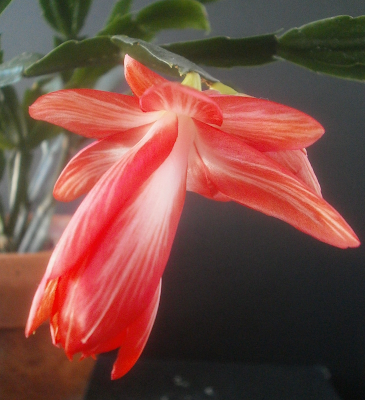 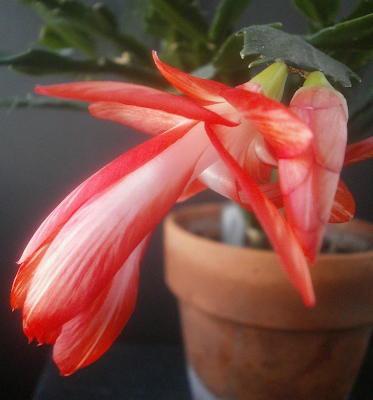 And no, I didn't get a photo of the flowers fully-opened, but I think you can extrapolate from the above pictures what one of those looks like.

This is the first time 'Stephanie' has bloomed for me, and I was a little disappointed with it. Not that the flowers aren't pretty, but it didn't make very many (I think there were five, total.), and I think when I got it, I was 1) expecting more of an orange than a red-orange, and 2) not aware that I would eventually have tens of thousands of orange seedlings. Though all that happened so long ago that I honestly can't remember what I was expecting.

In any case, voila, 'Stephanie.' Tomorrow we start back up with the seedlings again. Hope you like orange!

Next round of Schlumbergera pictures begins Friday. Are you excited? You should be excited. 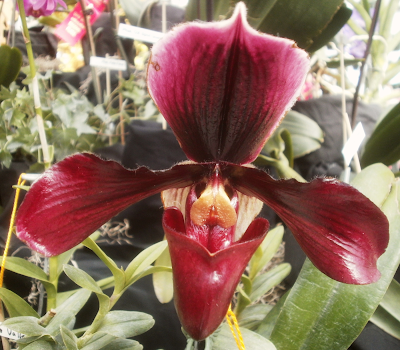