Last August, i was angry at my one Phalaenopsis. It had been producing a flower spike, the first since I bought it in March 2009. And then something unclear happened, and the top of the spike, the part with the buds on it, just kind of disappeared. The most likely explanation is that I caught it in the shelf above it when I was taking it out to water, and just didn't notice I'd injured it.

Readers counseled me to wait, that it might still produce some new flower buds off the spike as long as I left it on the plant. I believed the readers, in that I figured they were probably correct insofar as Phalaenopsis owned by other people might do this, but I didn't believe anything like that would happen in this case. I've had basically no positive orchid-growing experiences previously, so why should there be one now?

But, there appear to be new buds developing on the decapitated flower spike, eight months later: 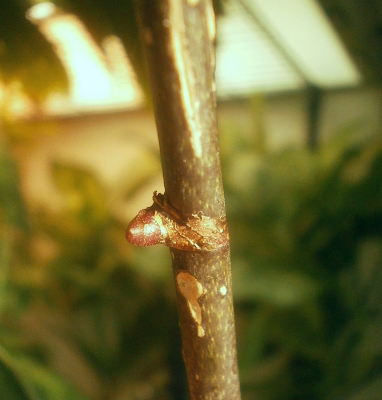 So . . . we'll see. It would be just like an orchid to produce another bud just to rub my face in it when some mysterious catastrophe happens to that one too.

The flowers weren't even that pretty, as I recall (a fairly plain solid pink-purple), so a successful bloom would be more of a symbolic victory than anything else anyway.

As of this post, I have something new to be mad at Google about. Yay.

Some of the photos I've uploaded have been looking "wrong" for several months, but I wasn't sure whether I was just seeing them differently, on the colored background, or if Google was actually changing them as I uploaded. Turns out they're changing them. The first time I tried, this is what I intended to upload: 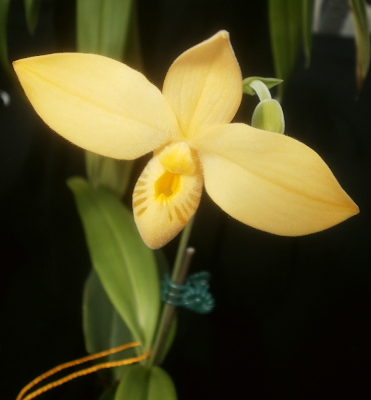 And this is what actually got: 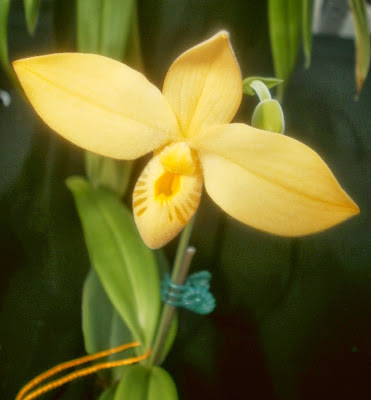 My pictures are already bad enough without Google going out of its way to make them worse.

Investigation (which I suppose I should note was via Google) led me to this thread in the Google Help Forums maze, where a lot of other people were reporting the same thing. The problem appears to be that at some point, Google set up default Google Plus profiles for everybody who was using Blogger, whether they actually signed up for Google Plus or not. When this happened, this created an "auto enhance" setting for photo uploads, which is switched on by default. It is possible to turn it off, but -- only if you make your Google Plus account official. There is apparently no other way to change the auto enhance setting.

I don't want to join Google Plus. I especially don't want to join Google Plus if they're going to deliberately shittify their products every time they want to push me to do something. I've been regularly frustrated with Google ever since they took over Blogger, and I keep thinking well maybe I should just move to a different blogging platform, then, but I don't do it because I eventually either get used to whatever changed, or I find ways of working around it.

In this case, there's a way to work around it: Google apparently leaves .png files alone -- only .jpgs get "enhanced." So, now I have an extra step to go through when I post a photo: changing the .jpg to .png. More work for me, to work around a stupid feature I didn't want in the first place, but I suppose I can do that. One of these days, though, they're going to do something that's impossible to ignore or work around, and that will be when the blog migrates elsewhere, or ends, or something.

My big huge Coffea is no more. Sort of. It always was multiple plants in the same pot, but the biggest one started dropping leaves and branches after it came in for the winter. Eventually I chopped off the top 5 feet / 1.5 m, give or take, but the leaves are still falling, just more slowly. I'm not sure what happened; my best guess is that having the plant sitting on the cold concrete floor of the plant room was too cold for too long. Though that wouldn't explain why the next-largest plant in that pot has done fine, and has added about a foot and a half (0.5 m) of new growth during the winter even though it was in the same soil. 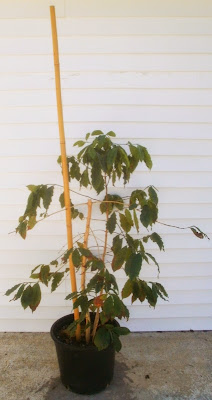 The plant used to be slightly taller than the stake.
Possibly light was a problem too: the Coffea had been living in the northwest corner of the plant room, which was cold, but bright. It was too big to put back there this winter, though, so it wound up further from windows, getting a lot less light.

In any case. The plant is dead(-ish), but it lives on in spirit, because I'd harvested a ton of seeds from it before it died, and those seeds have been sprouting for a few weeks now. (The tiny first batch took 57 days before the first seed did something visible, the big second batch took less than 67 but I don't know how many exactly; the big third batch took 45 days, and I'm still waiting on the big fourth batch; so far it's taken about 44 days, so I should be seeing sprouts very soon.) I've been pulling seedlings out of the vermiculite and potting them into soil when I see the seed leaves, like this: 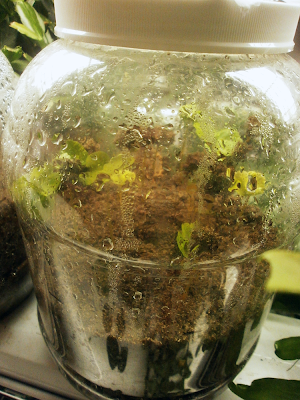 I've been putting three seedlings together per pot, and I'm already up to 26 pots, plus six pots from last year. It's theoretically possible, based on the number of seeds I harvested, that I could wind up with 150 Coffea plants at some point. I do like Coffea arabica a lot, and I never want seeds I start to fail, exactly, but in this particular instance I wouldn't mind if . . . fewer seeds succeeded than usual. 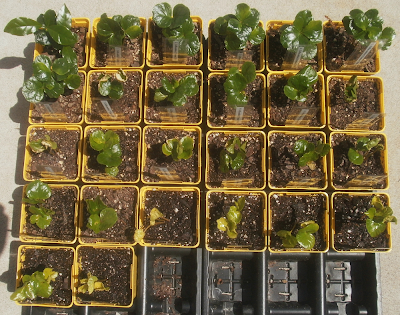