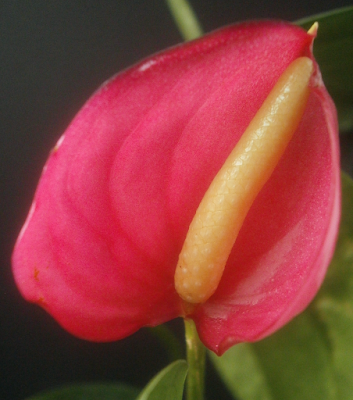 0206 "Marcia Dimes" is something of a chameleon: if I'm comparing her to the pink spathes (like 0239 "Russ Teanale"), she's purplish-pink, but compared to the purplish-pink spathes (like 0231 "Rhea Listick"), she's pink. I mean, this isn't the most amazing thing in the world or anything, but it's unexpected: Russ is the only pink / yellow combination I've gotten,1 but there are a whole mess of purple-pink / yellow and purple-pink / white blooms, and they're all very close in color.2 I'm sort of surprised that it's possible to wind up with a color that's in between pink and purple-pink.

In any case. It's possible that this will be one of those cases where the first bloom is a different color from the later ones, too. Whatever color Marcia lands on, it'll be nice enough, I'm sure -- I am particularly fond of both the pink / yellow and purple-pink / yellows, so I don't think Marcia could actually get this wrong. 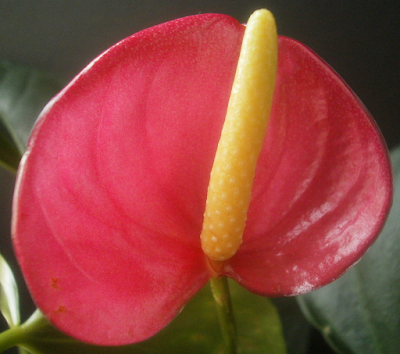 The leaves have two noteworthy qualities. The first is that they have an unusual texture. I spent a while trying to come up with a good description and couldn't, so I'll just leave it at, Marcia's leaves are less glossy, and the veins less prominent, so there's sort of an impression of smoothness happening. 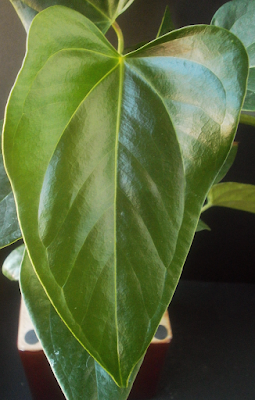 This actually isn't something I like particularly -- I prefer glossier leaves, and more complicated-looking venation3 -- and it's not unique at all, but it's particularly noticeable with Marcia.

The other notable feature is that the thrips have mostly left the foliage alone. (The spathe too, as far as that goes.) This by itself would mean Marcia's a keeper, but then to have a nice bloom, in a pleasant / interesting color, on top of that? Yowza.

The plant is also relatively compact so far: long internodes have dampened my enthusiasm about a lot of the other seedlings. Among other things, plants with long internodes are much, much harder to water, because the plants get tangled in one another. 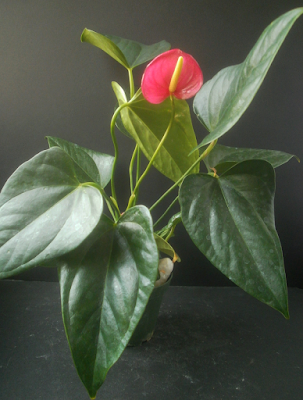 So there you have it. Not the best seedling ever,4 and not even my favorite from the recent batch of first-time blooms,5 but still in the top 25% or so of the blooms to date. 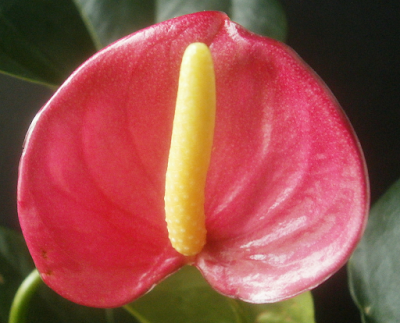 Next post: Anthurium no. 0510 "Victoria 'Porkchop' Parker," who is interesting even though she hasn't bloomed yet.


1 Unless you count 0040 "Ivy Winters." I'm not sure I do -- Ivy was sometimes a little too orange to call "pink." (The past tense is because Ivy is now living in Texas, not because she's dead. In case you were worried.)
2 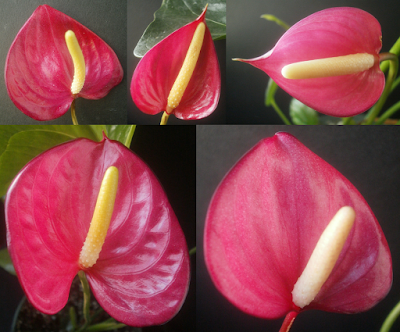 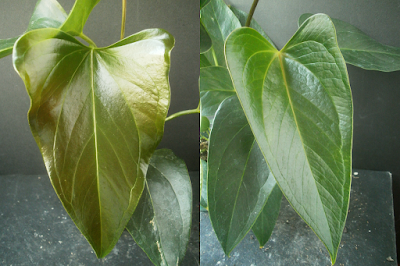 0005 "Chad Michaels" (L) and 0076 "Bob Humbug" (R)
Chad has the sort of color I like, plus an interesting shape and a high gloss; Bob I like mostly because the leaves show all the veins (which may be more obvious if you see the full size version of the photo) and are a bit thicker and stiffer, giving it a sort of leathery, reptilian texture. They both look like they'd be interesting to touch. Marcia, on the other hand, gives the impression that touching her leaves would be sort of like touching the back of a computer monitor, or some other matte plastic thing. Which is not that far off, actually.
4 The very short list of seedlings in the running for "best seedling ever:" 0231 "Rhea Listick," 0334 "Jean Poole," 0330 "Faye Quinette," 0120 "Eliza Boutisecksis," 0276 "Zach Religious." If the house were on fire and I could save one and only one of the seedlings, it'd probably be one of those five. But please don't set my house on fire so we can find out for sure, okay?
5 (That would be 0360 "Heidi Gosique," whom you will get to meet soon.)
Posted by mr_subjunctive at 3:00 AM 0 comments

I didn't actually notice any fragrance, despite the name, but then I never do, and even if I did smell something there would be no way to track it to its source, what with all the people and air currents and plants crammed cheek to jowl.

We've seen Purple Cascade before (2013), though possibly not this particular clone of it. 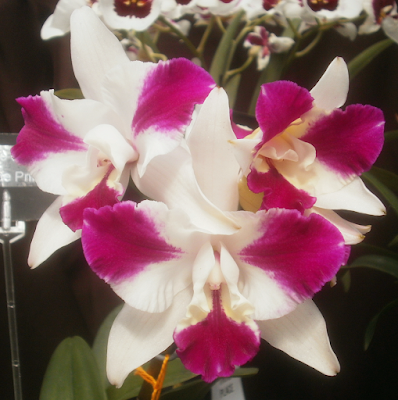 The picture's a lot better this time around, at least partly because I was able to get a lot closer to the plant. I did have to step over the fencing around the display in order to get the photo, but nobody seemed to object, or even to notice.

I sorta thought by this point that I would be up to writing new posts every other day, but every time I get close to being caught up, some new unusual thing pops up and I have to burn an afternoon on going to the dentist, buying potting soil, taking plants to the consignment store, mailing plants out, or catching up on the watering I didn't do the previous day because I was too exhausted to finish. Stuff like that. Consequently, I don't have time for the blog very often, and when I do, I usually don't have the photos ready for whatever post I want to write. So basically it's been six weeks of working as hard as I can and never quite getting caught up on anything, and I'm tired.

Quite a few Anthuriums have bloomed for the first time since I last blogged about 0112 "Dottie A. Rebel" way back on June 7,1 and there have been new first-time buds on many more, though some of those subsequently failed to develop.2 As usual, some of the new blooms are crap, most are boring, and a couple are very nice, but I won't tell you which are which because I'm still hoping to get actual posts written about all of those.

This post is not about any of those, though. This post is about the recent notable deaths.

Yeah, that's right. 'Midori' is gone, after about eleven months. I don't know what happened there, exactly: it was a watering problem of some kind, possibly exacerbated by excessively hot or cold temperatures, but by the time I realized that there was a problem, it was too late to determine what had caused it or do anything to bring the plant back. This is the first time I've completely lost a named variety of Anthurium in such a long time I don't even know how long it's been. (The NOID purple is kind of still on the ropes, but the original plant, after being cut back, has a single sprout, and I also rooted the cuttings I took off. One set of cuttings was potted up in soil and is living in the basement; the other is still in water and lives in the plant room. It's been a long time since I got a bloom, and will probably be a lot longer, but the NOID purple is not yet completely gone.)

'Midori' wasn't the best at producing seedlings, either, it turns out. I've potted up nine so far, of which four are still alive,3 and there are another 16 seeds in the cupcake containers in the basement, which may or may not ever get big enough to transplant, and may or may not survive transplanting. It sure feels like 'Midori' seeds germinate and grow a lot more slowly than seeds from my other plants, though I suppose I may just be impatient.

It turned out that I don't actually need 'Midori,' because at least one of my existing parent plants (probably the NOID red) already has genes for green blooms, but it was weird and I liked it and it makes me sad that it died.

The other two notable recent deaths 4 are 0064 "Augusta Wynndt" and 0592 "Tess LeCoil." Tess you'll probably remember from February, when I talked about her . . . unusual growth. 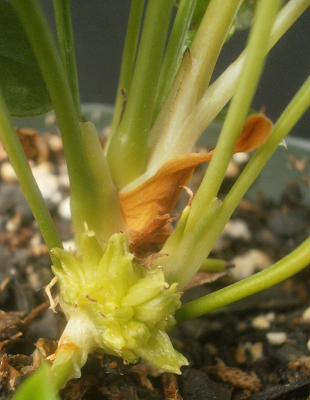 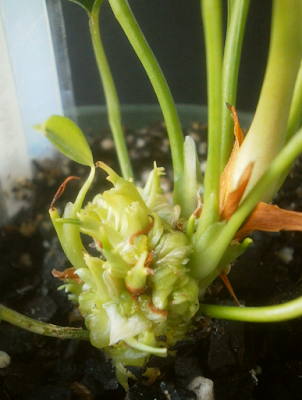 Photo: 11 March 2015.
For a while, the growth (one doesn't want to say tumor, though possibly it was) looked like it was even thinking of building some leaves -- you can see one in the above picture. I kept thinking, every time I watered it, oh, I should probably throw Tess away, there's no way that can be healthy, and if it's due to a virus or something I don't want it to spread to the other plants, but then I wouldn't throw it away because of the paperwork involved.5 Fortunately, it solved the problem for me, by spontaneously killing off that whole section: 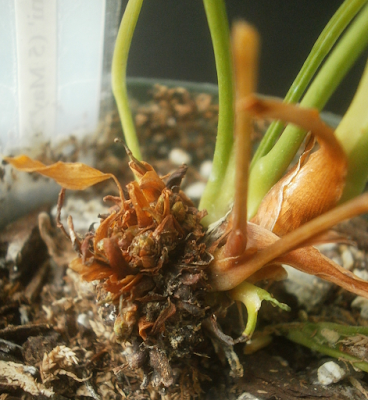 Photo: 27 June 2015.
Though 1) by the time that happened, I'd thought maybe I should . . . enough times that I still felt sort of obligated to throw it out, and 2) it looked like possibly it was gearing up to do the same thing all over again -- that stumpy little green thing to the right in the picture seemed awfully familiar.

0064 "Augusta Wynndt" never built up her bizarre growth to the size Tess did, but only because I wouldn't let her. For a solid three years or so, Augusta grew normally, but at some point during this last winter (I think?), the growing tip started to do whatever Tess had been doing. So I cut it off, thinking that the plant might make new growing tips, which would have a normal shape to them, but apparently things don't work that way. (In particular, check out the larger lump on the left center, which may or may not be doing what Tess did but in any case is clearly not developing normally.) So Augusta and Tess were thrown away on June 23, and that is that. 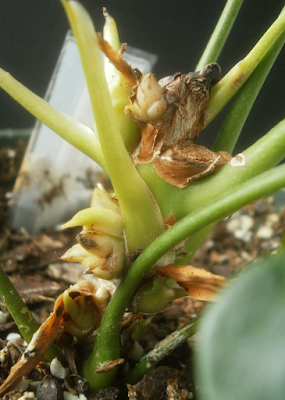 So there you have it. The next Anthurium post will be happier. Or at least less morbid. Probably both.