Well. "Pretty" picture is stretching the truth a bit. 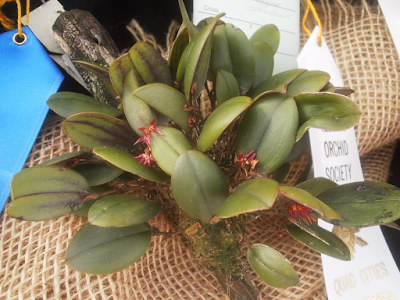 For a plant in the Marantaceae, Ctenanthe burle-marxii has been pretty easy to grow, and I've managed to propagate it a number of times (by divisions), and it's been relatively unbothered by pests. Apparently the Ctenanthes are just like that -- this post, which mainly talks about growing them outdoors, says they're pretty easy-going.

Also, if you're wondering: the "c" is silent. Dave's Garden says it's pronounced "tee-NANTH-ee;" I've been pronouncing it "ten-ANTH-ee." Potato, pohtato, maybe.

No Ctenanthes are commonly-sold around here; besides C. burle-marxii, the only one I've ever seen for sale was C. lubbersiana, and it's never at a size or price I could afford to get.1 C. burle-marxii itself was never actually for sale at the ex-job while I was there; my recollection is that shortly after I got Nina, I noticed a tiny, two- or three-leaved plant growing out of the soil on the greenhouse floor, and took it home for her terrarium, which it eventually took over, though I don't have any great photos of how much it took over. I was assuming when I brought it home that it was a Calathea, and then I thought Stromanthe for quite a while; it took a long time to figure out that it was a Ctenanthe.

In any case. The point being that it hasn't been a particularly difficult plant for me, but it's also never gotten me terribly excited, either -- it does its thing, and gets bigger, and it's handsome, and I like it, but it's never done anything new. Until now. 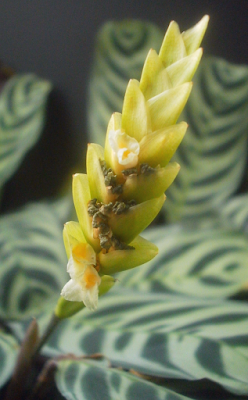 Which, this isn't especially pretty either, but it's the first time I've seen one bloom, so it's, like, exciting on a technicality, or something. And it's blooming a lot. This photo only shows three inflorescences, but that's because I couldn't fit the whole plant in the photo and still have the background. Really it's at least six: 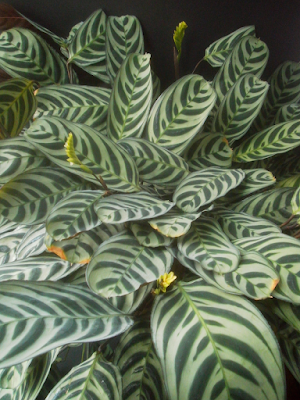 I should maybe mention at this point that although I'm not quite back yet, I'm expecting to slowly ramp back up to a more frequent posting schedule in the next few weeks. (I hope you want to see some pink Anthuriums!) At some point relatively soon, we'll see round 2 of the Schlumbergera seedlings for sale as well, if there's anyone interested in those.


1 I've seen them at Lowe's before, but in like 10-inch pots, which is too big. The ex-job had a couple once, also in huge pots, and for like $40, and I asked if they'd sell me a cutting cheap and they said yes but then it never actually happened for some reason. Which is probably just as well, 'cause it's not like I need any more plants that get huge.
Posted by mr_subjunctive at 3:00 AM 2 comments

So at the show this year there were two specimens of I-Hsin Balloon, and just like last year, I loved them both. Something about this particular hybrid really does it for me. 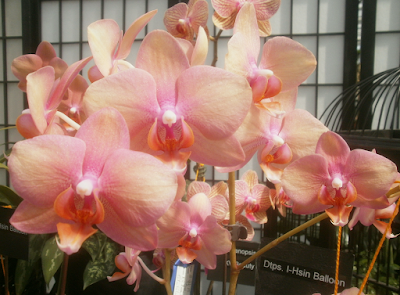 I was also pleased to note that the name on both was "Balloon," though I sort of knew before I even got to the show that that was likely how the tags would read.1 A couple days prior to the show, I got this comment on the 2014 post from "Marcia:"

I own this plant and I registered it exactly as Hausermann's label stated...it will be in the 2015 show at Wallace's...sure like to know who you are.

Which I'm not really that interested in whose fault it is that it was tagged incorrectly, since it's easy enough to see how it could have gotten changed. It's easy to drop (or add) a double letter. A smudge or piece of dirt could turn a lowercase "n" into a lowercase "r" easily enough, and while in most contexts "ballor" would be a nonsense word, it's not like "I-Hsin" is everyday English, either. 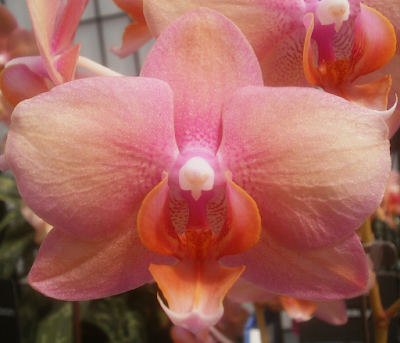 So anyway. I would like it if sellers, in particular, would treat plant names as important enough to double-check. I feel like the ID is part of the product, and if you can't be bothered to proofread your tags before you send plants out, that says something about what else you might be skipping over on your way to make a buck.2 I can't say that I've ever declined to buy something I wanted solely because of mistagging, but it does get me to look more closely at a plant, and often if the ID is wrong, there's something else wrong with the plant too.

It would be nice, also, if exhibitors in orchid shows would also double-check names, since orchid shows are a big place where the general public gets exposed to orchids, and if they see a plant they like and want one just like it, it's helpful to be able to search for it by its actual name. Plus, you would think that if awards are being given out, it'd be extra important to make sure that you have the names right. If you can get a blue ribbon for growing the biggest, most colorful, most beautiful Neostylis anyone's ever seen, but it's actually a Laeliocattleya, clearly something's gone wrong with the show.3 But Marcia says that was how the tag had it, and I don't doubt her, so whatever. It'd be nice, but it's not that big of a deal. 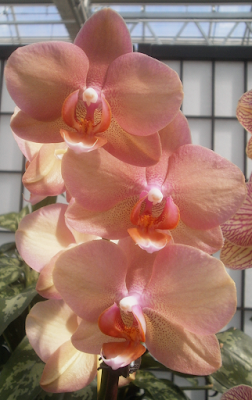 In any case. I left Marcia a comment back at last year's post, but she didn't respond, so we still haven't met. We could have -- at the show, I knew who she was,4 and I could have gone up and introduced myself -- but 1) I wasn't feeling especially social that day to begin with, no reason, just sometimes I wake up not wanting to deal with people and that was one of those days,5 2) call me paranoid, but "sure like to know who you are" sounds a little ominous if you read it the right way,6 and 3) when I first saw her, she had kind of a sour expression on her face, which is understandable in that by this point the show had been going on for several hours already, and I imagine it's kind of exhausting to be part of an orchid show even if you're an extrovert and you like being in orchid shows. I mean, I assume she's probably a perfectly nice person and she would almost certainly not have gotten me banned for life from the orchid show or framed me for murder or anything like that. But given 1) and 2), I had pretty much decided that I wasn't going to say hi anyway, so it didn't take much of a push to make that decision final. Next year, maybe. 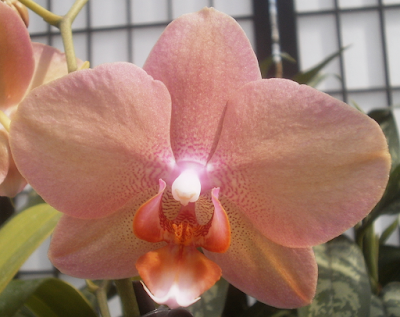 
1 Still with the "Dtps.," though, which is no longer accurate. Though given that botanical genus names have been in upheaval for several years now, and occasionally revert to their original designations, I can understand not leaping to correct it to "Phal." immediately.
2 Though even there, things will happen that are out of your control. I've complained a number of times about the Exotic Angel brand (started by Hermann Engelmann Greenhouses -- apparently in order to sell plants you have to have a double-N in your name somewhere, which is why I'm thinking about changing my name to Mr. Subjunnctive -- but Engelmann was purchased last year by Costa Farms) being terrible at getting IDs correct, and I think mostly that's because Engelmann didn't give a shit, but, it's also the case that customers will switch tags around, with or without malicious intent, or that a tray of plants will get knocked over and dumped out on the floor on the day when the person who knows what everything isn't scheduled to work.
It remains to be seen whether Costa will do a better job with the tagging than Engelmann did, though I am not optimistic, considering my previous interactions with them: see the Strelitzia incident or the more recent Anthurium incident.
3 Not that anyone would make that particular error: I'm using a deliberately ridiculous example. But you see the sort of thing I mean.
4 (Name tag, plus looking for Marcias on the Illowa Orchid Society's web page to confirm a surname)
5 Those days are becoming more frequent as I get older, a troubling trend when extrapolated into my 80s. I blame Facebook.
Not because Facebook necessarily has anything to do with it; I'm just trying out this thing where when I don't like something, I hold Facebook responsible for it. You'd be surprised how often Facebook-blaming makes sense.
Though now that I think about it, by the time I'm in my 80s, I will likely be dead, living in a radioactive hellscape searching through debris for small rodents to eat, or in a robot-staffed nursing home, and in all of those situations, being antisocial is unlikely to be my worst problem.
6 "Dr. ChaosDoom, stroking the Siamese cat in his lap and smirking at the video monitor, said 'I'd sure like to know who you are' to Captain HeroGuy. Outside, thunder crashed."
This reading is maybe even more understandable if you imagine that Captain HeroGuy had been complaining, a lot, and in public, about Dr. ChaosDoom's 2011 and 2012 world-domination plans being really poorly-spelled and factually inaccurate.
Posted by mr_subjunctive at 3:00 AM 1 comments