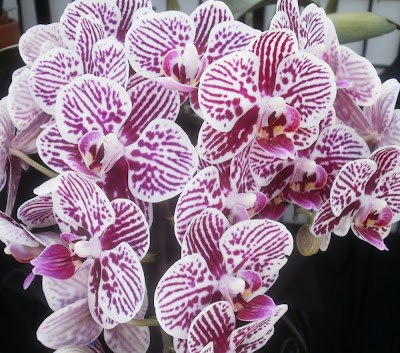 So one of the buds from the orange-flowering Hatiora NOID has finally opened. 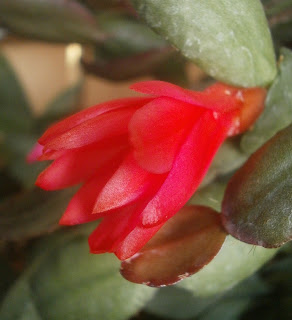 I guess I can't call it the orange-flowering Hatiora NOID anymore.

This is slightly disappointing. I would have been happier with orange; I bought it in the first place because the flowers were orange. On the other hand, it's hard to be too upset, considering that I had pretty much decided I never expected to see any flowers at all. It's a nice enough red, as reds go.

I'm looking for feedback about whether the new, wider blog template is working okay on computers other than my own. I haven't fiddled with the template much over the years, mostly because I'd figured out how to get the blog to do more or less what I wanted it to do and look more or less like I wanted it to look, and didn't see much point to changing stuff just because everybody else was changing stuff. But then I got a look at the site on the husband's new, football-field-sized monitor, and realized you know, there really is an awful lot of blank space on either side of the text.

If it doesn't display well for enough people, I can change it back, or expand it in a less drastic manner, or something, but for myself, I kind of like this version, so I'm inclined to keep it like this if nobody has any huge complaints about it.

Here is a picture of the Euphorbia milii hybrid with the big yellow flowers, just to keep this post from being completely unrelated to plants: 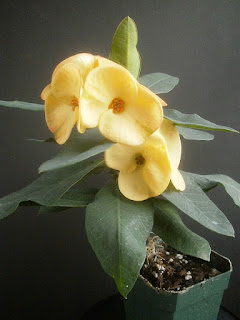 Posted by mr_subjunctive at 9:03 AM 11 comments

Among the casualties of the Scalepocalypse has been Manfreda undulata 'Chocolate Chips.' It did pretty well outside last summer, but even though it was in a clay pot, it got blown off the cart a lot and never made a lot of progress in terms of overall appearance. It'd grow for a while, get knocked over and lose a couple leaves, then grow for a while, then get knocked over, etc. It was managing to accumulate some foliage after I brought it inside in the fall (long, floppy foliage, granted, but it was foliage nonetheless), but then it had to go and get scale, so it got thrown out anyway.

I've used the Scalepocalypse to get rid of some things that I wasn't that fond of anymore, so a lot of the plants that I've thrown out will probably stay gone, but the Manfreda really kind of bothered me. Fortunately, the ex-job still had them, so I could replace it. This one's actually better than the original, in that there are two plants in the same pot, instead of just one like the plant I bought originally. 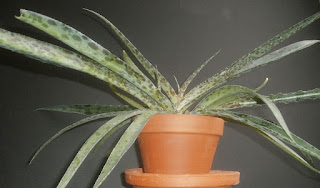 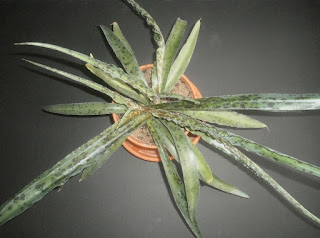 I've only bought two plants in the last six months. The Manfreda is the more recent (20 February); the other (15 January) is an Agave victoriae-reginae 'Pinguino,' which I bought mostly because we somehow managed to go to Reha Greenhouses when they were closed again, and even though they weren't technically open, they still opened up the store and let me and the husband wander around the greenhouse for a bit. I figured I should buy something. (I actually wanted 3" square grower pots. Nobody seems to sell the size of those I need, though, so the Agave was Plan B.)

Taxonomic note: the tag said that this was Agave ferdinandi-regis 'Pinguino,' not Agave victoriae-reginae 'Pinguino,' but officially, the former doesn't exist, and is a synonym for the latter. It seems to be the same as any other A. victoriae-reginae, except that the leaf margins are a different color (red-brown on this, usually white), there are sometimes small spines near the terminal spine (easier to see in the first picture below), the terminal spine is dark brown or black instead of green and white, and there are fewer and larger leaves. (Ref.) It's still a little unclear what the correct ID is; the tag said one thing, and davesgarden.com says another, A. nickelsiae. At the moment, Plant List says both are synonyms for A. victoriae-reginae,1 so that's what I'm going with. 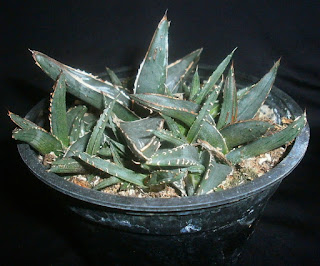 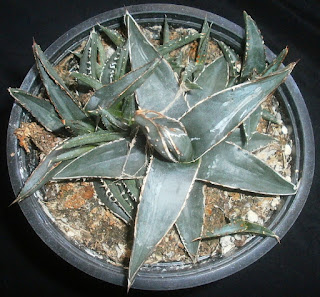 In any case, I had six Agave victoriae-reginaes already. A couple different kinds, even, so there wasn't much point to buying a third type, but you know how it is in a time of crisis; you want to stick with the things you know.

Plus I was having an Agaveish phase anyway. The last purchases before these two were the original Manfreda (13 June), and on 25 June, an Agave vilmoriniana2 and Epipremnum aureum 'Neon.' Apparently Agaves are comfort plants for me.3


1 Which Plant List doesn't even recognize the name "Agave nickelsiae," and suggests Agave nickelsii instead. Which is why we try not to rely too much on davesgarden.com.
2 Which has been fine, though I realized almost immediately that size was going to be a problem sooner or later. This is in a 6-inch (15 cm) diameter pot: 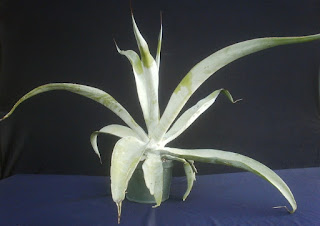 3 (Not that Manfredas are Agaves. But they're pretty close.)
Posted by mr_subjunctive at 3:00 AM 0 comments 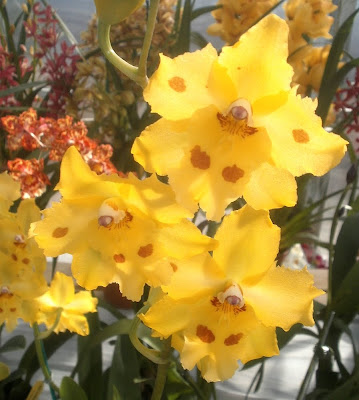