I spent a lot of yesterday working on a different, longer post, but it became clear that I wasn't going to finish soon enough to publish it today, so instead you get this. We'll call it a follow-up to the Leuchtenbergia principis profile.

I noted in that post that different sources gave wildly conflicting information about the color of Leuchtenbergia fruits, and guessed that they were perhaps just that inconsistent about fruit color. Since that post was written, my two mature plants' fruits have ripened, and in fact the two plants do not agree on the proper color for ripe fruit. The small plant's was pinkish-purple, 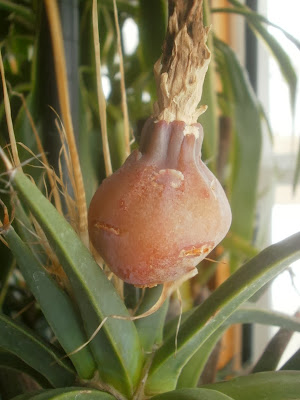 and the large plant's was yellow. 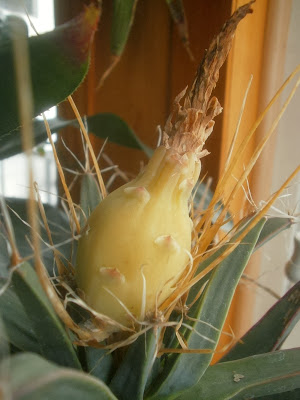 This is sort of backwards -- the small plant's flower was solidly bright yellow, but the fruit was pinkish; the large plant's flower was a pinkish, but produced a solid yellow fruit. So I guess the lesson here is that they turn whatever colors they feel like turning, at all stages of the process. Leuchtenbergias are the honey badgers of the plant world.

Both of the above photos date from last November; at the beginning of February, the small plant's fruit had browned and shriveled up, so I pulled it off, and I learned the truth behind another thing that had confused me while researching. A couple sources mentioned something about the seeds coming out of a small hole at the base of the fruit, which didn't make sense to me until the small plant's fruit came off -- the hole the seeds come out of is where the fruit was originally attached to the tubercule. (The way it was phrased, I'd thought that maybe the fruit stayed attached to the plant and, like, grew a hole on its side or something. Which didn't seem like a sensible way for a plant to go about distributing its seeds, but I thought maybe Leuchtenbergias were just kinda crazy. See above re: honey badger.) The dried fruit works more or less like a salt shaker -- seeds kept falling out of the hole as I moved it around. And it was basically packed full to begin with. 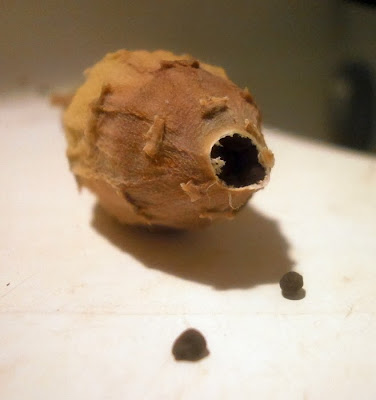 So I guess they don't actually need animals to find and eat the fruit, because the fruits will dry up and disperse the fruits all on their own. Which may explain the inconsistent fruit coloration: if you don't have to attract animals in order to get the next generation going, you can color your fruits however you want. So everything makes sense now, and I'm happy.

So, now, I have 15 seedlings in tiny clay pots in the basement, there's another six in the plastic container where I germinated them last May, I have maybe 70 seeds left over from the ones I bought, and I have an unknown number in the two fruits. So for the love of all that is good and pure in the world, please, if you are at all interested in having seeds or seedlings of Leuchtenbergia, send me an e-mail and ask. Something can be worked out, I promise.

I've mentioned it before, but it bears repeating: I cannot wait for the day when every combination of "good" words has been used up for orchid hybrids, and the hybridizers have to resort to names like:

It's gonna happen someday. Maybe not in our lifetimes, but someday.

They'll probably still be pretty, though. A rose by any other name and all. 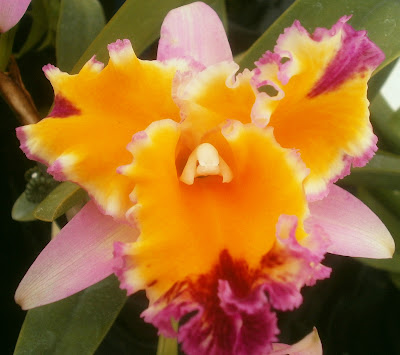 For unknown reasons, I've gotten two e-mails in the last week that asked how to subscribe to PATSP, and . . . well, I have no idea how to answer them, aside from telling people to find a feed reader and subscribe to the PATSP RSS feed. It's not a problem I've had to deal with personally, because Blogger comes with a feed reader and has not yet given me any reason to look for something else, but if people are going to keep asking, I suppose I should try to figure out a good answer. People especially seem to want to know how to get new posts sent to e-mail. (I'm kind of against that, since I want you to have to come here to read it -- if you don't visit the page, I have no way of knowing you ever read anything. But I can't make you come here if you don't wanna.)

So: how do you keep up with new PATSP posts? Feed reader? Just check in every so often? Something else? What should I be answering, when people ask how to subscribe to PATSP?

Posted by mr_subjunctive at 3:00 AM 10 comments