This didn't photograph well; the flower spike was tall enough that it was higher than the display's background, so I caught a lot of greenhouse roof in the photos and it got kind of washed out. Which is too bad, because I was very impressed with it. Not only is the color neat, but I don't think I've seen this kind of patterning before. 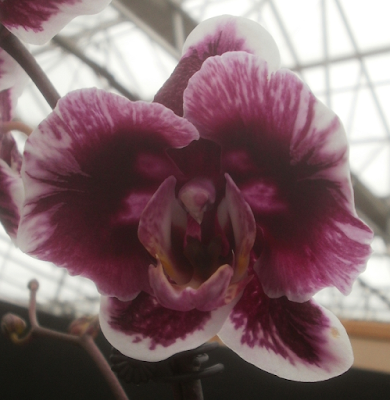 Unfortunately, I have no idea what its name is, so that's all I can tell you about it. 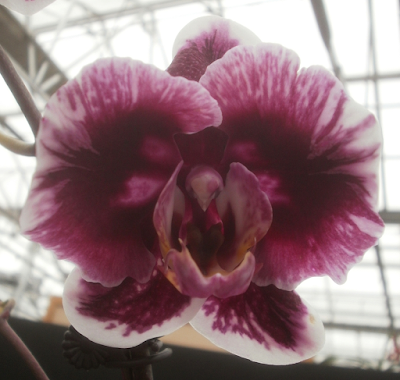 In unrelated news, letting the dill go to seed in 2015 did finally get me some swallowtail caterpillars. I've been trying for at least a few years, and this is the first year I've spotted any. 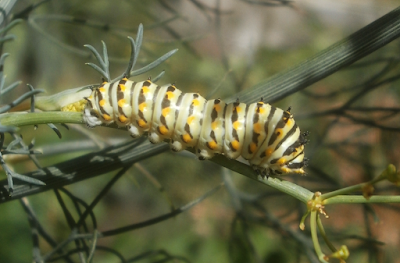 I think, based on what I've seen flying around this year and what I've seen on-line, that this is probably a black swallowtail (Papilio polyxenes). The caterpillars were only visible briefly; I don't know if birds got them or if they're pupas already. Happy to see them either way; it was maaaaaaaaaybe even worth all the dill seedlings I'm going to have to pull up next year.

As our regularly-scheduled reminder that 50% of seedlings will be below average, we have Joe. 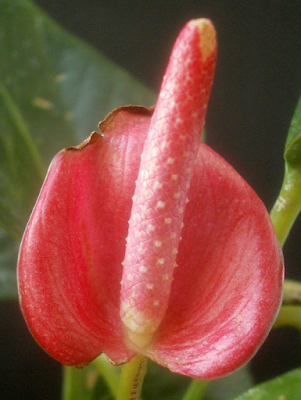 Hardly the worst seedling of all time, and Joe even has a couple positive characteristics. His color isn't the worst; he produces more flowers than average; he offsets well. 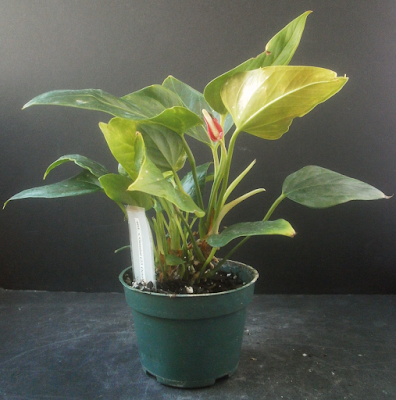 On the other hand, the blooms are also short (I had trouble photographing it because the leaves kept getting in the way), and the burnt spathe bothers me.1 The foliage is also more marked-up than I would like, though I've seen worse. 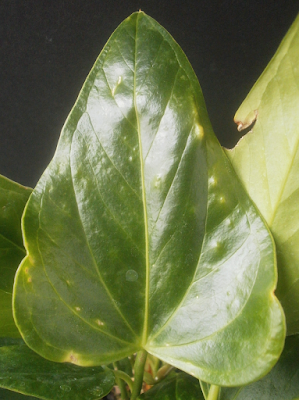 Verdict: Joe's probably on the way out, unless he manages to produce a healthier-looking bloom pretty soon.


1 I don't know what causes this; I would normally assume thrips, but thrips damage is usually both shallow (not going all the way through the spathe) and less broad (small patches separated from one another, as opposed to a large continuous dead zone along the spathe margin).
I can't rule out the thrips, but it doesn't look like them. Best guess: perhaps I'm letting the plants get too dry while the bud is developing or opening?
Posted by mr_subjunctive at 3:00 AM 0 comments

As I've mentioned before, I'm writing the seedling posts in the order that the new blooms appear.1 So it's a coincidence that I'm writing about a Lauren immediately after writing about a different Lauren. Laurens were just having a moment in mid-May.

This particular Lauren is just okay. The bloom is bigger than most of the recent first blooms have been, 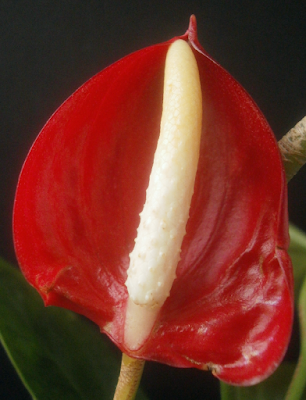 but it's a common color combination. Similarly, the foliage is fine: minimal scarring, 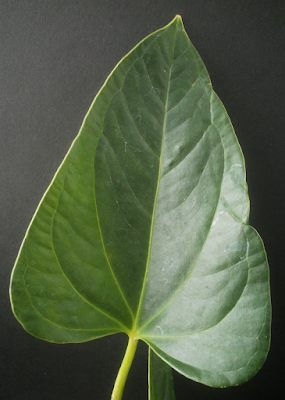 and there's a lot of it, 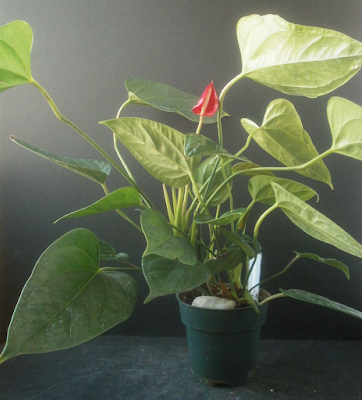 but it's not doing anything particularly new, either. Since this set of photos was taken, Lauren's revealed a tendency toward long internodal distances2 (which means the plant flops over a lot) and reflexed spathes.3 She doesn't have any specific qualities that make her terrible, but she also doesn't have anything uniquely awesome going on. So: a keeper, but probably only until I get desperate for space, at which point she'll be sold or discarded.


1 Among other things, this means that all the posts I'm working on now are about blooms that appeared three months ago. Which feels weird, but allows more time for the plants' qualities to reveal themselves.
2 I.e. relatively long segments of stem between leaves. The plant is still perfectly healthy, but compact plants are more valuable: they're easier to photograph, and remain in sellable condition longer.
3 I.e. the spathe flips back away from the spadix a few days after it first opens. This is also mostly a problem for photography and commercial production.
Posted by mr_subjunctive at 3:00 AM 0 comments

I wasn't nuts about Lauren's first bloom, which seemed like an ordinary red / yellow and flipped its spathe back besides. 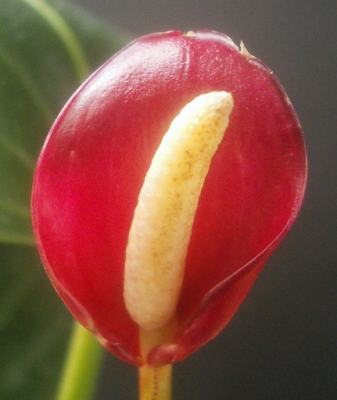 It got a little more interesting when the spadix started getting red polka dots to match the spathe, but that never wound up being pretty, just a little odd. 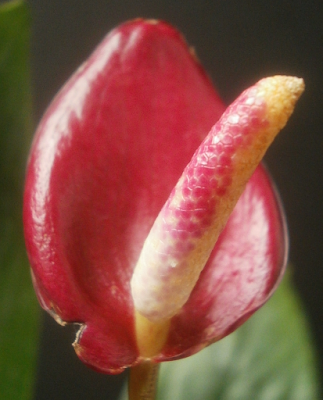 The second bloom was much better. The color was more interesting, it was less ragged around the edges, 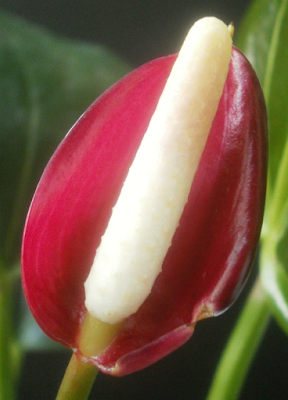 and when the spadix started changing color, it did so more smoothly. (It stopped short of going completely purple, though.) 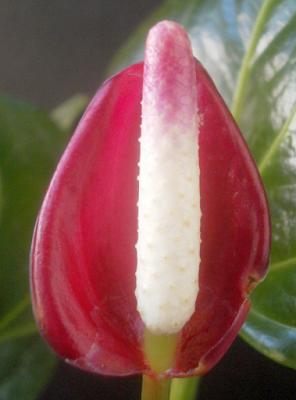 The flowers are pretty small, but a third one is about to open, so they're at least coming along relatively quickly, and the second bloom still looks good, a month after it opened. So Lauren has potential. I wish the leaves were a little more thrips-resistant, 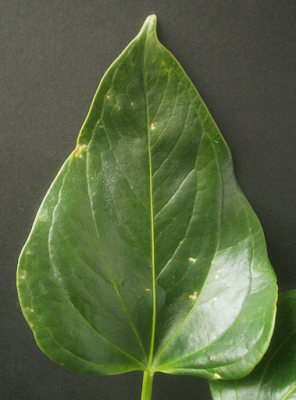 but the overall shape is nice and compact, 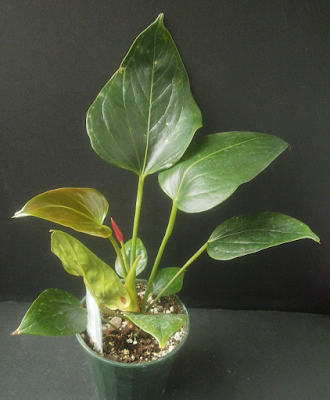 and the new leaves are fine. Though I don't feel like the bloom color and new leaf color coordinate very well. 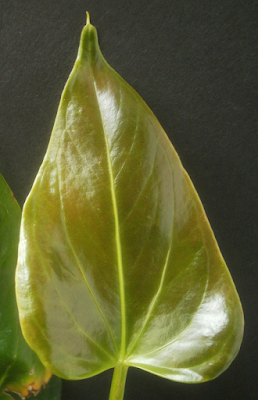 Overall, a definite keeper, and I'll move Lauren up to a 6-inch (15 cm) pot just as soon as I figure out a place to put her.

Best thing about Johnny is his foliage. Or at least that was his best feature while he was still alive: he got thrown out a couple months after these photos were taken, because his roots were rotting, or poorly anchored, or something. Not sure what the cause was exactly, but his problem was that he was falling more and more out of the pot.1

I suppose now, his best feature is his name, though I'm guessing the joke is lost on anyone under the age of 40. 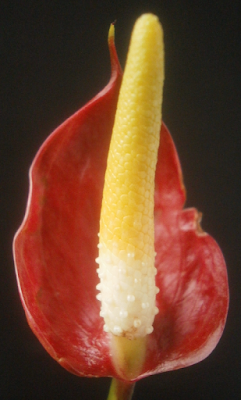 The flower was pitiful enough that I'm not too upset about the loss: small, thrips-scarred, boring color. 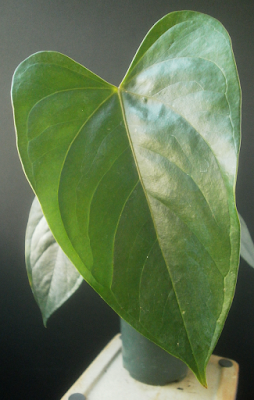 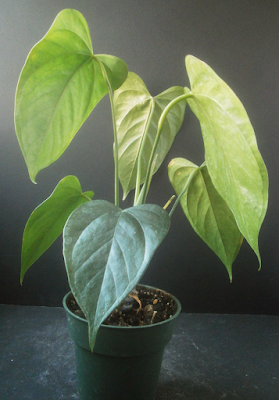 September 2015.
The first bud aborted, and it seems like a couple others must have as well, because it took eight months from first bud to first finished bloom. By that point, a number of leaves had come off. Can't remember why, but there are only two possibilities, neither good. Either the plant dropped a bunch of leaves spontaneously, or I saw scale and was hoping it was isolated to just a few leaves, so I pulled them off. 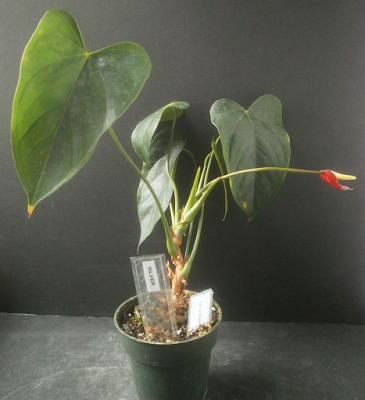 May 2016.
Johnny didn't reproduce, and won't be passing on any of his qualities, good or bad, so I suppose he's irrelevant, but I like to be thorough. There's a better seedling coming up tomorrow.


1 Sometimes this happens. Usually the precipitating event is that I pull the plant out of the pot accidentally, breaking roots in the process, and it fails to grow new roots to replace the ones that got broken. In cases like Johnny's, though, it seems like there were never many roots in the first place. I suppose root quantity and quality are genetically variable, just like everything else, so there will be root winners and root losers.
Posted by mr_subjunctive at 3:00 AM 0 comments