This was tagged Vanda at the show, and I really want it to be a Vanda, but technically it's a Papilionanda. Which shouldn't matter at all, because it was marvelous. 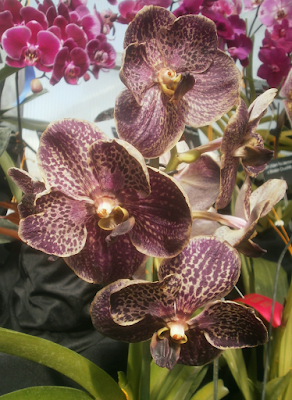 I really loved this one in person, just because it was so different from anything I'd ever seen before. Objectively, I know that a sort of desaturated gray-purple isn't going to impress many people, but it was so new (or I'm so jaded, whichever), that it kind of blew me away. 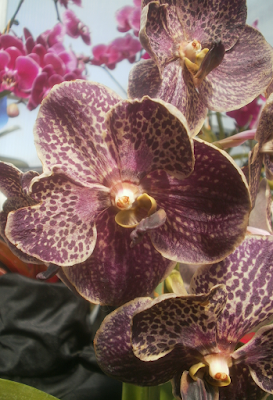 So a while back, someone suggested that one of the things I could write about w/r/t Anthurium breeding was that I'm selecting for plants that thrive in my specific conditions, and I was like, yeah, yeah, I know, I'm trying not to run out of things I can say about them, I'll get to it eventually.

But it started me thinking about whether or not this was even true, and . . . I'm not sure it is. Or it might be true, but not in the usual way.

The whole reason I'm breeding Anthuriums and Schlumbergeras in the first place, rather than, for example, Saintpaulia, is that they do pretty well for me in the house, so I've come to have a lot of them. (Saintpaulia not so much: they can't dry out as much or as often as I ask them to, and consequently don't stick around long enough for breeding to happen.) So breeding a plant that already thrives in my conditions to thrive in my conditions doesn't really make sense.1

However. There is one narrow way in which I absolutely am breeding the plants to thrive in my conditions, which is that "thrive" is coming to mean not only staying alive and relatively pest-free, growing leaves, and blooming, but also being fertile enough to convey those traits to a new generation. Which varies tremendously from parent variety to parent variety around here, and along several different axes.

I assume all of those traits -- bloom frequency, fertility, pollen production, berry development, seed germination -- are under genetic control to some degree or another, so over time, yes, the genes of the plants that are the best at making more plants will probably wind up all over the later generations, and I'll probably wind up finding it easier and easier to cross the seedlings as time goes by.2 So insofar as "thriving" means "producing offspring," yeah, I'm probably breeding plants to thrive in my conditions. It's just not deliberate, and except for the number-of-blooms part, it's not likely to make a difference in the commercial viability of the seedling.3

(If I did want to breed a plant specifically for doing better in my home conditions, I'd be better off to pick something that only barely grows for me now, where there's clear room for improvement. The problem with that is, most of the plants that I'd want to make better suited to my conditions would never bloom without much better conditions. I can think of all kinds of plants I'd like to play with for one reason or another, but the only ones that actually seem plausible are the gesneriads, specifically Saintpaulia, Episcia, Aeschynanthus, and Nematanthus, and I have actually tried to pollinate all of them at some point or another, with no luck.)

Anyway. So let's check out the seedling du jour:

Josie was a division from 0288 "Cookie Buffet," whom she resembles so strongly that I feel pretty certain Josie is a full clone of Cookie, not just a sibling. 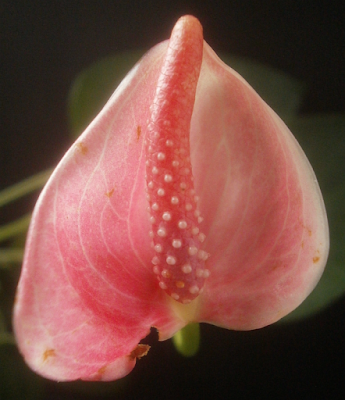 Both plants have broad, flat leaves, though Josie's photographed a little better: 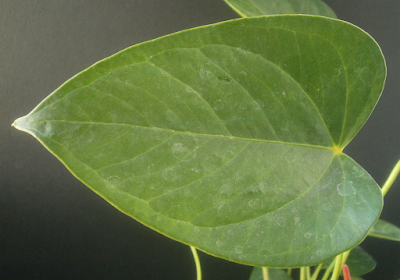 And both plants have long internodes and a floppy, tangle-prone habit. 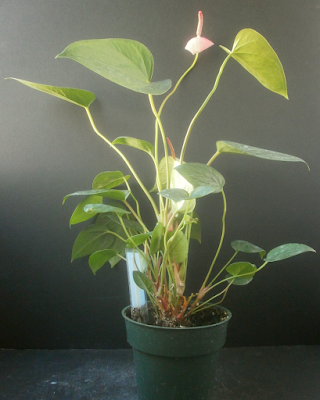 I may keep one or the other, I suppose, but I don't see any reason to keep both. Cookie's definitely been exposed to scale, whereas I don't know about Josie for sure, so I suppose Josie'd be the one to hold on to.


1 In fact, the seedlings, taken as a group, are much less hardy than their parents. A lot of that is because they're small, and as a result are much more susceptible to variations in temperature, humidity, soil moisture, and the like, but whatever the reason, it would feel weird to point to the Anthurium seedlings as evidence that I'm breeding to get more vigorous plants.
2 The first generation of seedlings vary about as much on various measures of fertility as their parents did:
• 0108 "Deena Sequins" blooms heavily, all the time; 0085 "Carson Trucks" almost never even tries to bloom, and when it does, about 3/4 of the time, the bud sticks in the cataphyll and it winds up snapping its own peduncle.
• 0234 "Ross Koz" is incredibly easy to pollinate, but 0035 "Alyssa Edwards" is impossible.
• 0076 "Bob Humbug" produces pollen, but 0276 "Zach Religious" doesn't.
• 0231 "Rhea Listick" makes berries that develop fully and have lots of seeds; I don't know how many times I've watched 0120 "Eliza Boutisecksis" start making berries and then drop the bloom before they finish.
For the moment, 0234 "Ross Koz" (purple-pink / yellow) and 0276 "Zach Religious" (pink / orange) look positioned to have the biggest influence on the F2 and F3 generations, both in the number of seedlings they've produced and the speed at which those seedlings have developed. A few of Zach's offspring have even been moved to 4-inch pots already, as well as one each from 0005 "Chad Michaels" and 0239 "Russ Teanale," so we could see the first F2 blooms as early as next June!
3 Though I have seen people using lack of pollen production as a selling point for new Spathiphyllum varieties. So maybe amount of pollen has commercial relevance too.
Posted by mr_subjunctive at 3:00 AM 2 comments

The photo should speak for itself, I think (right-click to view larger image):1 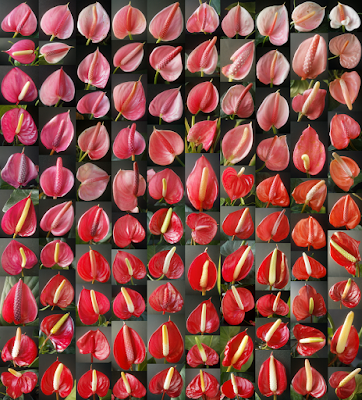 0212 "Rogue," in the post from Friday, was the 100th of my Anthurium seedlings to bud and produce a full bloom, which happened about a month ago. I then spent like a week and a half trying to create the above composite image for this post, which I know it doesn't look like a week and a half of effort but getting the colors to shade into one another, even this imperfectly, was a difficult problem to solve.

There are 8 new first-time blooms since I put the picture together a month ago, who you'll be meeting in October, and I'm watching another 13 buds that may or may not ever open. For a while this summer, I was seeing a new first bud every two days on average, which I'm pretty sure has never happened before.

So this post and image isn't the end of anything; the posts will keep coming. I'm just taking a moment to say, hey, wow, 100 blooms is kind of a big deal, and here's what four years of Anthurium breeding can get you.


1 Which is still not as big as the original 61.5 mexapixel version of the image. I didn't even try uploading the original file.
Posted by mr_subjunctive at 3:00 AM 2 comments

More orchid-naming madness. This was tagged "Wossner China Moon," without the umlaut. The International Orchid Register site's search treats ö and o differently, though, so if you search for the umlaut-free version, you get "There are no matches with your search selection. Please try again."

I mean, obviously I figured it out. But it's always something, with the orchids. 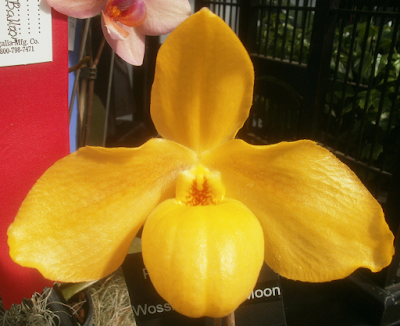 As far as the bloom itself goes, not a whole lot to say. It's very loud, but I suppose that's obvious from the picture. Also kind of awesome.