Ignore e-mail from me

AOL has been hacked; I don't know how long that will last. There's all kinds of potential badness from this, but I don't know exactly what to expect. I did change my password, but don't expect that to make a difference, as the hackers can presumably read the new password as easily as they could the old.

Am accepting recommendations if anybody knows of any secure good free e-mail services. (I am NOT interested in GMail, however.)

Posted by mr_subjunctive at 11:04 AM 6 comments

Labels: everything is crap, other, personal-ish 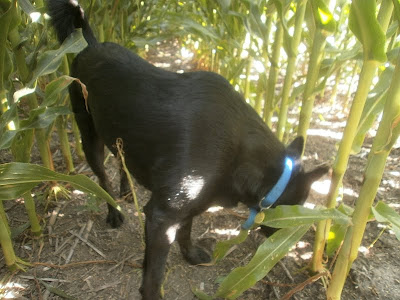 I was trying for a different picture than this, but Sheba doesn't like being in the cornfield and refuses to stay still long enough for a good photo.

The corn itself was more cooperative: 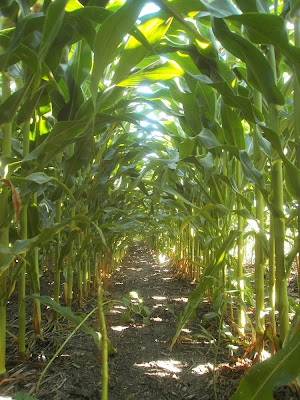 In non-corn-related news, I have deactivated my Twitter account. This is because I have consistently found that spending large amounts of time on Twitter causes me to become easily irritated by everything, all the time, for reasons I do not understand or even have particularly plausible theories about. Which irritation I then usually take out on people on Twitter. I figured it was best to stop before I'd pissed everybody off. 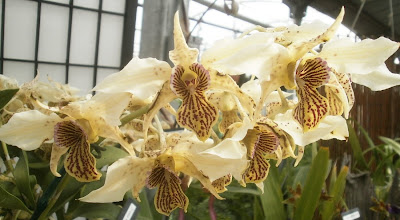 This Dendrobium has been on the blog before, but the orchid show had it again, so I took a picture of it again. 'Cause I'm simple like that. Pretty sure it was the same specimen again, too, because 1) how many can there be in the area? and 2) surely it can't be a coincidence that they had the same annoying, outline-breaking background up behind the flowers this year that they had last year, right?

I got a Huernia zebrina earlier this summer. When it arrived, it had a flower bud on it, but it dropped the bud within a few days, presumably as a result of the travel. Disappointing, but not unexpected. 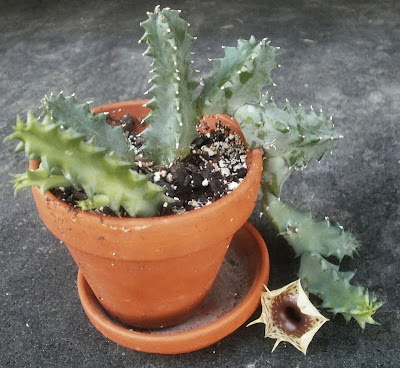 I noticed last week that there was a bud developing again, and on Sunday I saw it open for the first time. This isn't as open as it will get, but it's as open as it got on Sunday. 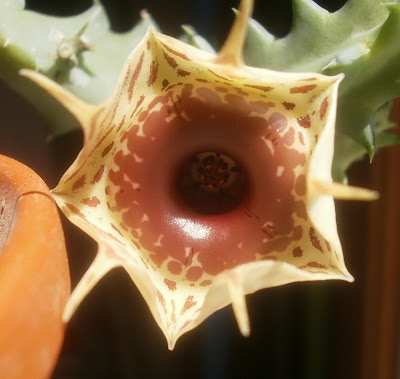 I didn't detect any smell, though I suppose that doesn't mean there wasn't one. Googling turned up a few claims of an "intensely fetid odor" and about the same number claiming no odor at all. I assume this means one of three things: either 1) odor varies from one specimen to the next, 2) odor varies according to the development of the plant, with some stages being less smelly than others, or 3) people are lazy, and will spout off about the odor of plants they've never actually grown or smelled. My personal guess, based on extensive direct observation of human beings and limited direct observation of Huernia zebrina, is that it's probably #3.

The color is not quite what I was expecting, either -- photos on-line are a lot more dramatically-colored than this. I'm assuming this is because the flower isn't fully developed yet (you can see in the above pictures that it hadn't yet opened all the way). There will be a follow-up post if I see a dramatic change in the appearance or smell.

Posted by mr_subjunctive at 3:00 AM 14 comments

This week looks like it's going to be busy for me again. I couldn't bring myself to water yesterday or Sunday, it looks like I'm going to be going in to Iowa City again on Wednesday, and if I don't hurry up and get busy putting some of my plants up on Craigslist I'm never going to manage to sell them all. (I'm still selling plants, by the way.) Therefore, transmitted light photos.

P. S.: For anyone who was wondering: Sheba appears to be just fine, without any intervention at all. There was a piece of the nail still hanging off when we first discovered the problem, and we'd assumed that we'd have to take her to the vet to get it removed on Monday, but it disappeared on its own on Sunday. She still didn't like us getting near it on Sunday, but as of Monday she wasn't being protective of the foot anymore. So we're assuming that it's resolved itself, though we'll keep an eye on it for a couple more days just in case. 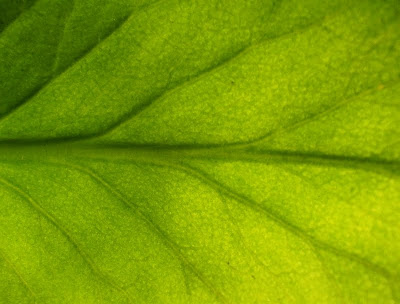 Bergenia 'Rosi Klose.' I'm not particularly familiar with Bergenia, although I probably should be (this picture was taken at the ex-job, and I assume they had them when I worked there). 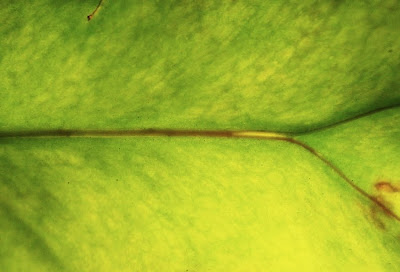 Polypodium grandiceps. Surprisingly good houseplant for me so far, though if the plant dries out too much, any unfurling, immature fronds turn black and die, and that's happened a few times. It's also a little on the big side, though mine's not as big as the Phlebodium aureum 'Mandianum.' At least not yet. 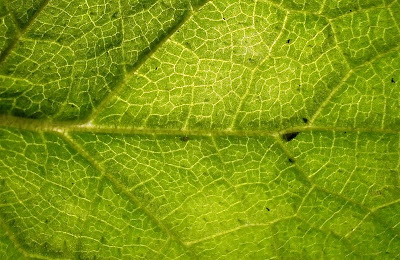 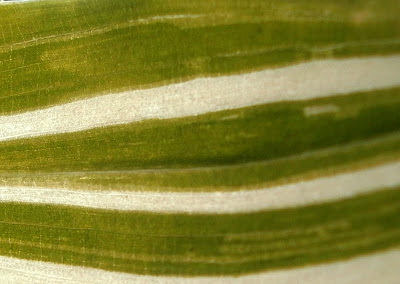 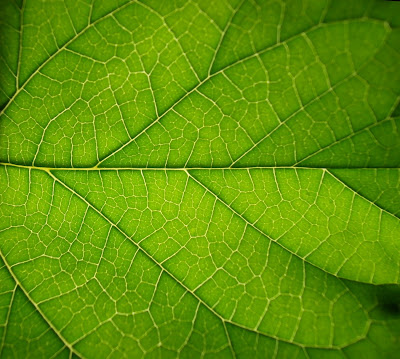 Morus sp. Very happy with the way this one turned out, plain green though it may be. 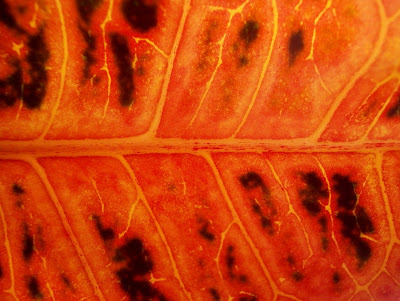 Codiaeum variegatum NOID. Some part of me still feels like croton pictures are cheating. 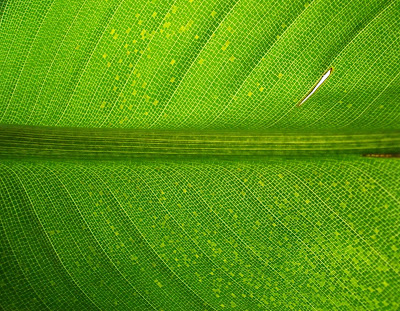 Strelitzia reginae. A particularly fun transmitted light subject. S. nicolai has the same basic structure, but the cross veins are a lot less visible, so it looks more like stripes than like a bunch of little rectangles. Or at least I think that's how it works. 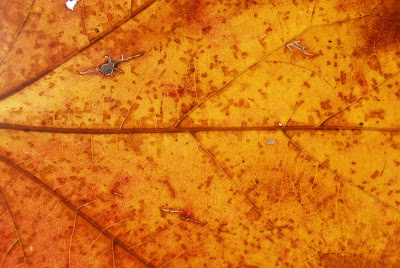 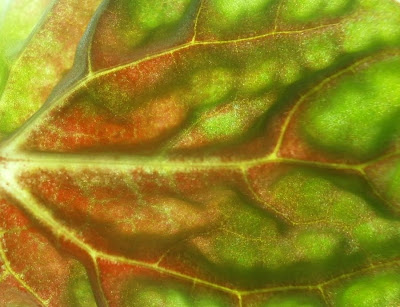 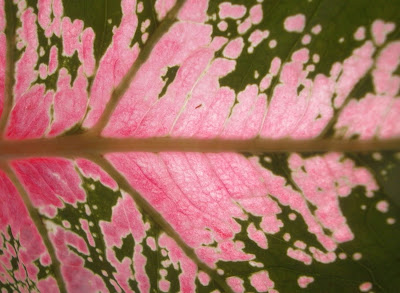 Caladium 'Fire Chief.' Caladiums really suck indoors (at least they always have for me), which is a pity. I would love to be able to grow something like this in the house. Unfortunately, it's too cold in here (year round), and probably also not bright enough. I sort of intended to get some to plant in containers outside this year, but didn't get around to it, or couldn't afford it, or something. Perhaps next year.
Posted by mr_subjunctive at 3:00 AM 5 comments

The one cutting of Breynia disticha 'Roseo-Picta' (also sometimes Breynia nivosa -- as goes Plant List, so goes my nation) that was under lights in the basement, and was producing variegated leaves there, has decided to bloom. 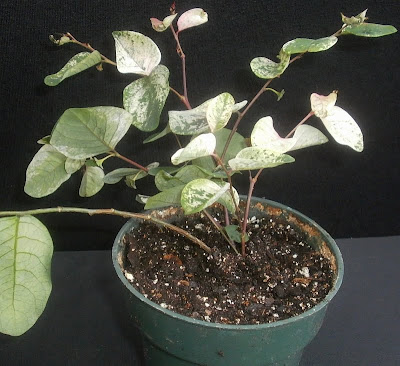 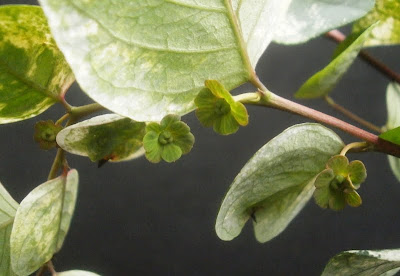 The flowers aren't particularly pretty, but they are weird. I don't know what pollinates them in nature; Google was unhelpful. Does anybody know? 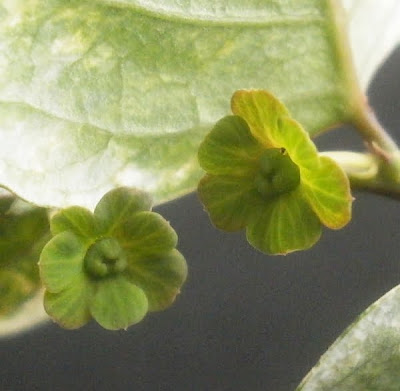 When I got up yesterday morning, Microsoft Updates had downloaded a new update for my computer, which, when installed, caused my computer to deny me access to all of my Excel files. Which are numerous, and important. I spent a couple hours trying to deal with it myself (System Restore didn't help.), followed by an hour and five minutes on the phone with a very nice man from India. He was able to fix everything because the husband had an installation disk for MS Excel 2003: whatever the problem was, it had something to do with MS Office 2002. Had the husband not had the installation disc, I would have been unable to access Excel from this computer forever after, apparently. (The alternative -- spending $130 to buy MS Office 2010 -- was not an option.)

(Computers! Why do we put up with them?)

This ate up the entire morning. The afternoon was spent being Way Too Hot in Iowa City, which was unpleasant (though I did get to see WCW for the first time in months and months, which was cool). Then we came home, put away groceries, got started on watering the 50 plants left to be watered for this particular round of watering, and then the husband noticed Sheba was limping around.

Upon examination, this turned out to be a split toenail. It's not bleeding, and she doesn't actually seem that uncomfortable about it, but of course a little Googling led to anxiety, and anxiety to dithering, and eventually we called an actual veterinary-type source, who said basically that the broken part of the toenail will need to come off, but it's probably not an emergency (which is good, since this happened on a Saturday night, so it's at least 36 hours before the vet will be open) unless Sheba seems particularly distressed about it. She licks the foot a lot, and (understandably) tries to bite us if we attempt to handle the foot at all, but other than those two things, you'd never know anything was going on, so we can probably wait to see the vet on Monday. But still. This took up essentially the whole evening.

By the way: Mercury actually is in retrograde at the moment (explanatory link -- see fn. 1), so if you need an explanation for anything going wrong for the next few weeks, you can use that. You're welcome.