I got some hummingbird photos I was proud of a few days ago and wanted to show them to you. This one was the best: 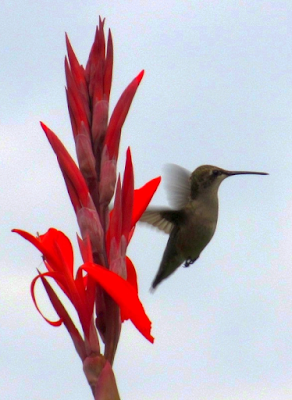 But something about this pleased me too (you may not actually be able to see the bird without enlarging the image):

And this felt particularly Iowan: 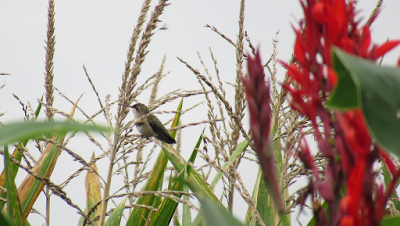 In previous years, I've seen hummingbirds more often than this year, but I think I have an explanation for this now: in previous years, I'm pretty sure they've nested closer to the house, so the Cannas along our fence were the main food source. This year, we outlined the whole property in Canna beds, so there's more nectar available further away from the house than there used to be.

My estimate is that the below crappy photo shows about 60% of this year's Cannas. The tallest ones are about 9 feet / 3 m.

As every year, I spent most of July telling myself, never again so many Cannas, I cannot keep up with the Japanese beetles, it's literally going to kill me, and then come August I'm so happy we have so many and want even more of them next year. The Japanese beetles and hummingbird photos are only going to make that pattern stronger.

Also, while we're here, I got a comment in an old post last May, and mentioned in my response that I'd collected seeds from a burgundy/green-leaved variety of Canna last year, and was growing them out this year. I expected the seedlings would mostly look like the parents, but I've gotten about 50-50 burgundy/green and plain green: 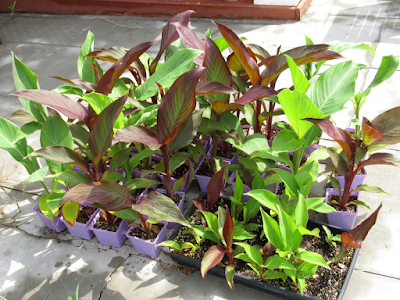 Didn't scarify first, just threw them into the soil, and potted them up as they germinated. That photo is nearly a month old now, but aside from being a bit larger, and somewhat beat-up from getting knocked over all the time by the wind, they look basically the same now.

And finally, I've gotten one Canna from the original red-flower, green-leaf group that might or might not be a sport. Ordinarily the inflorescences are completely red, like so: 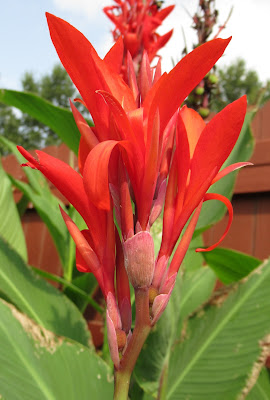 On the weird one, the actual flowers are still solid red, but now there's something yellow: 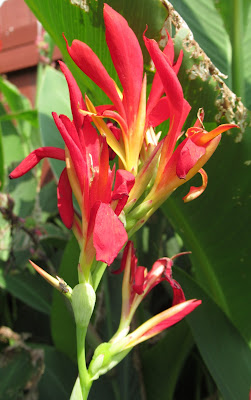 Some investigation led me to this page, which says that what we ordinarily think of as the "petals" on Canna hybrids are actually modified stamens, or staminodia; the actual petals and sepals are tiny. So I think what I have here is a plant that's producing red staminodia and yellow petals; I'm unclear on which things are the sepals but maybe they're yellow too.

So far, I've only seen this on one inflorescence, so I'm waiting to see whether it does it again before I get all excited, but even if it was some kind of screw-up due to environmental conditions, it's still pretty interesting.

That first hummingbird photo is excellent! Personally, I'd have that blown up and framed.

I agree with Paul, and I'm jealous of your photos. There's a hummingbird that visits my black-and-blue salvia, celosia and tithonia flowers every year- but its so small and quick I have never yet got a decent photo of it.