Robyn kind of speaks for herself. Or at least I hope she does, since I had trouble coming up with an interesting way of talking about her. Either way, this is something new: 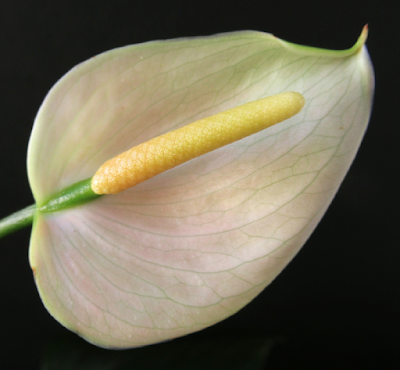 When Robyn started to bud, I was expecting a green spathe, 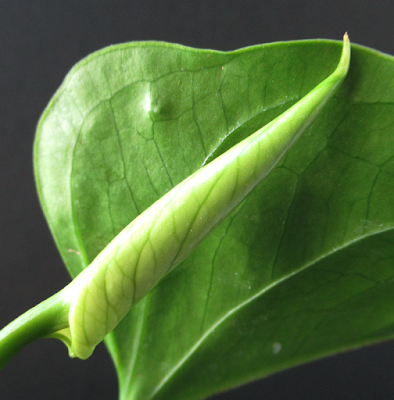 and I was pretty excited about that. Not that green Anthuriums are especially attractive, but I'm interested in just how big of a range of color I can get out of the seedlings, so it's important to check the "green" box at some point.1

But instead, the green lightened as the bloom developed, and by the time the spathe began to open, it looked like this: 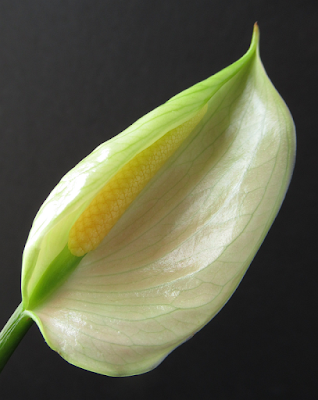 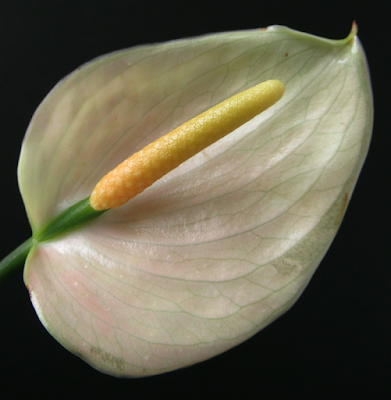 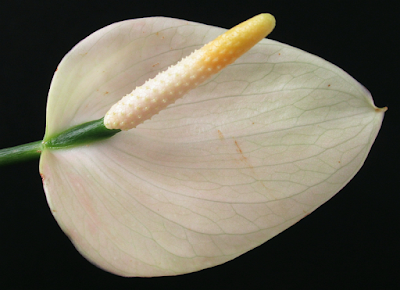 The new camera (I still think of it as "new" even though I've had it for nearly a year) has a lot of trouble with Robyn,2 so these aren't exactly what you'd see in person, but these photos should be enough to get a general idea.

The leaves are fine. A little thrips-scarred, but we've seen worse. 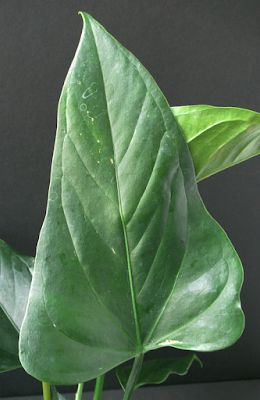 And the plant as a whole has a decent shape. 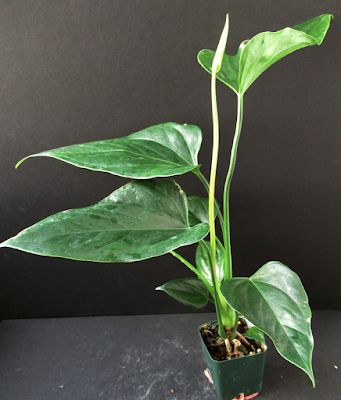 Like 1709 Jinkx Monsoon, Robyn needs to be moved up to a larger pot soon, but I just don't have the space for it. So she waits. Hopefully that will be fine. She seems like a strong seedling. I'm maybe a little disappointed at how infrequent the blooms have been (I think the one in the photos is all I've gotten?), but otherwise she's a keeper.

Oh, and I should also mention that this is the first seedling from 0360 Heidi Gosique to bloom. Heidi was already one of my favorites (lots of blooms; large blooms; huge, flat, interestingly-textured leaves; not a lot of thrips damage -- her only flaw is that she seems to have a bit of a problem with Xanthomonas, though I'm not 100% certain about the diagnosis), but producing offspring like this makes her even more so.


1 Yes, there was 1419 Maya Douglas, who is technically green, but Maya's reluctant to rebloom, and the one inflorescence so far was pretty small. Also not a particularly vivid green, as far as that goes.
I suppose 1103 Valeria T and 1268 Li'l Miss Hot Mess are both close enough to green to be worthy of mention. Valeria is initially a very faint green, which intensifies as the spathe ages; Li'l Miss Hot Mess is white, but has green "ears." Both were seedlings of the pea-soup-green 'Midori.'
Not to spoil the plot or anything, but, although we do get an actual green green eventually, it will come from a parent that isn't green at all. Which was a nice surprise.
2 (Similar to the difficulty it has with getting the color right on 1299 Sinthia D Meanor -- there's something about beiges and browns that the camera just can't handle, no matter how many combinations of the color settings I try.)
Posted by mr_subjunctive at 3:00 AM

Don't know if it is just my monitor or your camera, but looks like it has a faint pink blush to it. Quite nice.