At first, Angelboi doesn't seem like anything terribly special. The spathes are fairly large, I suppose, but it's otherwise just another red/yellow in a very, very long line of red/yellows. How excited can a person get about something like that? 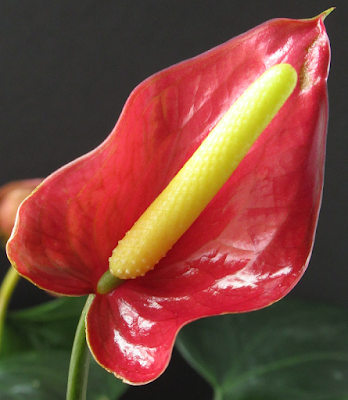 But as the inflorescence ages, he starts looking more special. More textured. 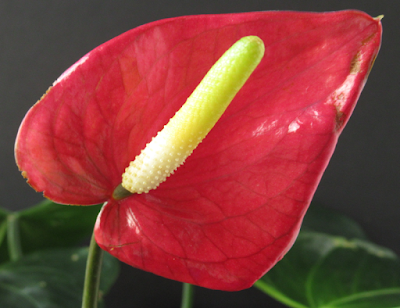 And by the time the true flowers on the spadix have come and gone, the spathe is looking downright weird. It's still red, but now there's a netting of green veins there too. (If anything, this is more vivid in person.1) 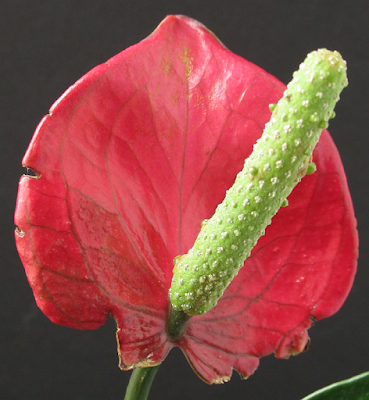 I've seen this sort of thing before, a few times, though usually if there's a striking contrast between the spathe and the veins, it's occurring on the back of the spathe. I won't say that there haven't been any others with contrasting veins on the front, but I can't think of any off the top of my head. Certainly nothing as dramatic as this.

Angelboi also turns out to have nice foliage. Not so much shiny and colorful foliage, 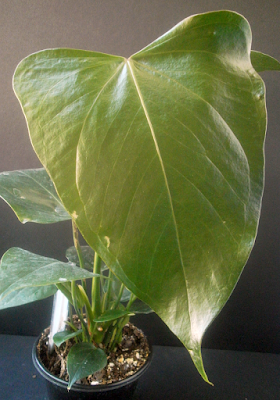 but it's at least large, and mostly unbothered by thrips. (This is more or less in keeping with its seed parent, 0276 Zach Religious, which also has large broad leaves, though Zach's leaves are shinier.) The overall shape of the plant could use a little improvement, I suppose -- since the full-plant photo here 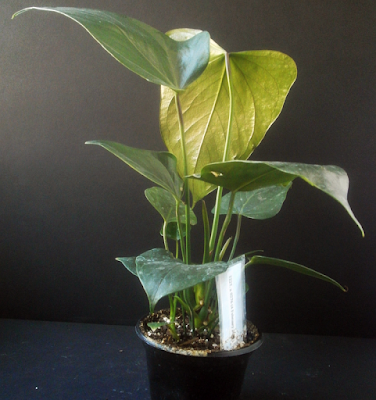 was taken, the distance between leaves on the main stem has increased, so now it's flopping out of the pot a bit. Which isn't ideal. But still: that's at least a respectable number of leaves, and I'm willing to overlook some flaws if the bloom is weird enough. So I'm really happy with this one. 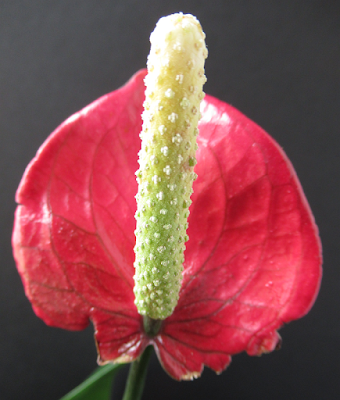 I'm basically out of room now, unfortunately. Have been for a long time. So although Angelboi needs to move up to a larger pot,2 he's going to have to wait. Hopefully he can survive at least that long.


1 I should also note that the bloom from the two first photos is not the same bloom as the one from the third. The one from the third photo had already cracked around the spathe margins when it opened.
2 As do several other seedlings.
I'd like to promote 1171 Chris Of Hur, which has had a consistently inconsistent bloom color since it started to bloom: mostly the spathe starts out pink and ages slowly to orange, but sometimes it goes red to orange, or pink to red to orange. It's weird and interesting and I can't make any sense of it. So naturally I love it.
1213 Miss Foozie has done well for herself too: the spathes are coming a bit more often now, and they're always large and flat and pleasingly-colored. Repotting is less urgent in her case, because she's nearly died of rot once already, and a larger pot would only make that more likely. But still, eventually, she should get a bigger pot.
1268 Lil' Miss Hot Mess continues to produce short, wide, and asymmetrical spathes, and blooms pretty often to boot, so she's at least under consideration for a promotion.
And then there are several seedlings I haven't introduced you to yet that should also be promoted, if only I had the space: 1352 Queen Bee Luscious, 1709 Jinkx Monsoon, 1720 Mado Lamotte, 1731 Robyn Millyonz, and 1733 Jayyvon Monroe. Each of which will get a post to itself eventually. Be patient.
Posted by mr_subjunctive at 3:00 AM