I'd forgive you for not being impressed yourself, but I am occasionally impressed with how many different ways I've managed to come up with to say "ugh, another orange Schlumbergera."

I bring this up, of course, because both of our seedlings today are orange Schlumbergeras. Not necessarily in a bad way, mind you. They're pretty. They're fine. But how can there be SO MANY OF THEM?

Anyway. So first up we have 373A, yet another disappointing non-yellow seedling from the NOID yellow. It's a nice strong orange. Not a heavy bloomer. The name finalists are: Autodidact, Chop Wood Carry Water, Slow-Moving Vehicle, and With Cheese. 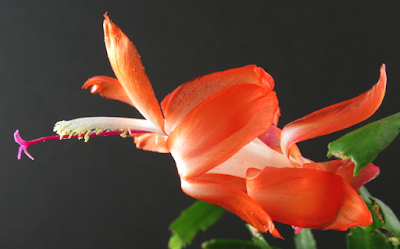 Autodidact, meaning someone who is self-taught, was intended to refer to the color in the sense of, here's a seedling that was trying under its own effort to bloom yellow, and got close, but failed. Doesn't quite work logically, but I like the word anyway, so we can consider it, right?

Chop Wood Carry Water was previously considered for seedling 077C Flickering, and is explained there.

Slow-Moving Vehicle was previously considered for 075A Pushover; it was intended as a reference to the color. In the U.S. and Canada, slow vehicles like horse-drawn buggies or some farm equipment are required to have a bright orange triangular sign mounted on them, to make them more visible to other traffic.

And With Cheese is mostly just a reference to the orange color of some kinds of cheese (usually not the natural color of the cheese, but dyed orange with annatto and/or oleoresin paprika). 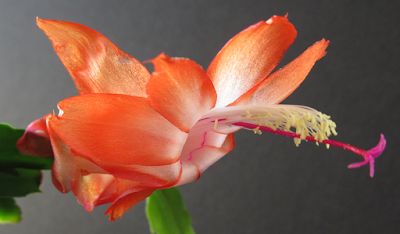 So looking at the options, I'm much less taken with With Cheese than I was when I came up with the list of finalists, so out it goes. And Autodidact possibly requires too much explanation, and/or doesn't really make any sense even if you explain it.


Seedling 418A is perhaps a bit prettier. It at least has a wider range of colors present in it. It doesn't resemble its seed parent (the NOID magenta) either. 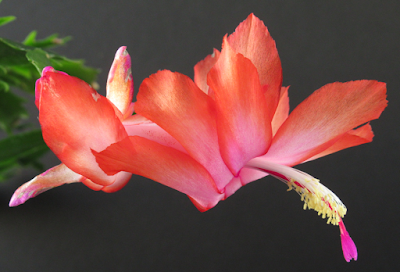 Name finalists: A Few Too Many, Reaffirmed, Saltwater Taffy, and Stunt Double.

Three of the four of those are "ugh, another orange Schlumbergera" in one way or another. There have, arguably, been A Few Too Many orange seedlings; we've Reaffirmed that it's possible to get orange Schlumbergeras, and 418A likely has very little use to me except possibly as a Stunt Double for some older, larger, or more valuable seedling, should one be necessary.

Saltwater Taffy, previously considered for 208A Raspberry Possum and 178A Lulu's Night Off, and sort of considered for 100A Circular Reference, isn't exactly a reference to anything, though sometimes the colors or shapes of the petals do remind me a little bit of saltwater taffy. 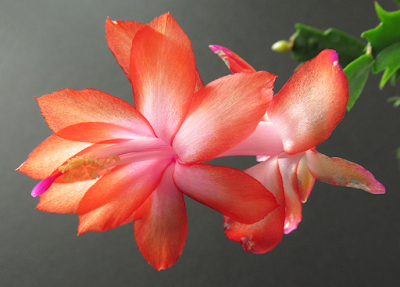 So. I find that Stunt Double isn't really doing much for me at the moment, and although Reaffirmed is accurate, it's also more abstract than our other choices. 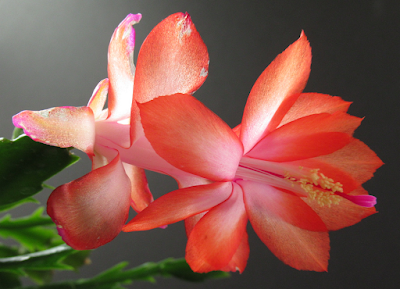