This batch gets better as it progresses. Just so you know.

I somehow failed to get a photo of the foliage for Marie, but it doesn't really matter: I'm pretty sure the foliage wasn't anything remarkable. Neither was the bloom, as far as that goes. I mean, it's nice, I guess, but it isn't anything new. 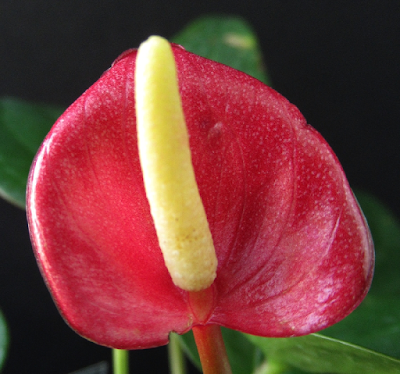 Marie's seed parent was 0126 Erin Dirtylondry (pink / pink), which was similarly nice but nothing new.

Calpernia did that thing they sometimes do where the first bloom is tiny, close to the base of the plant, and unable to open fully. Normally the later blooms are more normal-looking, but in her case there haven't been any later blooms, so this is all we have to go on, and it doesn't look very promising. 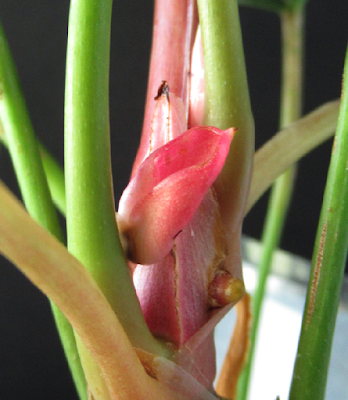 Similarly, the leaves can be okay, sometimes, 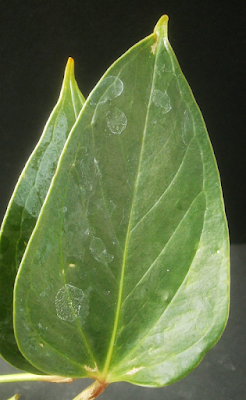 but often they're heavily distorted from damage by thrips. 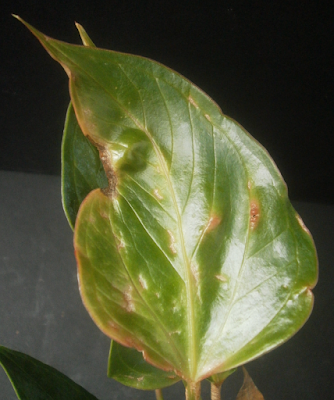 Overall not very promising, and I don't think I'm likely to keep Calpernia around long enough to see if her later blooms are nicer. (Even if they were, Calpernia is the first of 0041 Anna Graham's seedlings to bloom, and Anna was notable mainly for producing large numbers of extremely small and short-lived blooms. So although later blooms would probably be better than this, there's not a lot of room to hope that they'd be a lot better.) 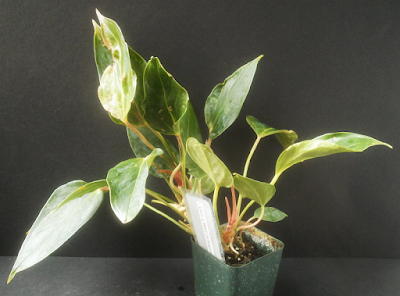 Ida doesn't look all that impressive, 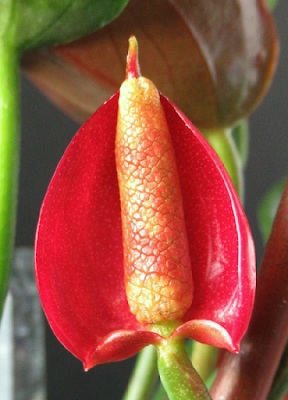 and I wouldn't normally think about keeping her, but I've seen this sort of coloration (the blotchy reddish patches on the spadix) before on plants that produced really nice blooms later on. Also the foliage is slightly unusual: the leaves are longer and narrower than normal, 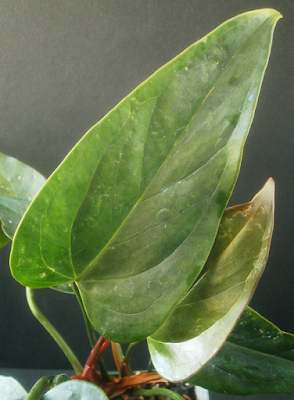 and the new leaves are a surprisingly vivid red. 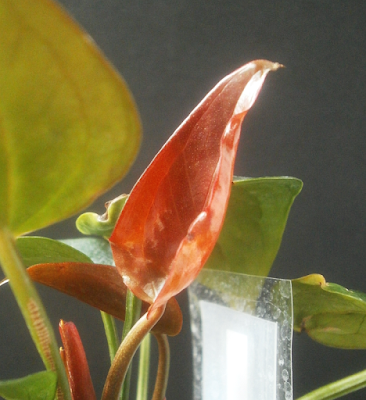 It may not wind up being worthwhile, but I figure there's no harm in waiting a little longer to see what happens, particularly since Ida is the only seedling of 0203 Anna Mae Hemensouz to produce a bloom so far, and I liked Anna Mae quite a bit. 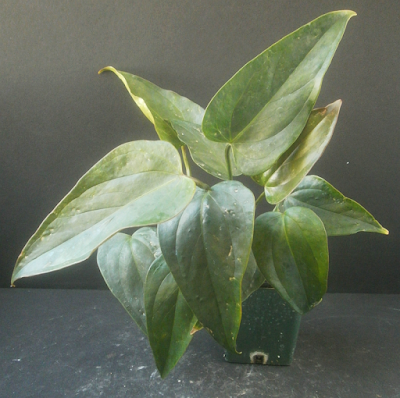 Sister Irma does what she does well, even if it's not anything exciting and new. If nothing else, she seems to handle the thrips problem better than most, both on the bloom 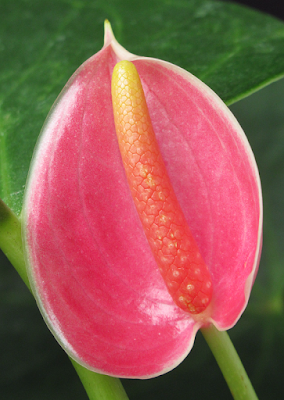 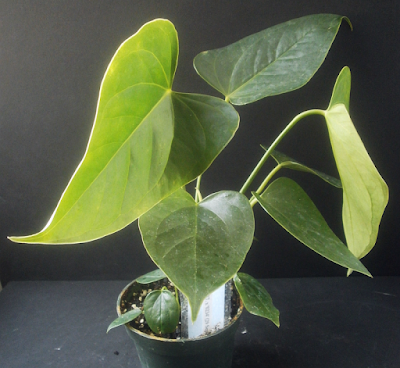 Plus the leaves are individually large; I like seedlings that produce really broad, unblemished leaves. (In this, she maybe takes after her seed parent, 0234 Ross Koz.) 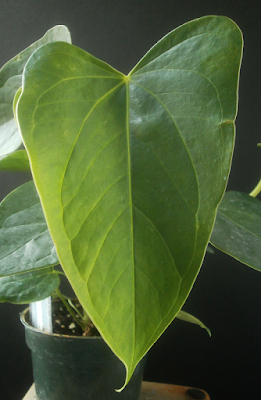 So she may not be ideal, but she's at least not in any danger of being discarded anytime soon. 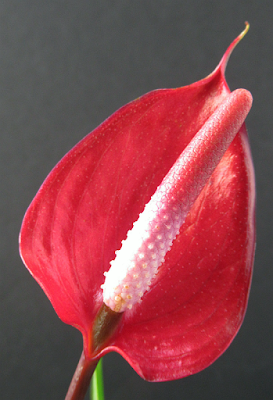 The foliage is somewhat thrips-damaged (or maybe that's Xanthomonas? I can't tell from the photo.), and I prefer shiny leaves to matte leaves, 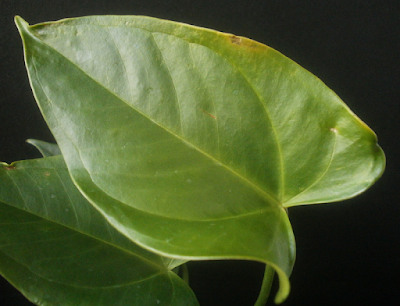 but it's a fairly healthy-looking plant overall, 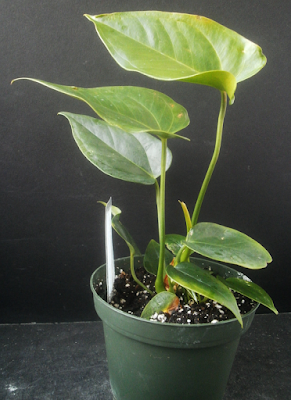 and odds are that the inflorescences would only get larger if I moved the plant up to a larger pot.

Ashley is the offspring of 0282 Dave Trading, and from the same sibling group (EQ) as 1446 Kayla Crawford and 1447 Daesha Richards, who were both also red, though they were less photogenic (or maybe that was the camera?), and had yellow spadices, in contrast to Ashley's red-and-white ones. 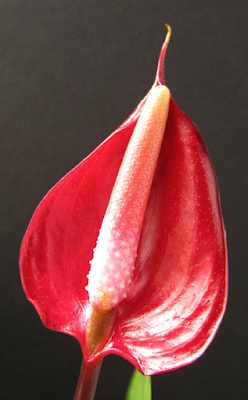 So we'll keep Ashley too. 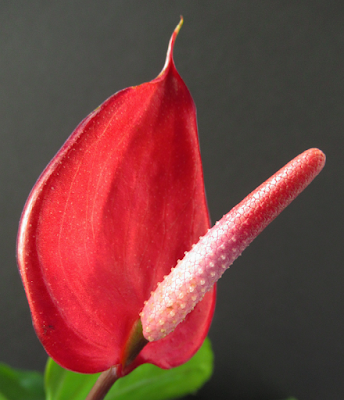 In other news, do you remember when I said that I'd had new first blooms on Schlumbergeras in May, June, and July this year, even though that's not when they're supposed to be blooming at all? Well, as I write this, I've already had two more in the first six days of August: 467A and 147A. Neither is particularly interesting, but their existence is remarkable even if their objective value is not. I have no idea how I'm ever going to get names for them all, much less get names for them all in time for the 2018-19 season to begin.