Lately, an unexpectedly large number of the interesting Anthurium seedlings have come from the cultivar 'Joli,' which I bought in 2014 (as discussed here). This isn't surprising: 'Joli' has unusually complicated inflorescences (new spathes are sort of a pinkish lavender, aging to an orange-red; they also sometimes have green "ears," and frequently the spathes are saddle-shaped, which I hate1), so 'Joli' brings a lot of new characteristics.

'Joli' is not without its problems, as well. The original plant aged poorly, due to long internodal distances,2 so it got floppier and floppier, and tangled itself up in its neighbors a lot, and fell off the shelf entirely from time to time. The spathes also seemed to be unusually prone to cracking at the margins, the lilac color was fairly short-lived, and the inflorescences frequently died before the developing berries reached maturity, making it a frustrating plant to breed with.

Both sets of traits, good and bad, have shown up in some of 'Joli's offspring. 1171 Chris Of Hur, as I mentioned recently, changes color pretty dramatically as the spathes mature. 1271 Boy Child's spathes crack all the time, and often die prematurely. 1325 Dixie D Cupp has the lavender color, which it holds well over time, but the spathes are never pretty, because of marginal cracking and thrips damage, and it also likes to abort blooms before berries have developed. 1352 Queen Bee Luscious (whom you have not yet met) has the green "ears" and the saddle-shaped spathes, plus long internodes and lots of thrips damage.3

The point of presenting all of that is just to say that Kayla fits right into the general pattern of 'Joli' giving with one hand and taking with the other.

The blooms are a nice pinkish-purple; I was getting used to the new camera when the first bloom happened, so the color is a little off on the photos, but it's somewhere between the pink of this picture 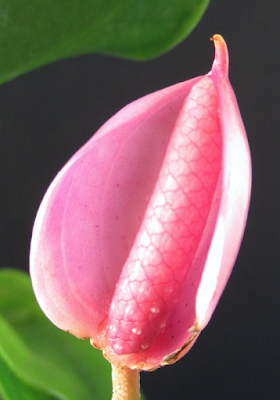 and the purple of this one: 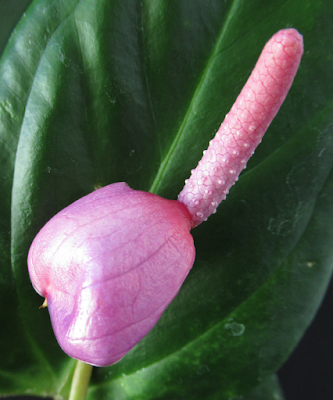 Which is a desirable color, and therefore Good. On the other hand, you'll notice that there are a lot of cracks on the spathe margin here too. And the spathe isn't saddle-shaped, but that's some pretty severe reflexing, which is just as bad as saddle-shaped for my purposes, possibly even worse.

Also the spathes didn't persist long enough to be pollinated and produce berries. So Kayla is interesting, but falls a bit short of being good or useful.

The leaves are okay. Some thrips damage, but not particularly bad. 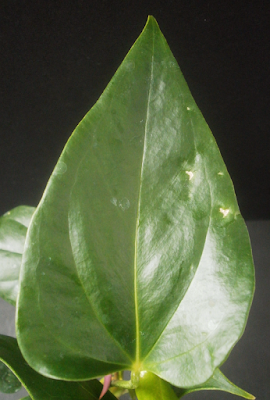 It seems the overall habit is inclined toward long internodes, though I'm not sure that that's going to be a problem yet. Kayla's not quite old enough to tell. Not a reassuring start, though. 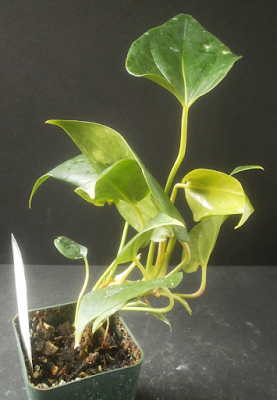 And she's also been very hesitant to bloom. I think it's aborted a few buds, and completed a bloom either once or twice, is all.

So it's exciting to have another purple seedling, but it looks like I may not be able to do anything with it. 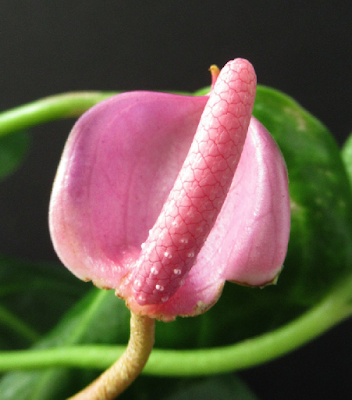 Finally, I want to note that I'm pretty excited about the next post (scheduled for the 17th). You don't have to get excited about it too, but I kind of recommend it.


1 (I hate the saddle-shaped spathes mainly because they are impossible to photograph in a way that keeps them entirely in focus. They're fine just to look at.)
2 (Internodal distance: the distance between nodes. Node: the locations on the main stem where leaves attach.)
3 (Queen Bee Luscious also forgets to produce a spadix at all about half the time, which is annoying.)
Posted by mr_subjunctive at 3:00 AM