Dixie is the second seedling of 'Joli' to bloom, and is the only 'Joli' seedling that actually resembles her parent at all. (At least of the three to bloom so far.) 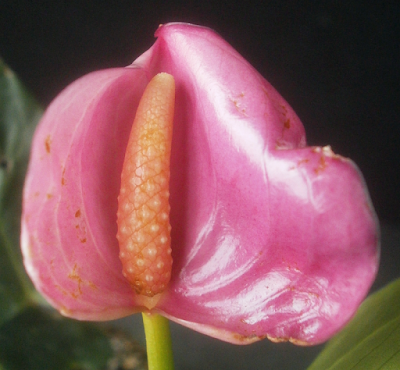 Like 'Joli,' Dixie's blooms are lavender / light orange to begin with, and end pink / pink. 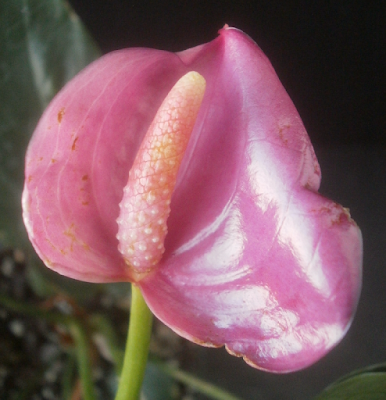 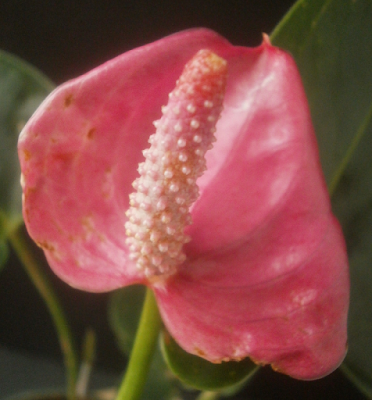 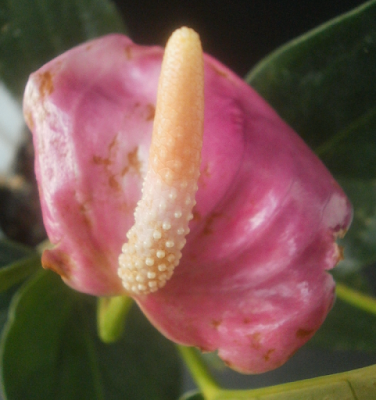 And that includes the leaves. 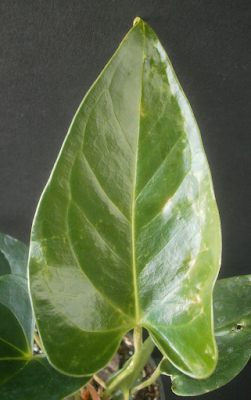 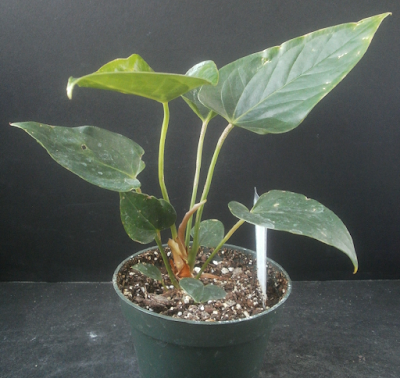 Dixie also has a tendency to begin unfurling a spathe and then give up on it partway through; not only does this not look very nice, but it gives the thrips that much more room in which to hide, and makes them that much harder to remove.

'Joli' eventually became very long and floppy, which was the main reason I discarded it (possible Xanthomonas infection and thrips damage were also factors); it remains to be seen whether Dixie will have the same issue, but . . . given the performance so far, I don't have any reason to doubt that she will.

Which makes the decision about whether to keep Dixie or not a very difficult one. I only have so much room, and any pink/pink or red/yellow that was this scarred and ratty-looking would go in the trash without hesitation, but I only have just so many purple-blooming plants, and it would be nice to have the genes around for breeding purposes even if the plant itself isn't so great.1 For now, the decision is to keep Dixie, I guess, but I don't like her chances of still being here in a couple years.

There was a real Dixie D Cupp, a drag queen from Atlanta, Georgia; I couldn't find much information about her on-line, though. Basically just this memorial page, which identifies her as being active in raising money for causes related to HIV/AIDS; she died in 2010.


1 0105 Deanne T. Christ, 0200 Mario Speedwagon, and 0802 Dana International are actually purple. Deanne and Dana have pretty significant thrips problems, and Mario is very leggy and doesn't produce a lot of blooms.
There are also seedlings that have enough of a purple tint to their pink or red spathes to get me hopeful that their seedlings might be purple: 0231 Rhea Listick, 0234 Ross Koz, 0259 Tasha Salad, 0514 Lauren Ipsum, 0886 Zaria Baudit, and 1249 Celeda.
And then there's a third group which have a purple parent or grandparent and consequently might contain recessive purple genes: 0097 Colin Ambulance, 0108 Deena Sequins, 0758 Miles Long, Esquire, 0771 Nina Flowers, 0789 Marsha P. Johnson, 0791 Joslyn Fox, 0799 Hope Sandreams, and 1181 Tajma Stetson.
Of the three groups, the only one to produce purple offspring was 0200 Mario Speedwagon, the seed parent for 0802 Dana International. None of the children of 0234 Ross Koz have even hinted at purpleness, and the only purple in the descendants of 0108 Deena Sequins is in the spadices: the spathes have all been red or pink-red.
So you can see why hanging on to a purple-blooming seedling might seem like a good idea, even if it's not a great seedling. There might not be any other way to get a decent purple.
Posted by mr_subjunctive at 3:00 AM