And now we're into a short run of seedlings that aren't doing anything very weird, unfortunately. Not that Raven's doing anything particularly badly, 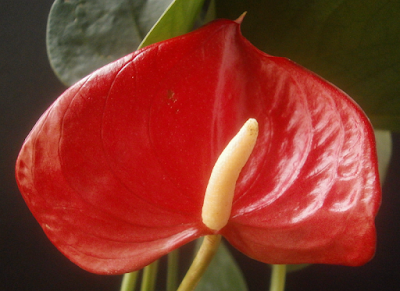 and she's a little weird in that both spathes so far have been very wide and short -- the proportions in the above photo are pretty much what you'd see if you were looking at it in person -- but the color isn't anything new. There's maybe a little bit of green on the lobes, at the bottom of the spathe in the photo, but that's about it. Just a weirdly-proportioned red / yellow.

Raven's the offspring of 0223 Patty Cake, who was also a red / yellow, notable mainly for having very long peduncles.1 Patty's main problem was that she had long internodes;2 Raven doesn't seem to have that problem yet, though it's maybe a little early to tell.

The foliage is distinguished mostly by being very flat -- the secondary veins aren't particularly thick or heavy, and the texture is overall very smooth. 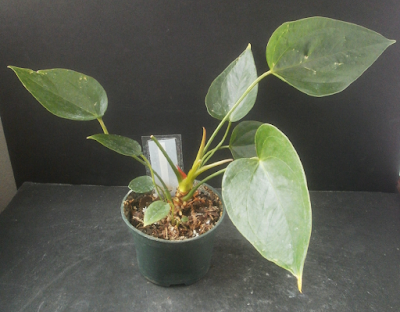 There's some thrips damage. Nothing too terrible. 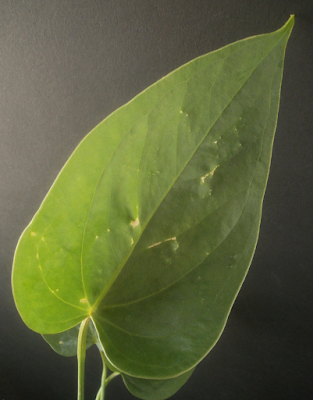 Overall, the spathe proportions are the most interesting thing here, and I'm not sure "interesting" is quite enough, but it's not a disaster, so I'm probably keeping Raven around for a while. We'll see how it goes.

There is a real performer who goes by "Raven Samore Holiday," but I had a really difficult time digging up information about her, so I don't have any to share. Sorry.


1 (the "stem" connecting the inflorescence to the rest of the plant)
2 (internode - the distance between two nodes; nodes are the places on the stem where leaves emerge. Long internodes are a problem because it means that the stem gets long quickly, which means the plant flops over and starts getting viney)
Posted by mr_subjunctive at 3:00 AM