I mentioned at the end of the last post that 0788 was, like, 0728 Sister Dimension, one of the seedlings from 0273 Wes Coast. Wes was a pink/pink without a lot of notable qualities: the most interesting thing about him was that the pink was unusually vivid, in that unphotographable way that seedlings sometimes just glow. (Even then, it didn't happen with every bloom, so I'm not sure what I was actually seeing.) Wes's seedlings, on the other hand, always had two things: huge leaves, and scale. 52 seedlings, of which only 5 have survived (10%); more than half (30 of 52, or 58%) were thrown out due to scale infestation. Not very promising territory in which to be looking for awesome seedlings. And yet: 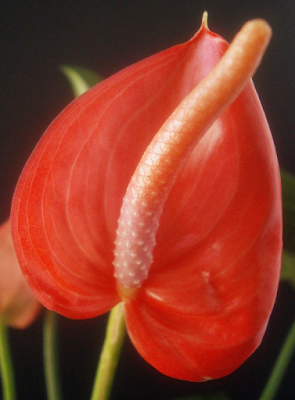 And it's not that we've never seen an orange/orange before; there are several.1 However, Owen is, I think, the first seedling to do both orange/orange and orange/yellow: 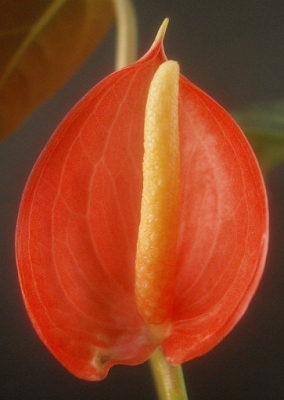 Not sure which he prefers; so far I've only seen one bloom of each. The orange/orange is most recent, so odds are that's the "real" color, if there's a real color.

But that's not even the best part. I mean, I like the orange blooms, but the main story in Owen's case is actually the foliage. Not many individual leaves, 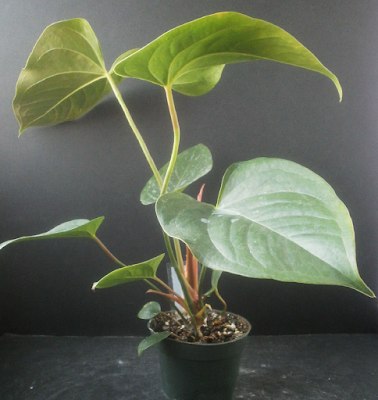 but they're huge, and vary considerably in color as they age. True, they end up at the same boring green as most Anthurium seedlings: 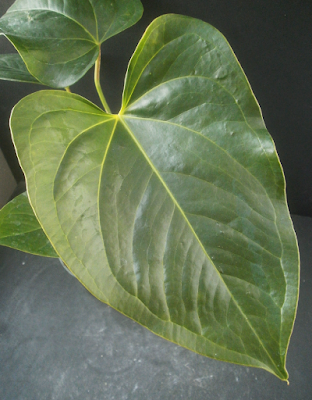 But they get there through a pretty colorful progression, from red through brown and olive: 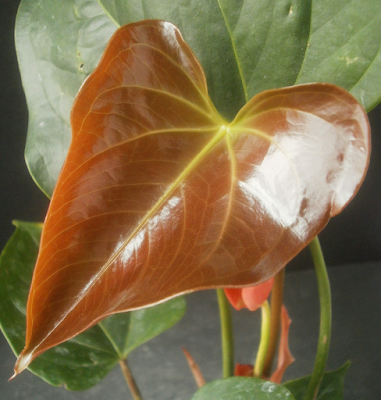 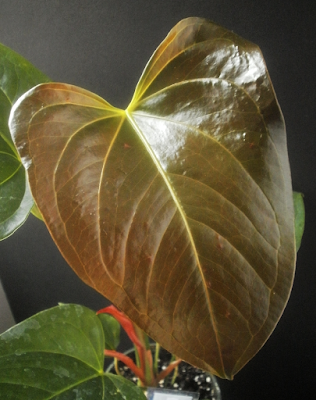 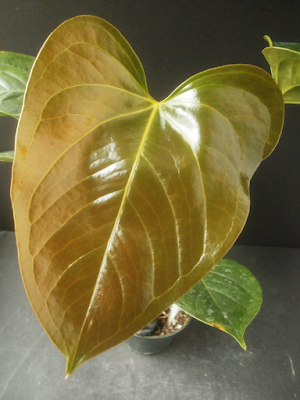 Which is getting pretty hypothetical since so far there's just the one plant and it's in Iowa, but we can still imagine.

In any case. Really happy with Owen. He's developed kind of a sideways lean in the last few months; probably at least some of that's because he's been growing towards light, as plants do.2 Hopefully that will be fixable if/when he's promoted to a 6-inch pot.

Definite keeper, not even a question. The next seedling up is a much more difficult decision.


1 Though mostly they're the same seedling under different names, or close relatives thereof: 0115 Erlene Adopter, 0580 Marsha Marsha Marsha, 0581 Adam All, and 0586 Vera Special are all divisions from the same original plant, all with interchangeable orange/orange blooms and the same peculiar tendency to yellow along the leaf veins; I still don't understand why that happens, or whether it's a bad thing.
Then there's 0120 Eliza Boutisecksis, the half-sibling of the Erlenes, and 1727 Mercedes Sulay, daughter of one of the Erlenes.
Other seedlings sort of lean toward orange/orange blooms, but are too red (e.g. 0116 Eileen Dover), green (0330 Faye Quinette), pink (0813 Arya Reddy), or pale (0317 Dred) for me to consider them fully orange/orange.
2 He has totally adequate overhead light, and no reason to need to move in on another shelf's lighting, but the problem is that his own shelf is pretty crowded, and the adjacent shelf is full of short germination containers that don't obstruct their light at all. So the light looks better to the side, and we get a lean.
Posted by mr_subjunctive at 3:00 AM

Be nice if Owen regularly did the orange with orange/yellow .... rather flame colored.