Inez is surprisingly wonderful. "Wonderful" is, of course, always something of a surprise, but even more surprising is that she's got a white spathe, and I'm not ordinarily that excited about white flowers. But what with 290A Lady Of The Assumption winning Best New Non-Orange and Best New Seedling this year, and now Inez, I'm having to rethink my position on white flowers. Maybe sometimes they're not so bad. 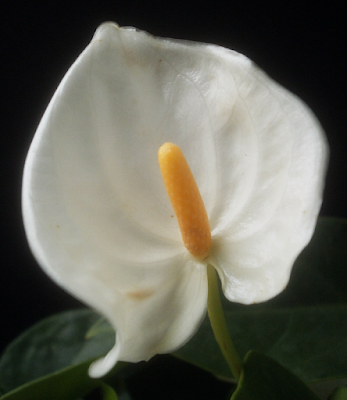 This isn't the first white seedling from the Anthuriums, but it's only the third genuinely white white,1 and it's the first blistered white.2 Which is not that exciting, except that I didn't start out with any blistered whites, and I'm pretty much counting it as a win anytime I get a seedling to do something that the ancestral group didn't do. Which has happened a surprising number of times, now.

Also worth noting that the spathe shape is nice. Or at least interesting. (I think it reads as sort of a bouffant, but maybe that's just me.) 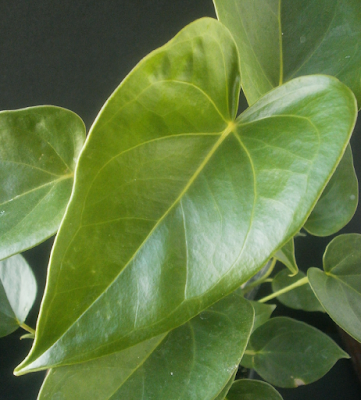 and produces lots of suckers, so the plant is nicely full and robust-looking: 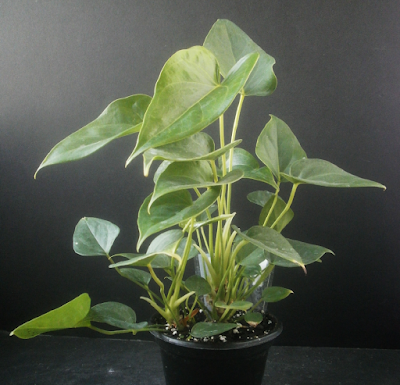 She's even producing a decent number of blooms: I think she's on number three now, and she only started in April.3

There's just one thing not to like about Inez, and unfortunately it's substantial: the thrips. They seem to leave the foliage more or less alone (a nip here and there, but it's not to the point of heavily distorting the foliage or leaving lots of giant ugly scars, like happens with some other seedlings), and don't actually seem to be that big of a problem on the spathes, really, but the spathes are such a pure, snowy white that even the tiniest pinprick of damage is visible.

I mean, there are worse things, and Inez has so many other nice qualities that I don't think it's worth getting hung up about this particular shortcoming. In principle, thrips can be eradicated,4 so in a way, her one problem isn't even that much of a problem.

Next up, we've got another seedling from 0273 Wes Coast (the previous one being 0728 Sister Dimension). Wes was not a great seedling, and most of his offspring were discarded because they were unusually prone to scale, but I've been pretty pleased with the survivors.


1 (After 1095 Carolina Pineforest and 0648 Bianca Del Rio)
2 Though 1268 Li'l Miss Hot Mess might argue the point, I don't count her as white white because the spathes have (so far) all had green "ears," as well as an overall faint greenish cast to the spathe.
3 First bud on 1 March 2017, and then the spathe was open in the first week of April. Inez is either on bloom #3, and they last a normal amount of time for Anthuriums, or she's on bloom #2, and they last an exceptionally long time. Not sure which.
4 I mean, it seems not to work that way in reality, but I know individual thrips can be killed, and it's not a huge logical leap from killing individual thrips to killing all the individual thrips.
5 'Pandola' was unusually variable, for a named cultivar. The spathes were always pretty big, but the spathes ranged from red to pink, and the spadices were orange, yellow, or pink, often all three at different times on the same inflorescence.
Posted by mr_subjunctive at 3:00 AM