The real-life Sweet Pam isn't a drag queen exactly, but she was part of The Cockettes, which Wikipedia defines as "an avant garde psychedelic hippie theater group," formed in 1969. So, like, really really drag-adjacent, I guess. The group was founded by George Edgerly Harris III, who preferred to go by "Hibiscus."1 If you've seen the photograph of a young blond man in a turtleneck putting daisies in the barrels of guns pointed at him, that's Hibiscus.2 Though he wasn't going by Hibiscus then.3

There's an awful lot about The Cockettes out there, and I couldn't read it all,4 but they seem to have been connected to everybody.5 Wikipedia will give you the gist. Sweet Pam (real name Pam Tent) wrote a book about the whole thing in 2004: Midnight at the Palace: My Life as a Fabulous Cockette, which I haven't read and probably won't ever read but is sort of available on Amazon for any readers who might be interested. There was a Cockettes documentary (The Cockettes) in 2002. And if you're up for an emphatically unsafe-for-work6 page, there's this article from 2014, which includes lots of pictures and is pretty interesting. 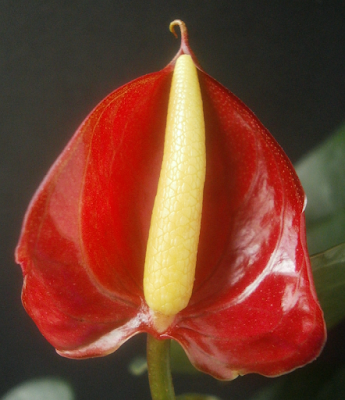 So that's a really quick, sketchy history of the name. Let's move on to the seedling itself.

Sweet Pam is the first seedling from 0223 Patty Cake to bloom. Patty was a pretty ordinary, if large, red / light yellow, and Sweet Pam is significantly better. (This reminds me -- I meant to say, in the post about 0728 Sister Dimension, that she was the first seedling of 0273 Wes Coast to bloom. Sister D. was also a significant improvement on her seed parent; Wes was a pretty boring pink/pink whose main talent was becoming infested by scale.)

It photographed inconsistently, but the veining on Sweet Pam's spathe is very nice -- I think technically the veins are actually dark green, but the contrast with the red is such that they show up as kind of black, becoming more so as the spathe ages. It's not as dramatic in person as I'm making it sound, but it's more dramatic than the photos show, so try to imagine something in between. 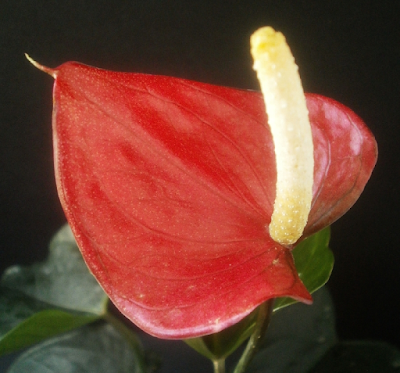 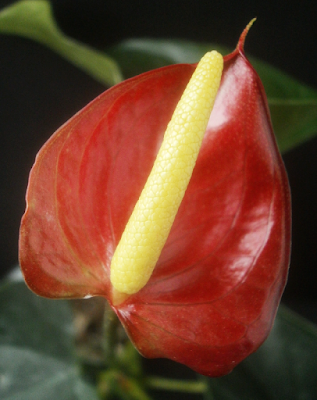 The spathes also last forever. I'm not sure how long because that's not something I keep track of, but I have photographic evidence to confirm at least two months, and I'm pretty sure it's at least three, really. Granted, the spathes have a tendency to warp themselves into odd saddle shapes as they age, too, but that's mostly just bad for photography: they don't look especially bad in person. 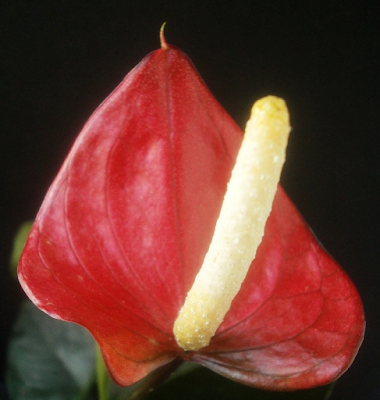 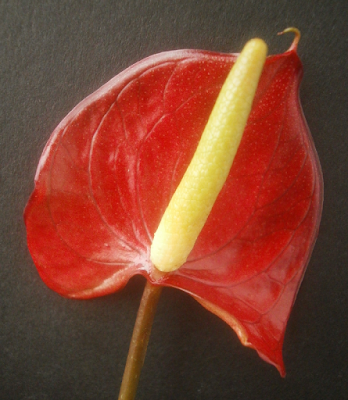 I've somehow failed to get a photo of the whole plant, but you can extrapolate pretty accurately from a leaf: 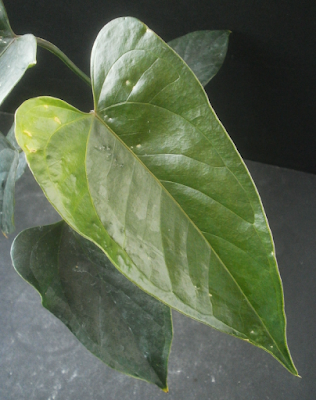 I'm not entirely happy with the internodal length, but the leaves are basically nice. Some thrips damage here and there. Nothing bad enough to outweigh the blooms. So Sweet Pam's a keeper.


1 Which among other things means I can't really give one of the Anthurium seedlings his drag name, and I'm not sure he'd appreciate me naming one of them "George Edgerly Harris III," so I'm not sure what to do with that. Hibiscus is dead -- he was one of the many, many gay men who died of AIDS in the 1980s -- so he wouldn't complain directly, but one does want to be respectful.
2 Or at least we're pretty sure it was Hibiscus. Apparently other people have claimed to be the man in the photo, but as far as I can tell, nobody's made a serious effort to prove their identity.
3 This was, incidentally, the march in which the organizers, Jerry Rubin and Abbie Hoffman, attempted to obtain a permit to 1) perform an exorcism on the Pentagon and 2) levitate the whole building 300 feet into the air. This article suggests that they knew that this wasn't going to happen (obvi) but were looking for something to draw media attention, that although the spectacle was as absurd as you've always heard it was, the participants were at least just as aware that it was absurd as everybody else. (Maybe it's just me, but I'd always gotten the impression from the way people talked about this that those nutty hippies actually believed they were going to levitate the building and were genuinely disappointed when it didn't work out.)
Time magazine apparently reported at the time that although a permit for a 300-foot levitation was rejected, a compromise was reached, and a permit was granted for a levitation of 10 feet (though this article claims only three feet), which if true is a wonderful detail.
The exorcism, or an improvised version thereof, was in fact performed, but it seems pretty clear fifty years later that it didn't take.
4 I may have found more time to read up by the time we get to some of the other Cockettes' namesakes. There will be several: 1265 Inez Paloma is up next, 1262 Reggie will be along in a couple weeks, and 1542 Martin Worman had a bud on it the last time I checked so it might show up this fall. Additionally, 1324 Brent Jensen, 1363 Daniel Ware, and 1422 Rumi Missabu are all still alive; they haven't budded yet, but Anthurium seedlings will try to bud whenever the hell they feel like it, so it's possible there will be more Cockette-related -- and oh my god I only just got the Cockette/coquette connection, you'd think I would be better at catching name puns like that -- more Cockette-related seedlings in the nearish future.
5 Disco singer Sylvester was a Cockette for a time. Likewise drag legend / John Waters muse Divine. Cockette performances were attended by Truman Capote, John Lennon and Yoko Ono, Liza Minelli, Angela Lansbury (!), John Waters (naturally), and others.
6 No, seriously. Really, really not something that would be cool in most workplaces.
Posted by mr_subjunctive at 3:00 AM