Four seedlings to name today, even though I don't like cramming so many together into a single post. Kinda feel like I have to, if I want to get caught up before the 2018-19 Schlumbergeras get going.

Seedling 010B is interesting more for what it is than for what it looks like. When the first blooms appeared in pot 010, I wavered on the question of whether there were two distinct plants in the pot or not. The blooms seemed to vary, but they were still close enough to the same color that I wasn't sure.1 Went back and forth on the question for at least a year before deciding that there was only one seedling in the pot. That decision that lasted for a few years, until this year, when I became convinced that there were two after all. In both seedlings, the "tube" is pink, but one seedling's petals are a bright yellowish-orange, 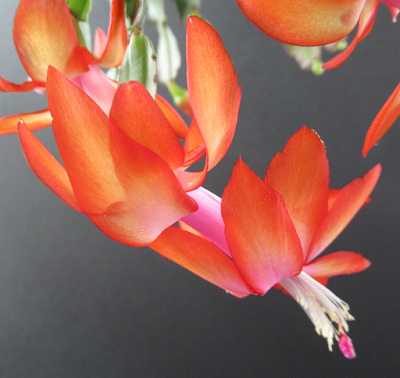 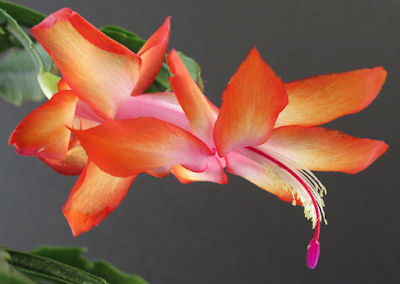 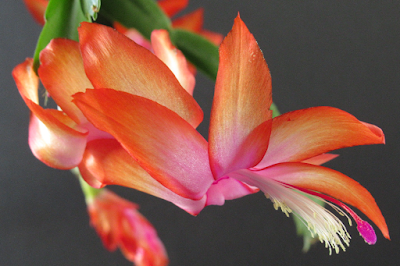 and the others are pinkish-orange. 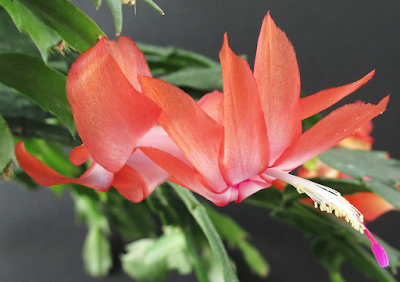 And this is consistent enough that I can look at all the photos I've taken over the years and confidently sort most of them into yellow-orange and pink-orange piles. So the yellow-orange one gets the original name, 010A Semantic Satiation, and the pink-orange seedling needs a name of its own. 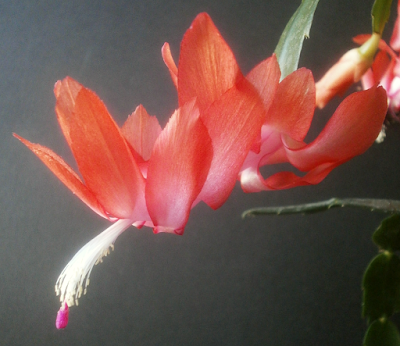 I considered Incognito (because it went undetected for a long time), Memetic Hazard (because trying to decide whether it was one seedling or two was making me question whether I was going insane),2 and Unreliable Memory (because until it produced two clearly-different blooms at the same time, I was never sure whether or not my memory of past blooms was faulty), but have decided to name 010B Sure Jan, after the skeptical meme.

Or, well, not after the meme -- I liked The Brady Bunch Movie before the internet discovered it3 -- but after the particular moment commemorated by the meme. Technically there should be a comma between "sure" and "Jan," but for various reasons, punctuation in cultivar names is a bad idea.4 So in twenty years it will sound like I'm commemorating a Jan who is particularly certain about something. And, in fact, in the movie Marcia is correct to be skeptical, so the implication is that there is only one seedling after all. But I like the name enough to live with the future misinterpretations. 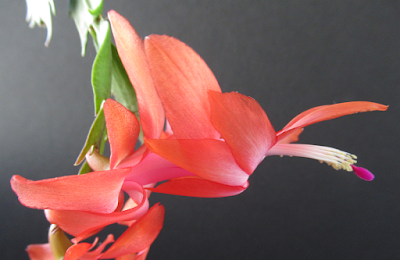 By the time I took a photo of 142A's flower, it was already dying, so there's only one picture, and it's bad: 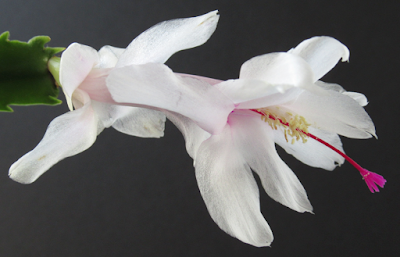 Considered names: Full Reverse, Gimme A Second, Lot's Wife (ref.), and Mashed Potato. Decided on 142A Gimme A Second, because you can think of it as the flower in the photo requesting time to get itself together, or me telling the flower to wait until I can take a picture of it.

118A is another white seedling from the NOID white, but it photographed better: 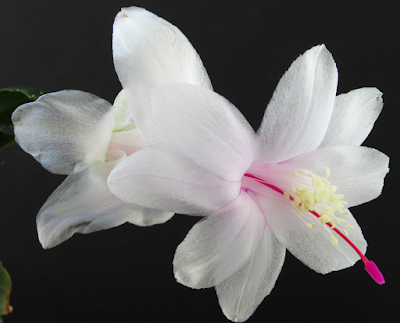 Name finalists for 118A were: Invisibility Spell, Milky Quartz, Polar Bear, Virginia Hall. Milky Quartz (quartz rendered white by the inclusion of microscopic pockets of gas and/or liquid) and Polar Bear (Ursus maritimus) are obvious enough: they're both white, the flower's white, it makes sense. I'm not actually sure why Invisibility Spell is here; my best guess is that this was a case of not noticing that the seedling was blooming until the flower was already open.

And Virginia Hall was an American spy in World War II: she was apparently really good at it, but I find her appealing mainly because she had an artificial foot, the result of a hunting accident, and she named the foot "Cuthbert." Which is weird enough to be terribly endearing. If you're me.

Better still: not everyone knew about Cuthbert. According to Wikipedia, Hall had to escape France in 1942, and just before escaping, she signaled the British spy organization for which she worked, including an offhand comment about hoping that Cuthbert didn't give her trouble on the way to Spain. The official response she received was "If Cuthbert troublesome, eliminate him."

Which, come on, that's fucking hilarious. 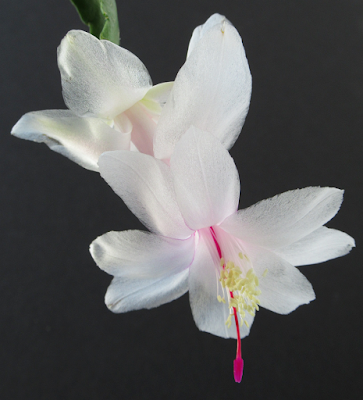 As much as I like Virginia Hall, I'm feeling like 118A Milky Quartz is the better name for this seedling. I don't know why; I could probably figure it out if I spent some time thinking about it, but we've got another seedling to go, so let's keep moving. Virginia Hall may or may not come back for a later seedling: the main point of bringing her up was to tell you about Cuthbert.

Finally, the best seedling of this bunch, 141A, which is just a winner all the way around. It bloomed a lot despite being in the basement, the blooms were all a bit larger than normal, it's not a new color but at least it's not plain white, and it actually looks better in person than it does in the photos. So there's some pressure to get this name right. 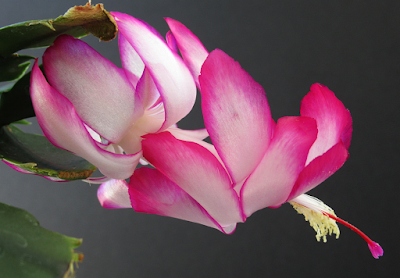 Under consideration: Divoon, Kiss Them For Me, Overdressed, Soujourner Truth.

Divoon and Kiss Them For Me were both previously considered for 182A Padparadscha and 181A Margaret Atwood, for reasons explained in the post for 182A. Divoon was also considered by itself for 132A Pointy Space Princess. Both names are sort of a reference to Jayne Mansfield. 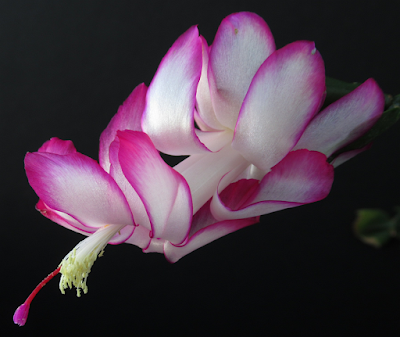 Overdressed is on the list because the flowers' petals seem to be fuller and wider than usual, and lay along the tube in a way that neatly covers it up. This isn't the case in every single photo, but it's how I remember the blooms looking in person. I mean, if you're looking for a name that actually says something about how the flowers look, this is the one to choose.

And then Soujourner Truth is after the historical figure, and would have been the name for 281A No Bad Vibez, were it not for a coin toss. 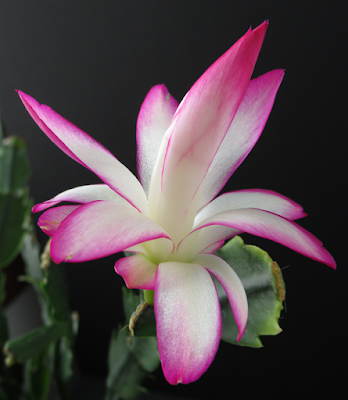 (Even the buds are pretty.)
This was a difficult choice. I figure Divoon and Kiss Them For Me work for any halfway decent magenta or pinkish seedling, and I know we've got more of them this year.5 And will no doubt have even more next year, and the year after. And until I started writing this post, I assumed that the name was going to be Overdressed, because it was unusually appropriate and descriptive: the name and the seedling seemed to fit really well together. 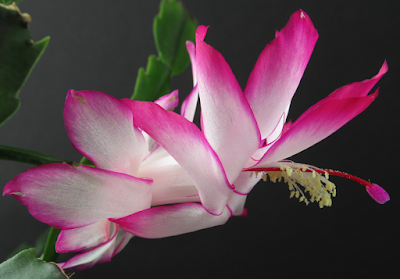 But Sojourner Truth is a pretty amazing human being. And there are only just so many really nice seedlings. And the more seedlings get named, the less often we're going to run into a seedling that does anything interesting. 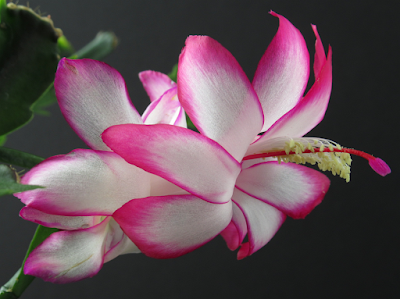 
1 And sometimes the color of blooms changes a little bit as they age: this is less pronounced on the Schlumbergeras than it is on the Anthuriums, but it does happen, especially with the seedlings like 079A Yayoi Kusama and 106A Jaws Of Elmo, whose petals shade from white at the base, through orange, red, and then magenta on the margins. The magenta tends to fade after the first couple days.
2 The name is an SCP Foundation reference: they use the term "memetic hazard" to describe anomalous objects whose effects are primarily mental, e.g. a box, containing nothing, that is nevertheless perceived as containing a dangerous bomb, or a lamp which is perceived as a human male by people who are near it. So "memetic hazard" is more or less readable as "fucks with your head in ways beyond the ability of contemporary science to explain." Which fits the seedling in an exaggerated sort of way.
3 Saw it in the theater in 1995, even. Twice.
4 With commas specifically, the issue is mostly that when you're listing seedlings, it can become ambiguous how many seedlings you're talking about: is "Tantalus, Sure, Jan, and Pyrotechnic" three names or four?
I mean, it's fixable with semicolons ("Tantalus; Sure, Jan; and Pyrotechnic"), kinda, but that looks weird too: when did you last encounter an Oxford Semicolon?
Another problem is that label-makers don't all have the same set of characters, so if you include some esoteric symbol in your variety name, someone, somewhere, is going to have to figure out how to print a gazillion tags using a character that their printer isn't equipped to make. So I've been willing to include exclamation marks for an Anthurium seedling (e.g. 1198 Tabboo!), because I don't necessarily think of the Anthurium seedling names as being the real, official names, but for the Schlumbergera seedlings, I haven't gotten any more punctuationally adventurous than hyphens (018B Fifth-Year Senior; 084A Downward-Facing Dog, 122A Tickly-Benders), periods (167A East Of East St. Louis), and apostrophes (095B Pele's Lipstick, 096A I'm Really Sorry, 178A Lulu's Night Off, 188A Freyja's Turkey, 200A Breakin' The Law, 244A That's My Purse, 379A Can't Find The World). And I don't feel great about the periods and apostrophes.
5 (375A, 380A, 143A, 123A)
Posted by mr_subjunctive at 3:00 AM