Here's another Schlumbergera seedling that only managed to get three name finalists. Unlike 220A Lucille Ball, where one of the names was thrown out, 281A never had four -- I felt like the three I came up with were all strong enough that they would be impossible to choose between as it was, without having to add a fourth. 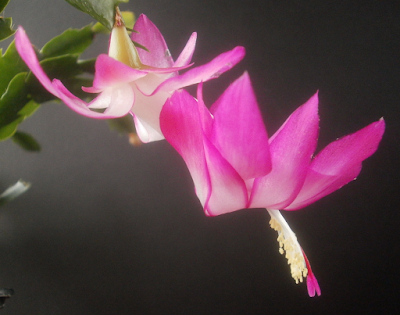 Oh, and I guess I should note for the record that 281A is a sibling of 283A Migaloo; the seed parent was the NOID white, and I feel like there's a pretty strong case to make for the NOID magenta being the pollen parent, because . . . well, just look at it. 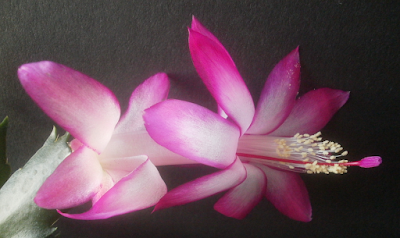 Bite Tongue Deep Breath is, allegedly, what is being repeated in the Clams Casino song "I'm God," previously linked in the post with all the music from a while back. Though because of how indistinct the words are in the mix, some sites say "bite tongue deep breathS" or even "bite down deep breaths." I hear "tongue" and singular "breath," and don't especially care what the actual lyrics are. The point is that I've been saying "bite tongue, deep breath" to myself a lot lately. So why not a seedling name? 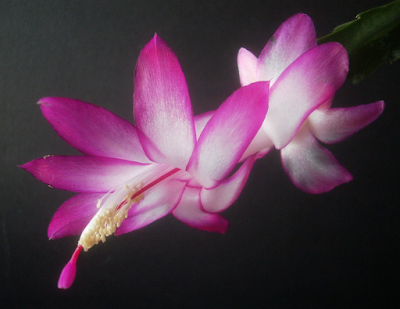 No Bad Vibez is also music-related: it's the title of a Rich White Ladies song which was linked in the 21 January post. It also got a post of its own last July.1 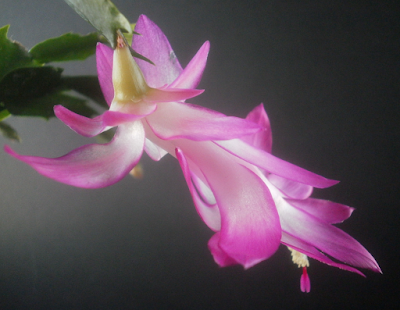 And Soujourner Truth is the historical figure, a name I'd heard a lot without ever being clear on exactly who she was or what she'd done. Part of this may be that her life is difficult to summarize, but this site covers the high points. Wikipedia and www.sojournertruth.com/ go into more detail (though the latter link wanders off into the weeds about halfway down the page, the first half is good). Wikipedia is also interesting on the subject of her most famous speech, known as Ain't I a Woman?.2 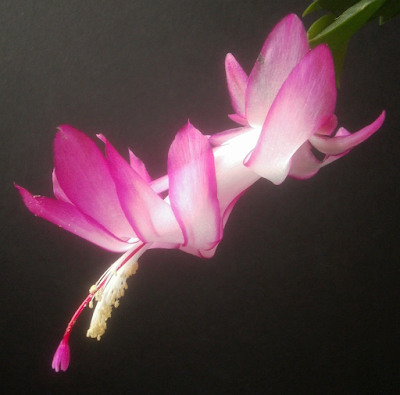 So. Bite Tongue Deep Breath can go first; it's not necessarily bad, but it is long, and it doesn't make a lot of sense out of context, so this is a pretty easy decision. (Sometimes not making sense out of context makes me like a name better, but not in this case.)

The choice between No Bad Vibez and Sojourner Truth, on the other hand, is very difficult. Truth is amazing, seriously, and well worthy of being honored. Which is why she's already got a twelve-foot-tall bronze statue, a library, an interstate, a few paintings, a postage stamp, a rover on the surface of Mars, an asteroid (Truth 249521), and (soon) a $10 bill. Among other things. A Schlumbergera seedling feels tiny and unnecessary in comparison.

No Bad Vibez, on the other hand, isn't inherently worthy of honor -- I do like the song, a lot, but I'm not going to claim that it's one of history's greatest pop songs or anything. It does have an interesting ambiguity of phrasing, though. Is it like "no right turn on red," i.e., "bad vibez are prohibited?" Or is it more like "there are no bad vibez present in this location," like "no GMOs?" The song's clearly talking about prohibition, but if you saw the plant for sale and didn't know about the song, you might read it as absence. And who wouldn't want a plant that's free of negativity?

So which argument is the more compelling one? Which name looks more like the plant before us here? 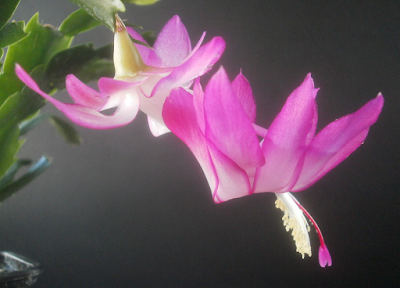 I had to think about this question for several days, and even then, I wasn't able to settle on one or the other. It came down to a literal coin-toss, and No Bad Vibez won. I wasn't unhappy that it won, which I suppose means it's the one I wanted. I imagine we'll be seeing Soujourner Truth again.


1 Well, it had to share with an orchid, Amorphophallus, and politics. But it was the only music video.
2 Interesting mostly for the ways in which it was distorted. The original speech was given in 1851, and although newspapers reported on it at the time, neither provided a full transcription. The first transcription was published about a month after the speech, by someone who was present, and doesn't include the question "Ain't I a woman?"
Then, twelve years after the speech was given, a new version was published by Frances Dana Barker Gage, which has become the canonical version, but Gage also quotes Truth as having a lot of speech mannerisms like those of southern slaves (which Truth had never been; she grew up speaking only Dutch until the age of nine, and was reportedly quite proud of her diction). So we go from the 1851 version, which begins:

I want to say a few words about this matter. I am a woman's rights. [sic] I have as much muscle as any man, and can do as much work as any man. I have plowed and reaped and husked and chopped and mowed, and can any man do more than that?

"Wall, chilern, whar dar is so much racket dar must be somethin' out o' kilter. I tink dat 'twixt de niggers of de Souf and de womin at de Norf, all talkin' 'bout rights, de white men will be in a fix pretty soon. But what's all dis here talkin' 'bout?"

So, I mean, what in the fucking fuck, Frances Dana Barker Gage? Were you even there? (Wikipedia says she was: "[Gage] was an activist in the temperance, anti-slavery, and woman's-rights movements, and in 1851 presided over a woman's-rights convention in Akron, Ohio, where her opening speech introducing Sojourner Truth attracted much attention. Twelve years later, in 1863, Gage recorded her recollection of Truth's speech, 'Ain't I a Woman?.' Gage's version notably differs from 1851 accounts,[6] lengthening the speech, adding the oft-repeated 'ain't I a woman' refrain,[7] and rendering it in a minstrel-like imitation of the speech of Southern slaves - speech patterns which Truth, having grown up in New York speaking Dutch, did not possess." So at this point one can only make a Jim Halpert face at the camera 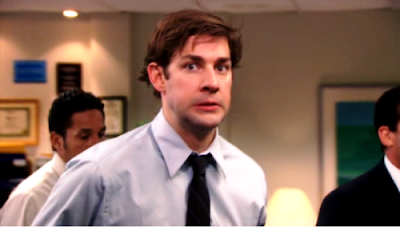 Source: jimhalpertfaces.tumblr.com
and continue.)
The upshot being that, aside from a few points where the accounts overlap, we don't actually know what Sojourner Truth said in Sojourner Truth's most famous and widely-quoted speech. I find this kind of shocking, myself, though I bet Truth wouldn't be surprised.
Posted by mr_subjunctive at 3:00 AM

What a lovely frosty pink Schlumbie. I'd love to see what comes out if she's back-bred to a white. I'm hoping an even frostier pink, hopefully without losing the contrasting edges.

Back-crossing might be a good idea, if I can find a genetically compatible couple. All the seedlings from the NOID white so far have been either white like their mother or magenta like their (presumed) father, which is strange -- I know flower pigment genetics isn't like mixing paint together, and yet I still kind of expected to get a few pinks and lavenders.[1]

It's not like the magenta is a bad color; I was just figuring that, since I've seen a lot of different colors from the 'Caribbean Dancer' x NOID peach cross, other crosses would show similar range.

As far as I can tell, the darker petal margins are genetic; I looked at my photos and the seedlings mostly either have it or they don't. (The exceptions are plausibly cases where there are multiple seedlings in the same pot, and/or camera angles making it difficult to compare photos to one another.) So that's probably good news for fans of dark petal margins.

[1] My guess is that the seedlings I have from the NOID white and NOID magenta so far were not the result of a reciprocal cross. The NOID white's all wound up either white or magenta, but the offspring of the NOID magenta have been red, orange-red, orange, magenta, and white.
I probably tried to pollinate the NOID magenta with multiple seedlings at once, since the parent magenta was still fairly small, and didn't produce a lot of flowers to pollinate. Looks like there was pollen from the NOID white in there, but also probably some from the 'Caribbean Dancer' x NOID peach seedlings, if not 'Caribbean Dancer' itself.