283A was the first seedling to bloom that didn't have 'Caribbean Dancer' as its seed parent; it's from the NOID white instead. I had been envisioning the offspring of the NOID white as a rainbow of pastels, peaches and pinks and lavenders, both in combination with white and one another. This is not how Schlumbergera genetics works, apparently. White --> more white.1 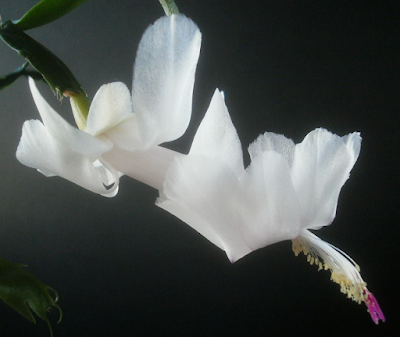 That said, hey, white is a new color for the seedlings, and it's a nicely-formed flower,2 which are both worth something. Not sure what, but something.

The other notable thing about 283A is that it's the only case where the only possible name jumped out at me immediately, which in this case is Migaloo. 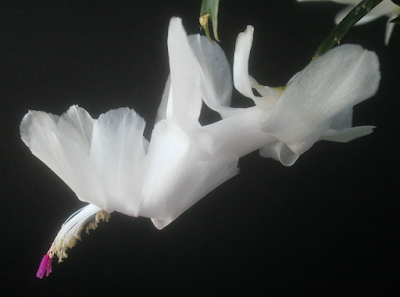 Migaloo is the name given to an albino humpback whale in 1991: a scientist spotted him in Australia, and went to Australian Aboriginal leaders to ask what they would name a male albino humpback, and they came up with "Migaloo," which apparently translates "white fella."3 Migaloo is now pretty famous, as whales go, and has a website, Twitter account, Facebook page, and (maybe) son, though articles disagree on whether or not the son (already named "Migaloo Junior") is in fact actually related, and whether the son is a true albino or not.4

The pictures are pretty cool, especially the (rare) photos of Migaloo breaching. Worth checking out.

I have no memory of finding the name, but I assume it happened when I was looking for Moby-Dick-related names a while back: Moby-Dick --> the titular whale --> white whales in general --> real-life white whales --> Migaloo. 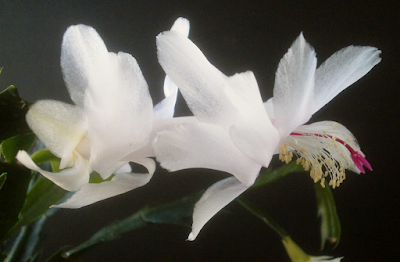 (This is the later, somewhat askew bloom.)
Not sure how I feel about the seedling specifically; I don't especially need another white-blooming Schlumbergera. Especially since you're going to see five more white seedlings before the seedling-naming is done: they don't necessarily all look the same-same -- one is a bit pinker, one's a bit disheveled, one declined to open all the way -- but you wouldn't know they were different seedlings if I didn't tell you. Migaloo is one of the better ones, so if there's a purge-of-duplicates at some point, he'll probably be one of the white ones I keep.


1 Based on other seedlings from the same batch, my guess is that the pollen parent here is the NOID magenta, so white doesn't always lead to more white. Often, but not always.
2 Though a later bloom was a bit wonkier, which you'll see at the end of the post.
3 I sort of feel like they could have worked a little harder at the naming, but whatever. It's a good word, even if the meaning's a little on the nose.
Should also note here that people don't go running to consult Aboriginal tribe leaders the second they see something unusual in the ocean; if I'm reading the articles correctly, he was first spotted in 1991, seen again in 1993, and confirmed as male in 1998. (Only male humpbacks sing, and he was singing.) Which is when they brought in the Aboriginal tribe.
4 (There are also articles disagreeing that Migaloo, Sr., is a true albino. The only thing all the articles agree on is that he's male, he's a humpback, and he's whiter than the typical humpback. Everything else seems to be up for debate.)
Posted by mr_subjunctive at 3:00 AM

If you do wind up purging some of the other whites, I'll take one.

You inspired me to try to grow some from seed and last year I got four tiny babies. This morning I knocked the pot over for the second time in three days, but they seem unharmed. If they ever flower, they're going to be named for you.

Not a bad white. Wonder if a selfing or cross to yet another colored one would reveal a wider palette of colors?