Wait. Seriously, nobody has anything to say about Japanese beetles? [This was true at the time I wrote it, but is no longer true as you read it, now. Sorry for any confusion.-Mr. S.] Would a dramatic visual aid help? 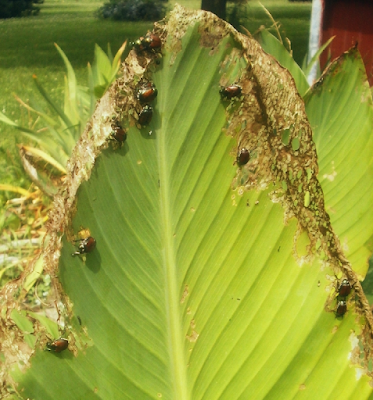 I accept that this is largely my fault -- growing a monoculture of a single clone, planting Cannas in the same bed year after year, being less diligent about picking beetles off leaves than I should have been last year, when these beetles' parents were around, etc. -- but there must be something I can do besides hand-picking beetles off of the plants. In four days, I've removed something like 1000-1500 individual beetles, and yet if I stand outside for five minutes I can watch ten more fly in from somewhere. It feels shitty.2 Tell me how to fix it.

So there's a seedling to name. Specifically, this one: 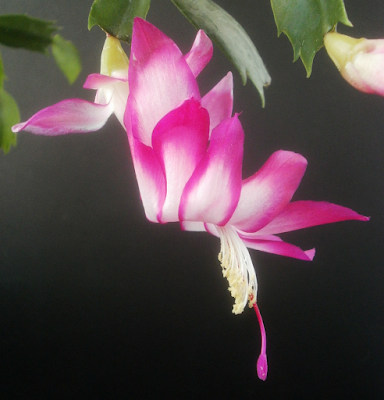 And I didn't come up with four name finalists, because it's the second to last Schlumbergera of the season and I'm tired and also trying to prepare for the 2016-17 Schlummies (scheduled for 19 July). I thought about bringing back Free Kesha3 as a descriptive (rather than imperative) name, because I'm happy for her, and I like her new song, but she's young enough that I can't be sure she won't turn into a terrible person someday. Young people become terrible old people all the time, after all. And I considered Love Is All Around (a.k.a. the theme song for The Mary Tyler Moore Show), but it seemed like that would be tempting a permanent MTM earworm, and I don't think I like the song quite that much. 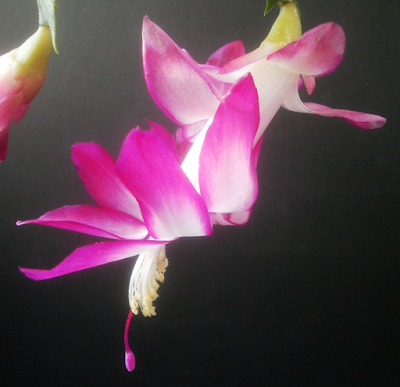 Eventually, I decided to pick one of the names that honor specific people who are/were personally important to me. It happens that this one will also get a song stuck in my head, but I don't think I'll mind nearly as much in this case, because I've become exceptionally attached to the song. The song is Tom Waits' "Time;" the seedling name is East Of East St. Louis. 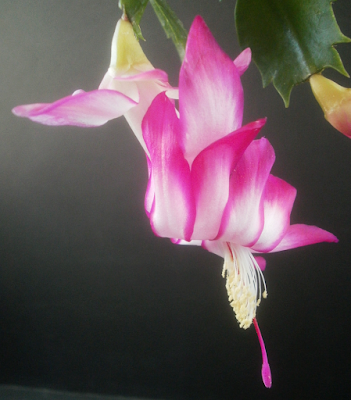 Only one Schlumbergera left, and I think it's going to mirror the first one of the season (283A Migaloo), in that it's also white, and I'm fairly certain that I already have a name picked out. [Aaaaaand this might not be true either; there's a good-sized bud on seedling 142, in the basement, which I didn't notice until Monday night. It's going to be white also. -Mr. S.]


1 That photo is less dramatic than it could be, actually: not only was it taken on the fourth day of Japanese-beetle hunting, which in theory reduces the number of beetles even if it doesn't seem to make a difference in practice, but also it had rained the night before and I think a lot of beetles just hadn't felt brave enough to venture out yet. I've seen more beetles per leaf before, is what I'm saying.
2 All the more so because the Cannas weren't having a good year anyway. They got in the ground late, and then we didn't water during some dry spells when we should have been watering. Sheba's broken a few stems off at the base while chasing after tennis balls. The squirrels have dug up a few, and have taken to chewing the new leaves off before they unfurl: it's unclear what purpose this behavior might serve, but the husband says he's seen it.
I mean, who knows why squirrels do anything, really. I imagine one of the best things about being a squirrel is never having to explain yourself.
3 (previously considered for 211A Bruce Lee)
Posted by mr_subjunctive at 3:00 AM

Fortunately we don't have Japanese Beetles where I live in New Zealand so I can't give you any solid first-hand advice. But from a quick search I've found this helpful article: https://www.extension.umn.edu/garden/insects/find/japanese-beetles/
Looks like it's the perfect time to start applying granular insecticide to your lawn/turf areas with Imidacloprid. All the best!

I've thought about imidacloprid, but there's no way to hit just the Japanese beetles with it, and I don't necessarily want to kill all insect life in the yard.

I'm kind of reluctant in general to use imidacloprid on anything outside at all, for fear of hitting non-target organisms (I figure plants that stay in the house are sort of excluded from the biosphere and therefore are okay), so using it on large areas of the yard is kind of a non-starter unless it's literally the only way. And even then, I'm not sure I could bring myself to do it.