Back in 2015, I was considering the idea that "Amber" was just inherently an unlucky name for Anthurium seedlings, following the disappointing 0558 Amber Waves and 0532 Amber Alert, but apparently when it comes to Ambers, third time's the charm. 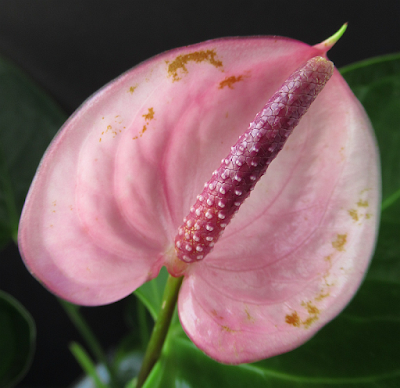 Not that she doesn't have problems. That's quite a bit of thrips damage. And also it's extremely visible thrips damage. But. Purple spathes are uncommon and therefore a big deal, and the foliage is surprisingly nice, considering the spathes -- apparently the leaves are resistant to thrips in ways that the spathes can't be -- and I still like to imagine that a day will come when the thrips are no longer a problem. So she's worth keeping. Or, she's worth keeping for as long as I can maintain the hope of a thripsless future. 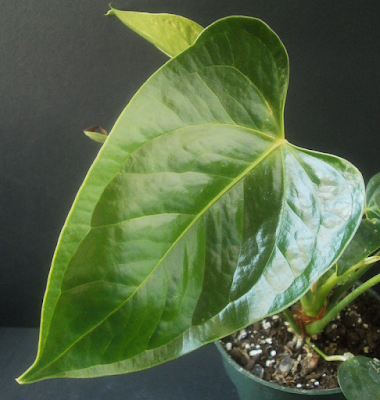 She's filled in a bit in the almost-14-months since the photo was taken, but even back then, there were a fair number of leaves, and the leaves were of good size. 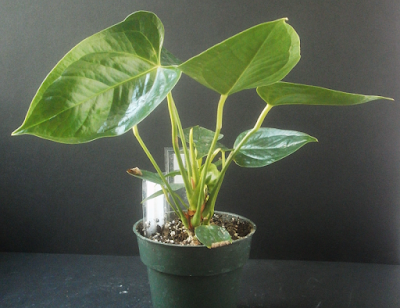 She's since been promoted to a 6-inch pot, which may or may not be why she's blooming more frequently and consistently. (For a while there, she was producing a lot of buds, but then they'd drop before the inflorescence had much of a chance to develop.) 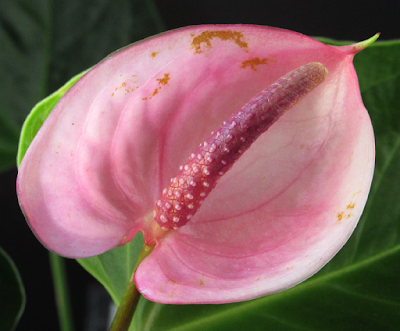 Given the option, my preference would be for a much darker purple, along the lines of 0802 Dana International, but lavender is fine. Whatever shade of purple we can get in the second generation is something to build upon in the third.

Amber's seed parent was 0234 Ross Koz, who has produced a lot of interesting and good seedlings, in a surprisingly large spectrum of colors: 0805 Triana Hill, 0808 Kent C. Forshette, 0811 Alma Children, 0813 Arya Reddy, 1037 Sister Irma Geddon, 1038 Adlai Lowe,1 1158 Joey Arias, 1344 Boeff Stroganoff, 1709 Jinkx Monsoon. Ross is himself kind of leggy, and not much inclined to form suckers, but there are apparently some good genes in there anyway.

We'll see an even more unusual seedling from Ross in about a week.


1 Whose recent blooms have been big improvements on the first one: 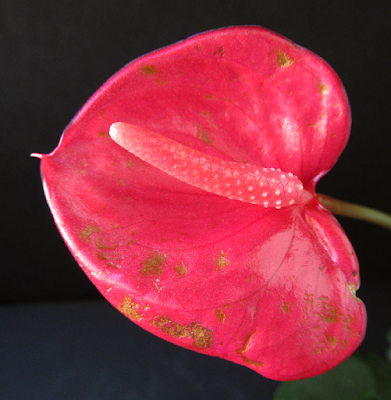 I mean, yeah, that thrips damage is pretty horrific. But if you remember Adlai's first inflorescence, you'll agree that that's a lot better.
Posted by mr_subjunctive at 3:00 AM

Are you considering doing a backcross with Dana to try for darker purple flowers?

I would, but as far as I've seen, neither Dana nor Amber produces pollen. In fact, I'm not sure if any of the plants with purple spathes (0105 Deanne T. Christ, 0200 Mario Speedwagon, 0802 Dana International, 1323 Kayla Stratus, 1325 Dixie D Cupp, 1453 Amber Marie) produce pollen. It's hard to remember for sure; I don't generally make a point of checking for pollen.

There may still be options. I have some seedlings of the original NOID purple around (0097 Colin Ambulance, 0108 Deena Sequins), plus a few of the NOID purple's grand-seedlings (0771 Nina Flowers, 0791 Joslyn Fox, 1767 Constance Waring, 1770 Wanda Hughes-Kissinger, 1771 Art Sifartsi, 1733 Jayyvon Monroe, 1734 Honey Bea Hart, 0758 Miles Long, Esquire, 0789 Marsha P. Johnson, 0799 Hope Sandreams), and the set of plants that aren't really purple but are sort of a purple-red or purple pink, or have red or pink with purple spadices. But I have paltry few plausible purple-pollen parents for propagation.