Another five seedlings today; I really like a couple of them even though they're not doing anything new.

Except for not knowing how to pronounce the name,1 this one is great. The spathes are large and lie more or less flat, and although the spathe color isn't unusual, the spadices are sort of orange when the spathe first opens. Which is a little bit new, though Chanaile's sibling 1224 Perry Watkins appears to have done it first. 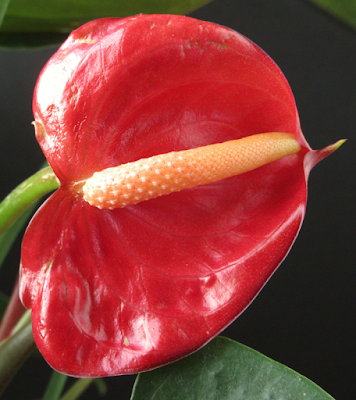 The leaves are okay also. More or less free of thrips damage. I'm not a huge fan of the matte(-ish) texture, but I'm willing to trade a lot of qualities if it gets me thrips resistance. 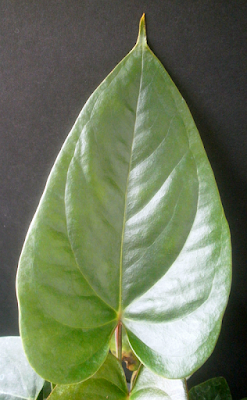 And the new leaves may not be bright red or deep brown like some seedlings, but olive green is still acceptable. 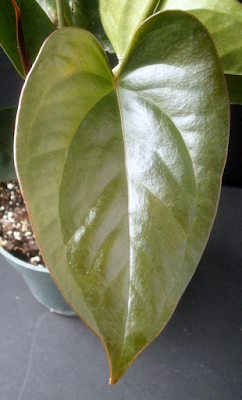 The spathes do have a bit of thrips damage from time to time, but Chanaile is great, taken as a whole. I mean, the orange spadices alone would be interesting; the rest is a bonus. 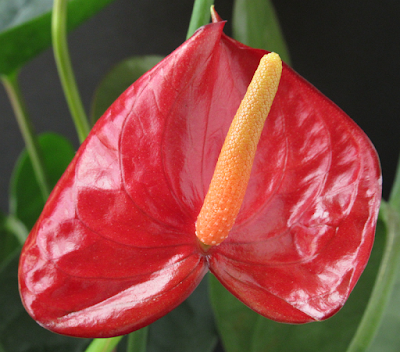 So we're keeping her. 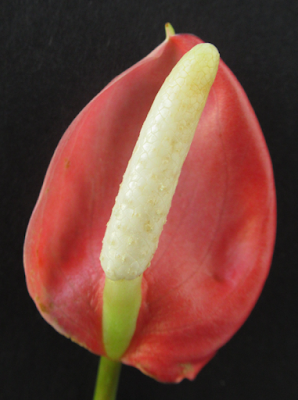 but the spathe flips backwards really severely as it matures, which makes it sort of useless to me. The foliage could be interesting -- it's at least got a very serious texture -- 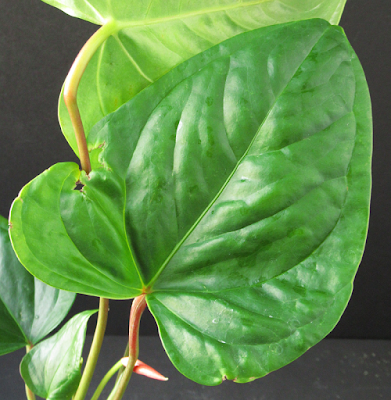 but the plant as a whole isn't doing much for me. 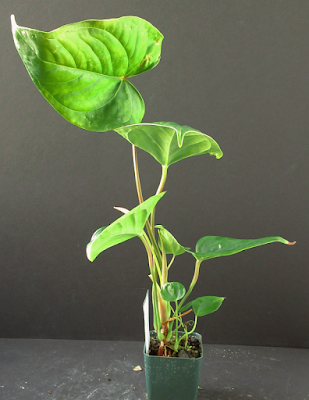 The most interesting thing about Madison is her seed parent: she's the second seedling from 0031 Sylvester to bloom,2 and the first of Sylvester's kids to make orange spathes. Which is something, but it's probably not going to keep her out of the landfill in the long run.

Lady Angelique is another seedling notable more for her origin than anything she's doing on her own: she's another one from 0041 Anna Graham.3 She does have Anna's tendency toward tall, narrow spathes, and I suppose technically they're both pink (though Anna's pink was more interesting), but that's about it. The foliage is kind of distorted; I don't know whether this is from thrips or mechanical damage. 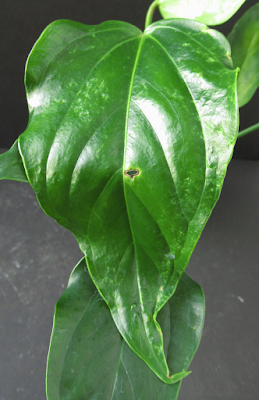 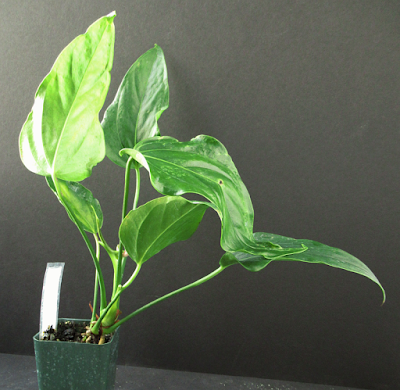 So probably not keeping Lady Angelique around for much longer either. Even if the execution were perfect, she's still just another pink/pink. 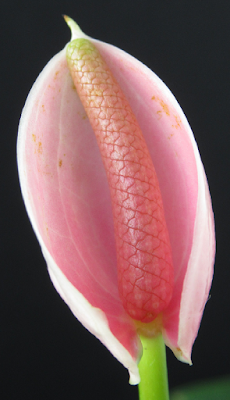 This is, admittedly, a more photogenic pink than Lady Angelique. And while the leaves have some thrips scarring, 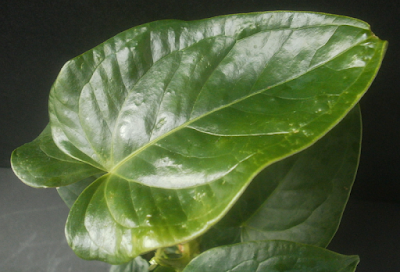 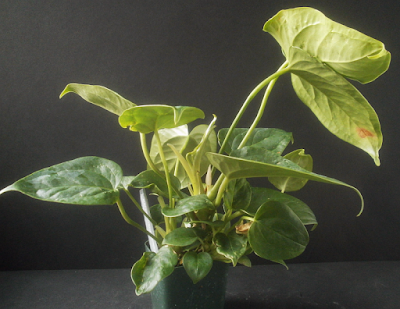 Without the thrips damage, this could be worth keeping around. I think I lean toward waiting to see what the second bloom looks like.

Krystal's seed parent was 0273 Wes Coast, whose offspring I discussed in the post for 1356 Regina Cartier. There, I said that although Wes was pink/pink, none of his surviving seedlings had been pink/pink. And now that isn't true anymore.

Finally, there's Lucy, who is the sibling of 1153 Tintim and 1256 Mr. Completely and is actually really nice: 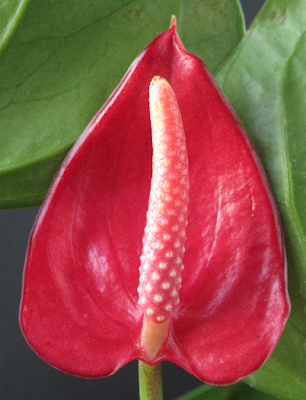 I mean, I suppose "really nice" is debatable. But the color combination pleases me, and the general shape and proportions of the spathe are fine. The leaves and spathes both have some thrips damage, 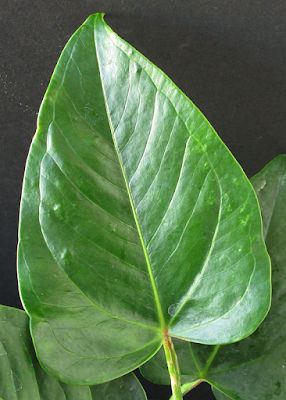 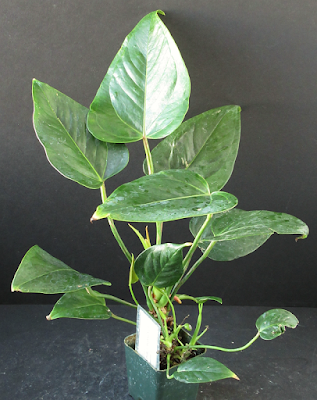 but it photographs reasonably well, and looks better in person. 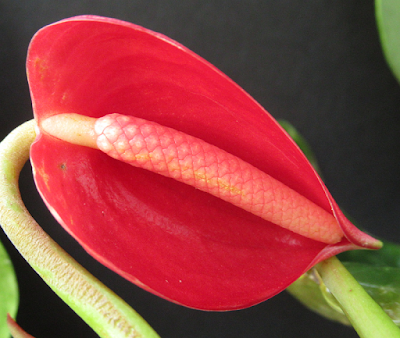 There have been similar color combinations before, but when I went looking through the gallery to see which ones they were, I noticed that most (all?) of them have died or been discarded. So I'm inclined to keep Lucy for the sake of completeness, if nothing else.

I also have some more hummingbirds to show you, and don't feel like making a separate post for them, so I'm going to throw them here.

I already had a hummingbird/corn tassels picture, but this one shows off the green iridescence better: 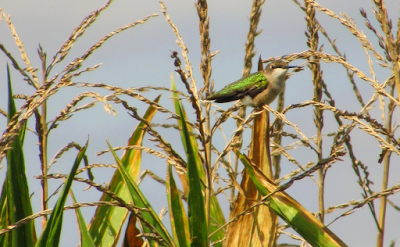 And this was decently in focus so why not: 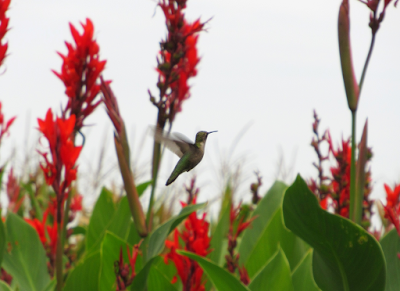 Finally, on 31 August, I went out with Sheba in the morning and noticed that there were multiple hummingbirds. Which hadn't happened before. After the earlier post, I had spent some time reading about ruby-throated hummingbirds on-line, and one of the things that all the sources emphasized was how territorial they were, so I figured I would only ever get to see one at a time. But on Friday, I'm certain that we had three at once, and I'm even pretty sure there were four. They didn't stand still long enough for good multiple-bird pictures -- mostly it looked like there was a dispute about who owned the Cannas, so they spent most of their time chasing one another away -- but I did get blurry evidence of at least two at the same time. 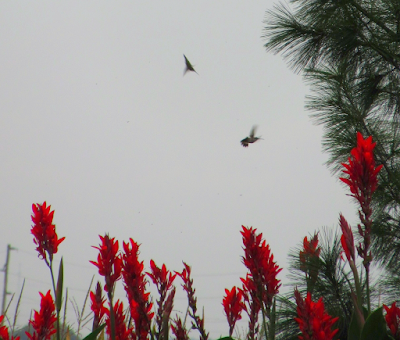 So now I'm obsessed with hummingbirds.

Less photogenic, but -- I've been surprised by the number of bumblebees this year. We've seen them occasionally in previous years, but this year they're all over the place. 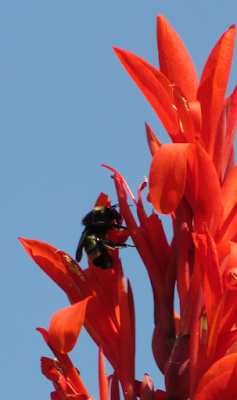 It's surprised me, because I was under the impression that bumblebees barely even recognized red flowers as flowers; I thought they were very particular about blues and purples. I've personally never detected a scent from our Cannas, but maybe there is one? Or maybe I was just misinformed, and bumblebees are happy to take nectar from red flowers? There are lots of species of bumblebee, so maybe the purple-flower thing only applies to some of them. I don't know. In any case, seeing all the bumblebees feels good too.


1 Taken from a real (but deceased) performer; I imagine there is probably a video out there somewhere which includes a pronunciation, but it turns out that I don't actually care that much how to pronounce it since I'm probably never going to have to say the name aloud.
2 (The first was Madison's sibling 1685 Betty Bowers.)
3 (The first being 1317 Calpernia Addams.)
Posted by mr_subjunctive at 3:00 AM