Perry's a pretty good seedling; the most interesting thing to me is the way the spadix changes colors as the inflorescence ages. On first opening, the spadix is orange, 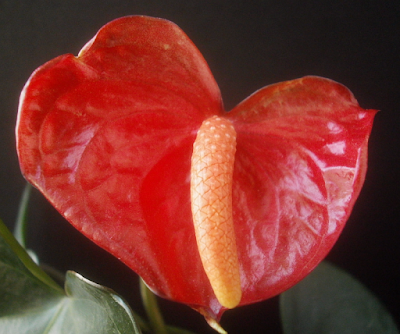 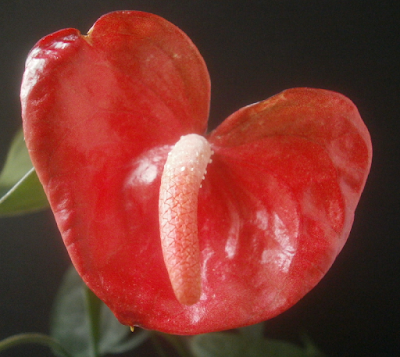 (19 May 2017)
It's not the most dramatic shift, and neither color is unprecedented,1 but red/orange, red/pink, and red/white are all relatively rare combinations, so it's neat to see a seedling do all three. It also looks like it might be an obake bloom,2 and obakes are slightly more interesting to me than solid-colored spathes, so that's a point in its favor as well.

The foliage is pretty good -- longer, larger, and narrower than average, and only slightly thrips-damaged. 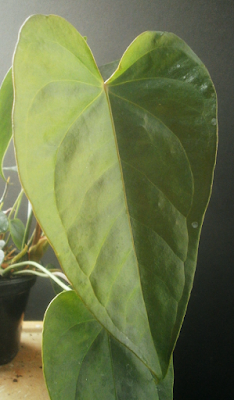 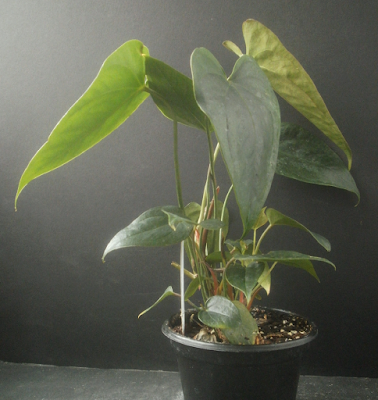 So Perry's a keeper.

The real-life Perry Watkins isn't primarily known for performing in drag, though he did (as "Simone"); he's known for winning a court case against the United States Army, because they revoked his security clearance in 1981 because of his sexual orientation.

This even though they knew his sexual orientation: in 1968 when they drafted him, in 1970 when he reenlisted, in 1972 when they considered removing him from service (but decided against it because they considered his own admission of homosexuality insufficient evidence that he was gay3), in 1974 when they allowed him to enlist again, in 1975 when they considered expelling him (but concluded that he was too good of a soldier to let go), and in 1979 when they allowed him to enlist for a fourth time. And presumably they also knew in 1971 or 1972 when he was performing in drag at shows sponsored by the U.S. Army, first in West Germany and then later in other clubs for enlisted men around Europe. But for some reason, it was suddenly a thing in 1981.

Long story short, the Ninth Circuit Court of Appeals ruled in 1988 that this was bullshit, and the Supreme Court declined to review the case so the Ninth Circuit's decision stood. Watkins had intended to enlist yet again (he was going for 20 years of service, the point at which you get a pension upon retirement) but instead wound up settling with the Army for: $135,000 in back pay (not quite $250,000 in 2017 dollars), full retirement benefits, an honorable discharge from the Army, and a retroactive promotion to sergeant first class.

I've barely scratched the surface of his story; there's more detail in the above links. Watkins is also covered quite a bit in Randy Shilts' book Conduct Unbecoming: Gays and Lesbians in the U.S. Military (1994, St. Martin's Press), according to Wikipedia.

Watkins is also unexpectedly timely these days, as the same logic used to support his case against the Army in Watkins v. United States Army -- that it would be unjust to exclude a soldier who had specifically been encouraged to stay and serve in the army over something the Army already knew about him -- would probably also apply to excluding transgendered military personnel now.5

[NOTE: It's possible I've gotten some things wrong here; I knew literally nothing about Watkins until yesterday afternoon,6 and I've written this in a hurry besides. If you see factual errors, or have particularly good sources of information about Watkins, please let me know.]


1 0842 Pretty Punasti does basically the same thing, though Pretty's spathe is more of a brown-red; Perry's is just red.
2 Obake (Japanese for "ghost" or "change") are Anthurium varieties in which the spathe has one color near the center (white, red, orange, coral, or pink), with green at the spathe tip, "ears," or all the way around the margin. Obakes frequently also produce very large spathes, and are often vertically elongated. You can see several photos of obakes on this page. Production is variable; young plants will often produce solid-colored spathes initially, and begin producing obake spathes on maturity. There's also a seasonal component, with obake spathes more likely to happen in winter and spring.
I'm not sure where the obake trait would be coming from; I had an orange obake ('Florida') for a long time, but it never produced berries, and I never saw any pollen on it either, so I don't think its genes are present in any of my seedlings. I think my NOID pink with large spathes was 'Pandola,' which is an obake, though the photos of 'Pandola' available online don't show a lot of green coloration, just a thin edge of green along the "ears." It's also possible that my NOID red was an obake type, though I don't have photo confirmation of any green coloration on the spathes.
As best as I can remember, none of the first-generation seedlings were obakes; several seedlings in the second generation have a little green along the ears, like 'Pandola.' (Most notably and obviously 1268 Li'l Miss Hot Mess and 1299 Sinthia D Meanor, but also 1209 Raven Samore Holiday, 1213 Miss Foozie, and 1300 Gia Sunflowers. Nothing very striking so far, but the coloration is supposed to develop with age.
3 (!)
4 Wikipedia says he was 47; the New York Times says 48.
5 Twitter proclamations do not, it turns out, have the force of law. Not yet, anyway. So transgendered service members are still part of the military, if maybe slightly more nervous about it than they were a few months ago.
6 His was just one more name in a long list of drag queens somewhere; I almost skipped looking him up.
Posted by mr_subjunctive at 3:00 AM

My favorite type of post - where I learn something new. In this case an amazing story about an amazing man who I had never heard of before (and probably never would have heard about if you hadn't named a plant after him!).