I've been teasing a green flower for a few posts now, and it's finally here. This is Mado: 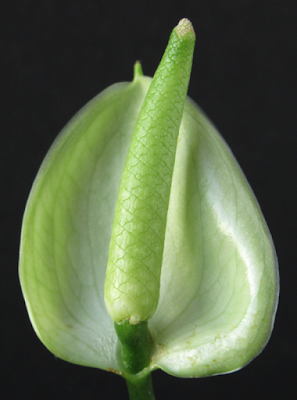 26 November 2017.
Personally I think this is very pretty, though I suppose your feelings about green flowers may vary. Less attractively, the color changes over time, with the spathe getting lighter and lighter and the spadix getting darker and then abruptly changing to white. 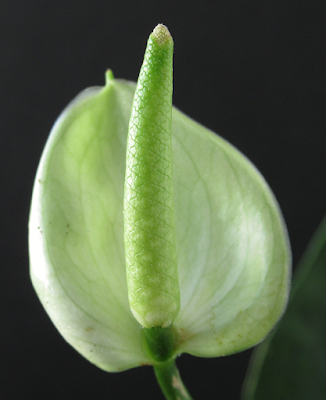 29 November 2017.
This isn't the worst thing in the world, I suppose, and I actually like the spadix changing from light green to dark green to white, but I would have been happier if the spathe had held its color better, or gotten darker with age. 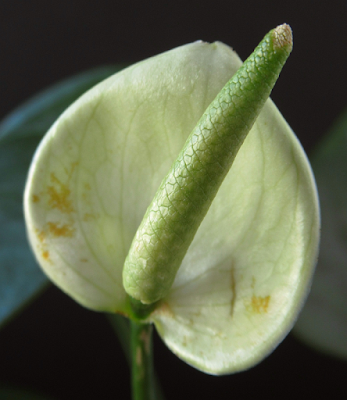 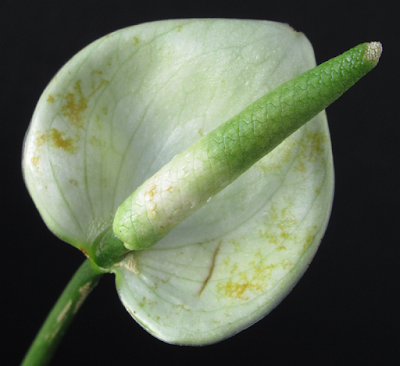 12 December 2017.
But whatever Mado's deficiencies, it's still a green/green. And it's a bit more solid than the previous greenest seedling, 1419 Maya Douglas, from a year ago. Mostly the problem with Maya is that she's only produced one inflorescence, so I don't know what a "normal" Maya Douglas bloom looks like yet.1

Mado hasn't bloomed again either, but it seems like it ought to be only a matter of time: the plant is large and vigorous, and only about two and a half years old, so I'm not worried yet. 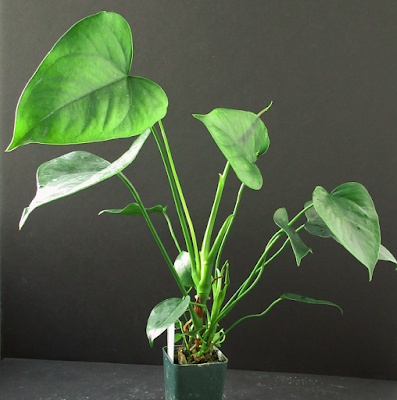 And the leaves, individually, are nice. Not any thrips damage that I can see in the photo. 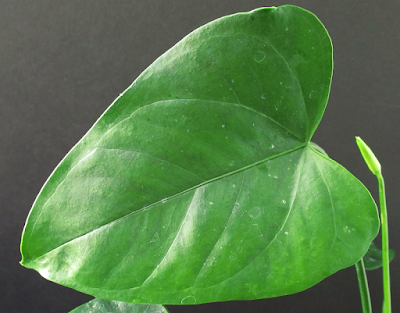 So Mado is a good candidate to get promoted to a 6-inch pot, if and when I can find space for a new group of 6-inch plants. Which may never happen. I don't know. I might wind up discarding some of the existing 6-inch plants, instead of creating new space: a few of them have been annoying me a bit.2

Mado's seed parent was 0234 Ross Koz. Just to refresh your memory, Ross looks like this: 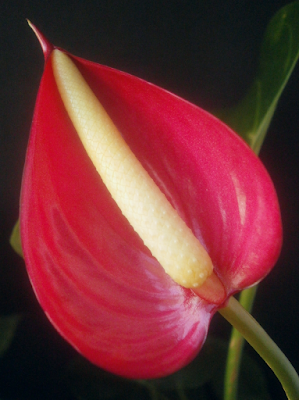 I have no idea what pollen parent could produce green/green offspring from a purple-red / light yellow seed parent. Possibly 0330 Faye Quinette? Faye does make pollen, and there's some green pigment in her spathes. I'm pretty sure I never got pollen from 'Midori,' and in any case I think 'Midori' was already dead by the time Ross would have been pollinated for this seedling. But who knows.

Anyway. Obviously a keeper. Many of the species of Anthurium used for modern hybrids produce green spathes,3 so there's a sense in which it feels like moving backwards to make green blooms on purpose. But I don't care: this one's mine, and I think it's pretty.

The performer Mado Lamotte is from Montreal; I don't know anything about her besides what the Wikipedia article says.


1 I think Maya did produce a second bud several months back. It didn't get very far before being aborted, though.
2 (Looking at you, 0083 Carmen Adairya.)
3
• A. formosum is pale greenish white to pale lavender, with a light yellow spadix that turns white at maturity.
• A. hoffmannii is yellow-green / light yellow.
• A. nymphaeifolium is (green or white) / (yellow or pale purple).
• A. ravenii is light green / white.

The Anthurium-breeding book also includes photos of some hybrids involving other species, specifically A. cerrocampanense, A. garagaranum, A. lentii, and A. caperatum, without ever describing or photographing the species themselves, though the internet came through with some descriptions:
• A. caperatum is pale green / pale green according to this site, though I couldn't find photos.
• The same source says A. cerrocampanense is light green to yellowish green with streaks of dark green or purple, with a green spadix.
• A. garagaranum is an obsolete name for A. trilobum, and has pale green / yellow inflorescences. (A. trilobum also seems like it would be a really good species to use if you were trying to introduce some variation in leaf shape: as the name suggests, the leaves are divided into three lobes. (NOTE: aroid.org still considers A. garagaranum the correct name, so it's possible that it's been changed back, or was never officially changed in the first place. Trilobum does a better job of describing the plant, but garagaranum is much more fun to say and type, so I can't decide which name I want to win.)
• A. lentii's spathe is green tinged with purple (ref.), and the spadix is purple.
Posted by mr_subjunctive at 3:00 AM