The Schlumbergeras in the house are already budding up in anticipation of the 2018-19 season; I still have way too many seedlings to show you before those posts can happen. Though the saving grace could be that most of the seedlings that can produce blooms already have: I haven't potted up any new seedlings or moved any seedlings from the basement to the plant room. So maybe I'll make up for the unusually large number of 2017-18 seedlings by having an unusually small number in 2018-19.

Anyway. Seedling 138A has a bit more pink in it than most of the white blooms do, but otherwise it's what you'd expect from the NOID white seed parent: 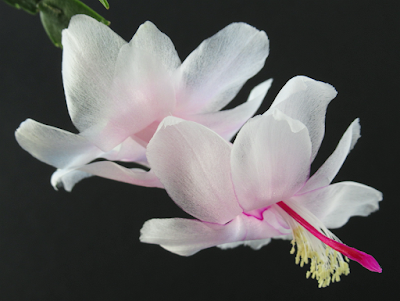 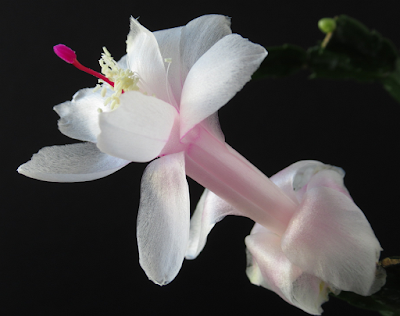 I explained Jellybean Cake (sort of) the last time I considered using it for a seedling, for 044A Iktsuarpok.

Foreshadowing is a glancing reference to the fact that although I had three white/white or white/pink blooms early in the season (044A Iktsuarpok, 122A Tickly-Benders, 136A Khutulun), the 21 new seedlings after Khutulun were red, orange, yellow, and magenta. 138A is the point at which the white ones started to come back. And then I couldn't shut them off.1 It maybe doesn't make sense as a name now, since I'm blogging about the seedlings in non-chronological order. Also there's something sort of perverse about assigning "shadow" to a white seedling, but I suppose that could be overlooked. 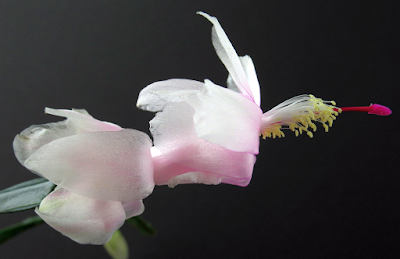 Blind Cave Fish are exactly what they sound like: fish, which live in caves, and are blind. This has happened several times, to different species of fish (e.g. the Mexican tetra, Astyanax mexicanus; Wikipedia has a whole article about cavefish, if you're interested). Given enough time, the species finding themselves in caves tend to lose their pigmentation and eyes, for the straightforward evolutionary reason that if nobody can see your pigments, mutations that wreck your ability to make pigments aren't a liability, and if there's no light to be seen, mutations that prevent normal construction of eyes don't make it any harder for you to eat and reproduce. Though Wikipedia suggests that some species do build eyes anyway, and then cover them with skin.2

Granted, actual cave fish are often not blindingly pure white as the flower, and what color there is tends to be more yellowish or purplish, but one can find pinkish cave fish, so I figure the name is still justified.

I don't remember why Private Conversation seemed appropriate for this seedling when I put it on the list. There's a Lyle Lovett song by that name, which is probably what I was thinking of, but that doesn't actually make it any more understandable. 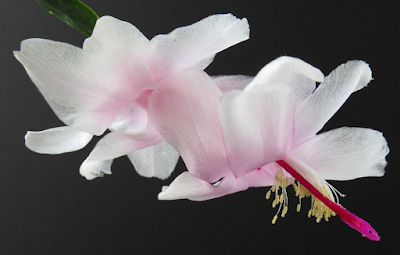 So. Happy to drop Foreshadowing since it no longer makes sense in this context, and although I don't hate Private Conversation, if I don't see how it fits the seedling then I may as well drop it. Which leaves the happy, if sort of extreme, Jellybean Cake on one hand, and the slightly sad and grotesque Blind Cave Fish on the other. And I think I'm going to go with 138A Jellybean Cake. Not because it's happy, but because the flowers sometimes photograph really well, and the color is fairly strong: I feel like a Blind Cave Fish should be a bit duller and uglier.


So now we move on to 380A, which is sort of the opposite of 138A Jellybean Cake: magenta where 138A is white, white where 138A is pink. It was pretty nice the one time it bloomed, 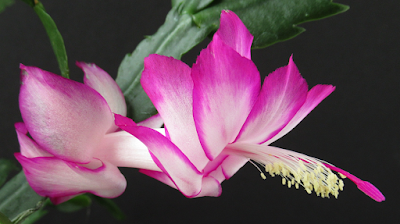 and I'd be pretty pleased with it if not for the fact that the seed parent was the NOID yellow. It could have been so much more interesting. The overwhelming majority of the Schlumbergeras from this year bloomed in a different color than their seed parents. Out of the NOID peach's eight seedlings to bloom for the first time this year, only one (https://plantsarethestrangestpeople.blogspot.com/2018/03/schlumbergera-seedling-no-047.html047A Pluto) was remotely peach/white. The NOID magenta's seedlings produced fifteen new first blooms this year, none of which were magenta/white.

I mean, I understand that pollen makes a contribution. But you'd think the seed parents weren't even involved in the process, except for the NOID white and 025A Clownfish, whose seedlings usually look more or less like their seed parents.

So, our name candidates: It's A Funny Story, Jellybread, Lesley Gore, Magic Words.

It's A Funny Story is a reference to getting magenta from the NOID yellow; the NOID yellow's offspring have inspired a lot of comedy-related names this year.3

Jellybread was considered for 382A Permanganate and is explained there. 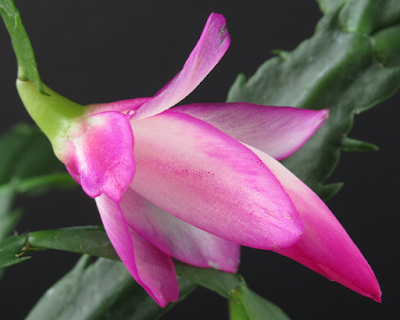 Lesley Gore sang the most famous version of "It's My Party" in 1963, which went to #1 on the pop charts; she also had a #2 hit with "You Don't Own Me," also in 1963. Gore was sixteen and seventeen, respectively, when the two songs were released. Wikipedia says that "It's My Party" even had a sequel ("Judy's Turn to Cry"); I include this because it strikes me as remarkable for songs to have sequels.4 This article at Curve includes some interesting details about Gore's personal life, focusing on her 32-year relationship with jewelry designer Lois Sasson.

Magic Words is one of the names intended to honor someone from my life. 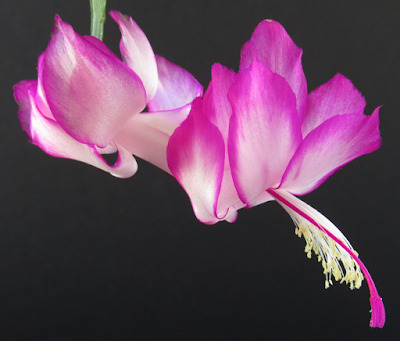 So, first, I guess we can lose It's A Funny Story: it's longer than the other options, and maybe not that clever either. And although I like Jellybread, it's not grabbing me as much as the other two options.

I could probably be happy with either Lesley Gore or Magic Words, but I find myself leaning toward Magic Words for whatever reason. So Leslie Gore will have to come back for another seedling, and this one will be 380A Magic Words.

I didn't expect to wind up with two personal honorific names, but there you go. Another really good Schlumbergera coming up on the 12th.


1 White seedlings to follow: 125A [name TBD], 118A Milky Quartz, 142A Gimme A Second, 155A [name TBD], 137A [name TBD], 406A Flock Of Wolves, 130A [name TBD], 144A [name TBD], 402A [name TBD], 147A [name TBD].
2 Which is also allowed by evolution, of course; it's just a little wasteful. It would be better for the fish not to squander the time and resources making eyes if they're just going to cover them up with skin, but natural selection only requires a species to be good enough to survive and reproduce, not to be perfect. Apparently covering eyes up with skin is good enough, however ridiculous it seems.
3 e.g. 369A Punch Line, It Is To Laugh (considered and rejected for 382A Permanganate, presently under consideration now for 375A), Hi Hungry I'm Dad (coming up in 374A's future post), and Who's On First (being considered for 375A). There will probably be more by the time all the NOID yellow's seedlings are named.
4 Though maybe it shouldn't. I feel like if I tried, I could think of examples of songs that continue the story from an earlier song: maybe it's just that the idea of calling a song a "sequel" is strange to me.
Posted by mr_subjunctive at 3:00 AM