This one's been around for quite a while, as you can tell from the low seedling number, and it's one of the seedlings from the NOID peach, which is still mildly unusual.1 It did manage to produce a fair number of blooms, once it got going, though I think I only got photos of the first one. The blooms are unusual in a couple ways: one, although most of the white-blooming seedlings produce some pink at the base of the petals (what I refer to as "the tube," though there's probably a more precise technical term for it), 044A had consistent, intense pink there. Two, the flowers were a bit smaller than average. At least two other seedlings this year produced unusually little blooms (248A and 272A); I'm unsure why. 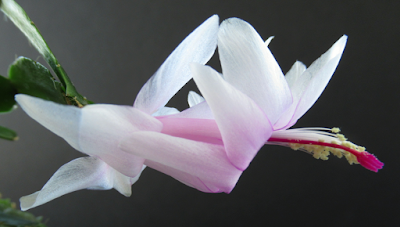 Iktsuarpok is an Inuit word that I found via one of those articles about words with no good English equivalents (specifically this one2). It's the feeling of anticipating someone's arrival to the point of checking and rechecking to see whether or not they've arrived yet.

Ice Castle is a name I've kind of liked for a while,3 that seems suitable for a white seedling.

Jellybean Cake is one of those names that I don't explain because they reference a particular person from my life.

White-Knuckle is the idiom, chosen mostly just because it includes "white," and the seedling is partly white. 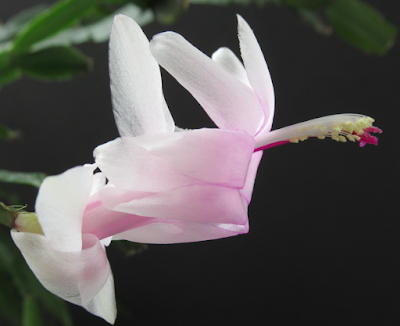 First one to go will be White-Knuckle. It seems especially inappropriate for a seedling with this much pink in it, for one thing; for another, I just know it'll get this song stuck in my head all the time:4


and that would be intolerable.5

And then Ice Castle, too, seems better suited for a pure white flower.

So Iktsuarpok, or Jellybean Cake. Both suit the flower well -- I had been waiting a while to see a bloom from this seedling, and consequently had checked it several times in the past to see whether it was producing buds; the situation referenced in Jellybean Cake involved a jellybean which was either white or pink,6 so a flower that is both colors works either way.

Both are also slightly problematic: Iktsuarpok is awkward to pronounce and type; Jellybean Cake makes me think of a rectangular block of jellybeans mashed together, maybe with frosting on top, which is not what the name is supposed to evoke.7

I'm going to go with Iktsuarpok, because the situation it refers to (checking and rechecking to see whether a seedling has bloomed yet) is more specific and less common than having a bloom that is both white and pink (which has happened with most of the white-blooming seedlings to one degree or another). So: 044A Iksuarpok. I'm sure once I've practiced pronouncing it in my head enough times (ick-tsu-AR-pock? maybe?), it'll seem like a real word.


1 Although I'm fairly certain that the first 114 seedlings were all from a mutual cross of 'Caribbean Dancer' with the NOID peach, they've performed very differently, depending on which seed parent they had. The seedlings from 'Caribbean Dancer' have mostly been pretty robust and quick to bloom; the ones from the NOID peach have grown more slowly, took longer to produce blooms, and seem more prone to producing misshapen stems or flowers or both. This has been less of a problem with the second batch of seedlings from the NOID peach, but they're still often a little weird, as you'll see if and when we get to seedling 143A. I don't have any idea why this would be the case.
2 We may wind up seeing a second word from that list later this year; the Japanese "boketto" (staring vacantly into the distance, without thinking). I feel like English actually does have a concise term for this ("spacing out"), but maybe there are nuances. Who am I to argue with Mental Floss?
Boketto doesn't have any particular connection to the Schlumbergera seedlings, but we're still watching Dynasty, and Krystle Carrington, in particular, still does this a lot, so it's on my mind. And it's a pretty-sounding word.
3 (considered and rejected for seedlings 074B Crone Island, 119A There Would Be Peace, and 290A Our Lady Of Assumption)
4 I had a phase a while back where I was watching a lot of Ok Go videos; "White Knuckles" was easily the worst earworm.
5 Also I've been trying not to assign names that have the bloom color in them: White Knight, Orange Crush, Red Queen, etc. I may eventually have to break the rule, but I don't have to yet.
6 It was a long time ago, and I can't remember; if forced to guess, I'd guess white.
7 The mental process being that a "jellybean cake" is a cake made of compressed jellybeans, in the same way that a "fruitcake" is a cake made of compressed dried fruit. The actual moment being referenced involved a perfectly normal piece of sheet cake, with green frosting, which had a single jellybean on top.
Posted by mr_subjunctive at 3:00 AM