Yet again: one bloom, one photo.

Also: not entirely sure that this is a separate seedling from 062A Open World. It looks pretty different, but when I check all the photos I've gotten from pot 062, there are some flowers with colors intermediate between 062A and 062B. The one in this post is substantially different from the average bloom, but I don't know if it's actually a separate seedling. So whatever name I come up with here might have to be dropped and recycled at some point in the future.

It's really striking, at least, whether it's new and awesome or old and variable: 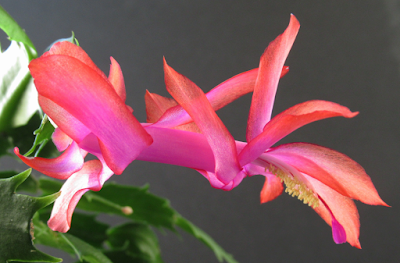 Charo has previously been considered for seedling 066B Sigrid the Haughty; that was totally the correct decision, since I think Sigrid the Haughty is my favorite name of all the seedlings ever.1 But it would make me sad if the world forgot about Charo, so I'd like to do my part to prevent that, sooner or later.

There's more to Pure Energy than it appears; it's one of the names intended to honor someone from my life. Previously considered for 011A Annie Lennox, and rejected because, based on image searches, it seems most people associate "pure energy" with blues and purples, plus Annie Lennox is just cool.2 But this is certainly a very energetic-looking flower, and the magenta may be as close as I'm going to get to purple. So maybe.

Underestimated is just a reference to the fact that I hadn't thought 062A Open World was that impressive -- it was fine, but nothing we haven't seen before -- and now 062B is really striking.

So okay. Drop Underestimated; it's not wrong, but it's abstract and boring. And the uncertainty about whether this is a separate seedling or not makes me want to hold off on Charo as well, on the grounds that Charo surely deserves a real, confirmed, distinct seedling of her own.

Which leaves Pure Energy and Royal Grandma, and Pure Energy has the same problem as Charo -- the person it refers to is a big deal, and deserves a distinct seedling. So this one will have to be 062B Royal Grandma, at least until I figure out whether or not it's separate from 062A Open World.


1 Though 056A Demons Begone, 106A Jaws Of Elmo, 127A Cooperating Banjos, 132A Pointy Space Princess, 244A That's My Purse, and 271A Not Here To Make Friends are all way up there on the list too.
2 Annie Lennox is, in fact, so cool that I have more than once caught myself thinking, oh, I should name a seedling for Annie Lennox -- after I already have.
3 I've never had a salt-water aquarium before, salt-water tanks being way more complicated and expensive than I've ever wanted to deal with (also, for obvious reasons, salt-water fish are not available in Iowa all that often, and when they are they're generally not in great health), but as a kid I was periodically obsessed with books about fish. There was one book about salt-water tropical fish that I checked out of the local library so often that it's entirely possible I was the only person who ever got to.
The royal gramma is one of the few species I still remember from the book, along with moorish idol (Zanclus cornutus), sergeant major (Abudefduf saxatilis), and powder blue tang (Acanthurus leucosternon). Plus of course clownfish (particularly Amphiprion ocellaris), who already have a seedling.
Posted by mr_subjunctive at 3:00 AM

The association which "Pure Energy" brings to mind for me is a line from a Star Trek episode wherein Spock describes an entity they have just encountered as "pure energy". That sound bite was later used in the song "What's on Your Mind (Pure Energy)" by Information Society.

That's my association as well, in a roundabout sort of way.