Seedling 098B is yet another orange / pink, not incredibly interesting in context of all the other orange / pinks, but it's pretty. I'm fairly certain that it's not the same seedling as 098A Hunting Tutu; although they're both orange, and although the orange-blooming seedlings can be frustratingly inconsistent from one flower to the next, the yellowish-orange / pink ones like this seedling1 don't fluctuate: if the plant produces one yellow-orange bloom, then they're all going to be yellow-orange.2, 3 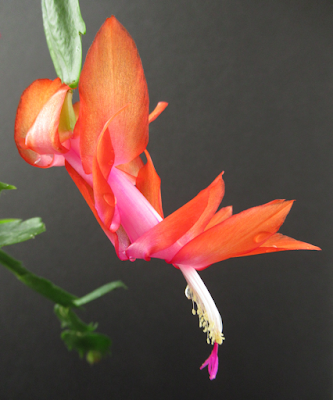 Because it's still orange, though, it poses certain challenges for naming purposes, and apparently when I was coming up with the name finalists I felt especially frustrated about this, because I came up with: Have Mercy, I Get It, Lady Trieu, and Take A Hint.

Three of those are, I think, obvious enough that they don't need to be unpacked. Lady Trieu, though, is an interesting historical figure, and we can afford to spend a little time on her.4

She's basically a (the?) national hero of Vietnam. Officially she's honored for leading the resistance to the Chinese in 248 AD (a resistance which didn't last all that long, but was remarkable for working at all, considering how badly outnumbered the Vietnamese side was), but she's also been mythologized quite a bit, and those stories are pretty remarkable. Basically she was the Vietnamese Joan of Arc, except without the religious stuff,5 and also she was nine feet tall and had three breasts, which were so long that she had to throw them over her shoulder in order to fight, and she was breathtakingly gorgeous and went into battle in brilliant golden robes, mounted on an elephant, and so forth. It's all very dramatic and visual. Somebody should make a movie.6

I didn't wind up with nearly as much time to research as I was expecting to have, though there doesn't seem to be a lot of information available about her as a historical figure, either. So I'll recommend Wikipedia, and two other sites, the last of which is the most entertainingly written and includes links to two additional sites. 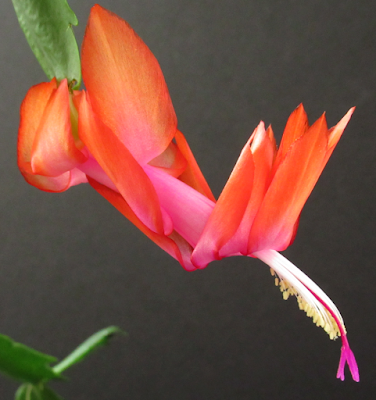 But so back to the seedling. I figure the three "enough already with the orange" names are similar enough that I can eliminate two of them without thinking too hard about it. Because Netflix has finally gotten the fourth season of Z Nation,7 one of the promotional tag lines for which is Have Mercy, I'm inclined to keep that one and drop the other two.

Which means we're stuck with a choice between a name I can't actually pronounce with any confidence, can't spell without copy-pasting from the Wikipedia article, and has associations with a color the seedling doesn't actually produce (Lady Trieu), and a name that's unpleasantly close to an existing name (Have Mercy, which overlaps 176A The Quality Of Mercy). Both are problems, but one's clearly more of a problem than the other, so I guess we're looking at 098B Have Mercy.

Not sure if I can bring Lady Trieu back to try again or not: I'm not likely to get a brilliant yellow bloom from the Schlumbergeras no matter what I do, and even if I wind up confident about the pronunciation at some point down the road, it's still going to be a problem for everybody else if it doesn't sound like "Tree-oo," which is what I'm guessing most native English speakers would come up with. (Maybe "Tree-ow," once in a while.) So. But hey, at least you got to hear about her.


1 (and 012A Sofa Fort, 013A Tantalus, and 113A Helper Dog)
2 Unlike the medium oranges and pinkish-oranges, which seem to turn lighter or darker, redder or less red, pinker or less pink, as the spirit moves them. Combine this with the fact that the same pot can have multiple seedlings -- which may themselves be fluctuating in unknowable schlumbergery ways -- and it's a wonder I have any idea what color any of the seedlings are.
Yes, the adjectival form of "Schlumbergera" is "schlumbergery." Because I say so.
3 There will actually be another case of this later in the year, with pot 019: 019A Belevenissen took over most of the pot and has grown pretty well, but it's apparently left just enough space for a tiny second seedling to grow, and that one has bloomed for the first time this year. Luckily, 019A and 019B flowered simultaneously, so I was able to directly compare the flowers, and they're definitely not the same seedling.
4 Though I am slightly butchering her name because the Vietnamese alphabet is a mess of digraphs and diacritical marks which doesn't lend itself to easy, fast typing. Also I'm not confident that everyone reading this will be able to reproduce the special characters involved. Officially, though, it's Lady Triệu, with a circumflex above the "e" and a dot underneath it.
One consequence of this is that I have no idea how to pronounce her name. The Wikipedia article on the Vietnamese alphabet was surprisingly unhelpful. One of my sources suggests "Jeu Tea Gin" or "Jeu Tea Chin" as an approximate pronunciation, but I have no idea whether this is accurate or not.
5 One assumes she was probably religious to some degree or another, just not in a particularly Joan-of-Arc way. Also, "Joan of Arc" + "Vietnamese" = "Lady Trieu" is obviously a really rough approximation, but it's a comparison made by a lot of the sites that write about her, so I'm going with it anyway.
6 No, seriously: someone should make this movie.
7 Both better than it looks and far superior to The Walking Dead; I bounced hard off of the first episode and had to be convinced to give it a second chance, but I've been glad I did.
To be sure, "superior to The Walking Dead" isn't a high bar to clear -- I stuck with it way longer than was enjoyable for me, but then the episode "Twice As Far" (episode 14 of season six) happened and I threw up my hands in exasperation and have never gone back. Which from what I have heard about season seven was the right call.
Z Nation is at once much more absurd, realistic, and hopeful than The Walking Dead. I mean, yes, you get people who turn blue, and a remarkable scene involving a wheel of cheese. But at the same time, it's not 107 episodes of meeting people and then watching them die horrible deaths at one another's hands.
Posted by mr_subjunctive at 3:00 AM