For whatever reason, the first four seedlings to bloom for the first time this year were "B" seedlings (i.e., they were the second seedling to bloom from the pot they were in). I'm not 100% certain that 018B (previously) and 098B are separate seedlings, but 069B and 095B definitely were. So let's take a look at 069B. 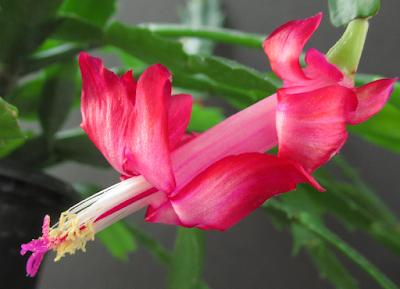 It's only bloomed once this year. The red/pink seedlings (like 054A Helpful Gesture, 078A Art Party, 103B Must Be Love, and 244A That's My Purse) are usually reluctant bloomers. The only exceptions I can think of are 099B Karma Cobra, and maybe 208A Raspberry Possum, though Raspberry Possum is still a very moody bloomer -- some years I get nothing, some years I get a reasonable number of flowers. So there's a good chance that this one bloom is all 069B will give me this year.

The four name finalists are:

I Think She Likes Me, which is a song title (from Treat Her Right) but also works fine if you don't know the song. Song lyrics or titles are always risky for me, because I can get the song stuck in my head every time I read the name, but I don't think I'd be too upset to have this one stuck in my head.

Old Dog New Tricks, which is just a reference to being one of the "B" seedlings.

Pink Disco Trilobite, previously considered for 074A Vroom, 208A Raspberry Possum, and 089B Haunted Houseboat. Doesn't really make sense, except insofar as trilobites are/were neat and there's pink in the flower. I don't know why I keep coming back to this one, but apparently some part of my brain likes it. (And as far as it goes, it would probably have been better for seedling 208A than "Raspberry Possum." Sometimes I pick the wrong name.)

What About The Love was also previously considered (for 178A Lulu's Night Off); it's a song reference as well. 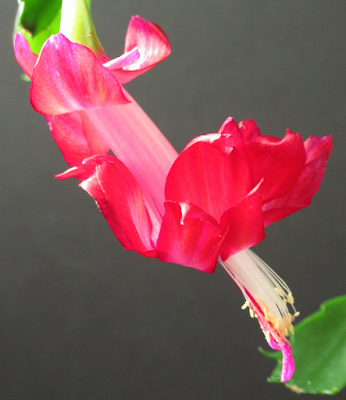 I'm not thrilled with any of these names, but the rules of the game say I have to pick one, so let's start eliminating.

I'm going to drop Old Dog New Tricks, because "dog" references have previously been used for seedlings that seemed inferior.1 069B isn't fantastic or anything, but it's probably not a dog. Hell, most of the "dogs" haven't even been dogs.2

Which leaves us with I Think She Likes Me and What About The Love, and . . . well, as important as I think the message of What About The Love is, I also suspect that the name will depress me every time I read it, because it's sad that it's necessary to remind people of that. If that makes sense. Which it probably doesn't. So by process of elimination, we have 069B I Think She Likes Me. Not super satisfying, but there wasn't an option I was going to be 100% happy with, so I guess I can live with it.


1 060A Wet Dog, 084A Downward-Facing Dog, 113A Helper Dog.
2 As it turns out, Downward-Facing Dog is normal, neither especially bad nor especially good, and Helper Dog turned out to be pretty neat. Don't know how Wet Dog turned out; a reader asked for it, so I sent it to them, and that's the last I heard about it.
Posted by mr_subjunctive at 3:00 AM