The real Maya Douglas would probably not be impressed with her namesake seedling. All I knew about her when I started this post was that she is a pageant queen, and they tend not to be the ones I like the best;1 the stereotype is that they're so focused on achieving a perfect, polished appearance that they are often short on personality or other skills, so I didn't have high expectations when I started poking around on-line. But Maya Douglas is awesome, y'all. Like, I had no idea. Here she is in 2008, lip-synching to "Mercy," by Duffy:2

Adorable. And she's also been doing this forever -- YouTube has videos of her performing that go back to at least 1996, and she was an established presence on the scene before that. Her titles (Ref.): Miss Gay Rochester (New York) 1981,3 Miss Continental 1985, Miss Gay USofA 1995, Texas Entertainer of the Year, F.I. 1997, Universal Show Queen 1999, Miss Krash International 2001, Miss Continental Elite 2006 -- I don't know what most of those things actually are or what sort of prestige they carry, but it's probably safe to say she's a big deal. And she's still making appearances (about about the 6:00 point in this video of 2015 Miss Continental, for example).4

So, like: huge fan, all of a sudden, of Maya Douglas. Which is why it's a little awkward that her seedling is so weird and unpolished-looking: 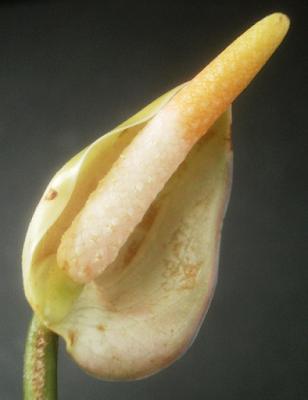 Now, this is more complex and interesting than it looks, and I'm actually really pleased with it, but if you're unfamiliar with Anthuriums, you wouldn't look at this and think wow, I gotta get me one of those. So, why is it cool anyway?

Well. First of all, it's the first green seedling I've gotten. We've seen orange and green together (0330 Faye Quinette, 1727 Mercedes Sulay); red and green together (0842 Pretty Punasti, 1594 Roxy-Cotten Candy), peach and green together (1299 Sinthia D Meanor), various seedlings with green "ears" on a differently-colored center (1213 Miss Foozie, 1268 Li'l Miss Hot Mess, 1224 Perry Watkins), and a lot of seedlings that start out pink or orange and become greener as the spathe ages, but as far as I can tell from the one bloom to date, Maya's aiming for a solid light green. Any seedling can be pretty; unique is much better. 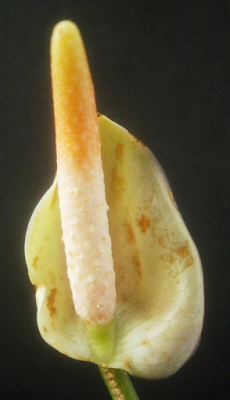 Also, the spathe margins have a little bit of red to them, which is more apparent in some photos than others. 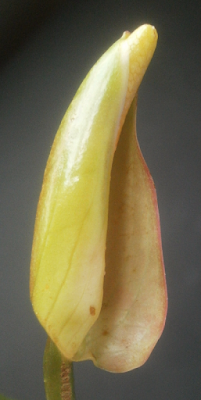 What does this mean? I have no idea. It's pretty normal for pink or red seedlings to have a darker margin, and there have been other light-colored seedlings with a faint, difficult to photograph, pink or red margin (most notably 1293 Power Infiniti), so maybe that's all that's happening here: some gene or group of genes sometimes makes a faint pink or red halo around the margins of the spathe, and Maya happens to have those genes. Though it could also be a sign that the actual color is going to be the muddy brown color you get from mixing green and red. Time will tell.

Maya bloomed while in a 3-inch pot, and was promoted to a 4-inch pot in mid-August. Haven't seen a second bud yet, which is disappointing, though obviously green buds don't jump out at you the same way a red or orange one will, so it's possible that there's one there and I just haven't noticed yet. 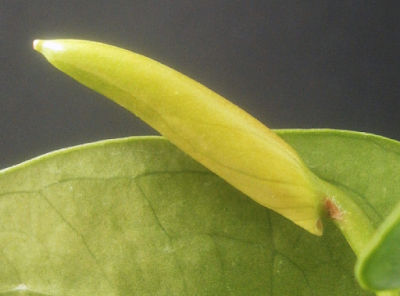 I'm looking forward to the second bloom so much; odds are that it will be more or less the same, but sometimes second blooms are different, and it would certainly be nice to know whether the thrips are going to tear up every bloom this seedling produces so badly. The color is also in question: from the bud, I'd been assuming a strong, yellowish, apple-green like 'Midori,' and instead I got a lighter, more delicate minty green. 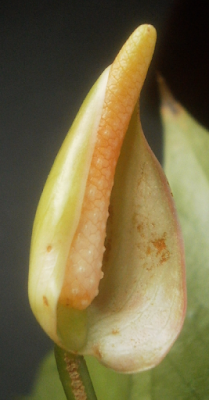 And like I said, green-brown isn't out of the question. Green-brown would make more sense, actually, considering that the seed parent was 0245 Sawyer Ad. 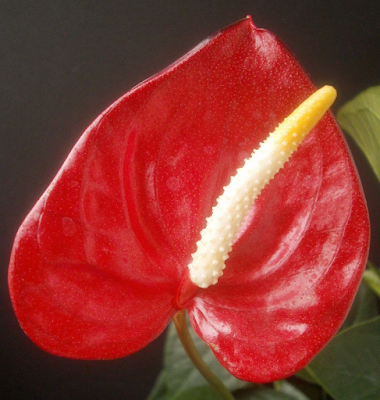 (0245 Sawyer Ad.)
Unexpected colors appear all the time in seedlings, sure, but I would never have thought that a seedling with so much red could give me offspring with so little red.5 The world would make more sense if Maya's future spathes had a mix of red and green pigments. But I guess we'll see. Personally my fingers are crossed for a green green. I'll accept any shade between mint chocolate chip ice cream and pea soup.

As chewed-up as the inflorescences are, the leaves are weirdly undamaged: 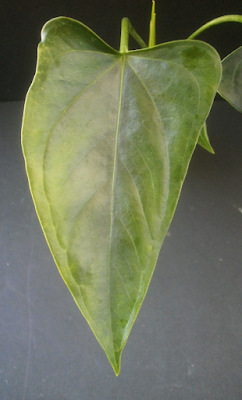 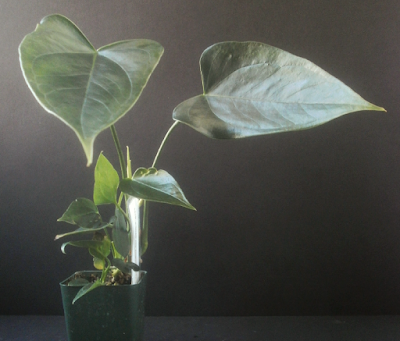 I don't know what to make of that, but the hope is, again, that the first bloom was just atypical, and later ones won't sustain quite as much damage.

Upshot: the story of 1419 Maya Douglas is not yet finished, but the seedling will likely get to stay regardless of what the next bloom looks like, as long as it refrains from getting a severe infestation of scale or ghost mites or something. If the second bloom is pretty, so much the better, but special will be more than adequate.

Very occasionally, I'm lucky enough to get a seedling that's both pretty and special, like 1103 Valeria T., which will be the next post.


1 There is probably a post or two to be done someday where I explain why I like or care about drag at all, considering that it's something I've never actually done or wanted to do, and I don't go out of my way to find shows to watch. (It's entirely possible that I haven't seen a drag show in person since the late 1990s. I mean, it seems like that couldn't possibly be right, and yet I can't think of anything more recent. The husband and I were planning to see Jujubee in Iowa City several years ago, but we didn't wind up going for reasons I no longer remember. Sorry, Juju.)
2 When I went looking for the song (uncredited on YouTube, so I had to search by lyrics), I discovered that I had completely missed Duffy in 2008 when she was at her hottest. "Mercy" was a top-40 hit in the U.S., and yet I'm pretty sure I'd never heard it before this week.
3 Yes, another Rochesterite. What is it about Rochester?
4 I also enjoyed this video from 2010, where Douglas lip synchs to "Happiness," by Alexis Jordan, though a good chunk of that is because it turns out I like the song. The lip-synching is weird in places; it seems pretty clear that the original audio was replaced for the video (which makes videos much, much more pleasant to watch: other queens please take note, I beg you), and maybe the performed version of the song isn't the one the video uses or something, I don't know. (Also sometimes she's pretty clearly talking to an audience member instead of trying to lip-synch.) In any case, sometimes the lip synch is very tight, and sometimes it's not. But if you can get past that, it's an interesting video too.


And then there's a medley, including "The Way We Were" and Gladys Knight's "Best Thing That Ever Happened To Me," which is a little long for my taste but is still well-performed. The word that kept coming to mind is "classy." (It's not quite the word I want, but it's the only one I could come up with.)


And I know sometimes people look at drag and think well what's so impressive about that, it's just somebody wearing a costume and pretending to sing something, what kind of talent do you need to pretend to sing, but something that impresses me about Douglas in these three videos is the way she nails all the details: the outfits go with the songs, the songs go with the wigs, the wigs go with the makeup -- it's all a unified character. She's even adjusting her body language, mannerisms, and facial expressions for each song: it wouldn't have been that difficult to convince me that these were videos of three different (but similar-looking) queens.
And just to be clear, my emphasis on how long Maya's been performing is not in any way intended as shade about how old she must be; I think it's wonderful that she's been so good at this for so long.
5 And, indeed, the only sibling of Maya's to bloom so far is 1493 Kalypso Bang. Kalypso doesn't look like Sawyer either, but at least she makes sense.
Posted by mr_subjunctive at 3:00 AM