Neither of these are very exciting seedlings, so I'm not going to stay on-topic. Not even going to begin on-topic. Brace yourself.1

I'm not comfortable with Kandy Ho's name. Some of it, no doubt, is that I just don't like to be reminded that there are sex workers out there, period, because it makes me sad that I live in a society where that's a thing some people, particularly transgendered women, wind up having to do because they are prevented from doing anything else.2

I don't know if that's Kandy Ho's intention,3 and whether or not it is, it would hardly be unique, a drag performer making light of an awful thing for a joke. (See: Sharon Needles, Detox, Amber Alert, Meth, etc. One of the drag queen names I came up with is actually a pretty dark joke about abortion which is hopefully too obscure for most people to get.4 Roller derby names are this way too: violence, suicide, prostitution, drug abuse, and the occasional Holocaust reference. Making a joke out of horrible things is one way people manage living in a world that contains horrible things.5)

The problem is more that over the last year or so, I've gotten a lot more brittle around these sorts of jokes, because all the hypothetical, abstract, distant, or historical bad things I've heard people talk about all my life are suddenly a lot more real and immediate. I feel it all differently. So, once, I would have been like, oh, a 'ho' joke, cute, and now my knee-jerk response is but . . . isn't prostitution actually kinda, you know, sad, and tragic, and something people wind up doing because they don't have better options?

Which doesn't affect my enjoyment of what Kandy does very much. I was pleasantly surprised to discover that RuPaul's Drag Race did a terrible job of showcasing her as a performer: she's actually pretty awesome. The audio on this is terrible because the audience won't stop fucking screaming, but check it out anyway:

I mean, the lip synching is for shit, but the costuming! The choreography! That flip at 2:18! That's impressive dancing. You wouldn't know she was capable of that from watching Drag Race. So I don't have a problem with her. I think Kandy's great; it's just . . . the name.6

As for our seedlings, well, Kandy doesn't have the most interesting color. 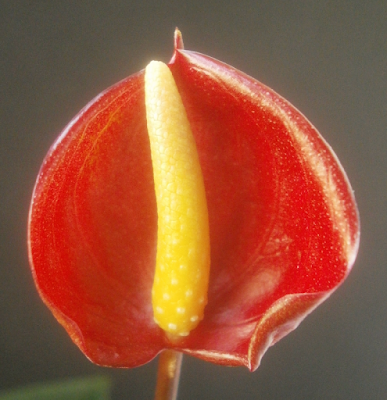 The foliage is interesting, though: both very shiny and very elongated, with one of the leaves also being oddly saddle-shaped. Might be interesting if subsequent leaves look the same. 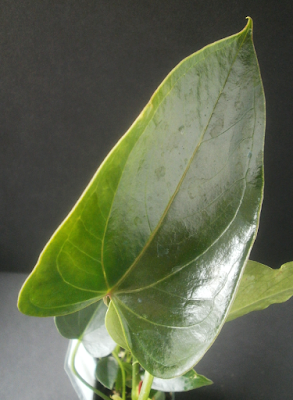 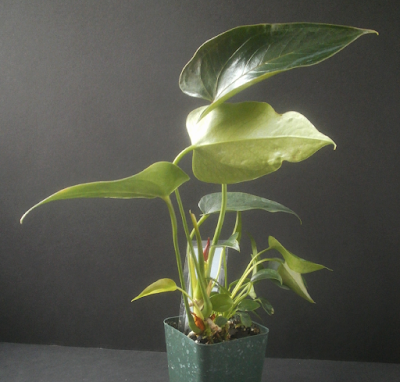 1707 Kandy Ho is another one of the seedlings from 0234 Ross Koz that don't resemble Ross at all.

1493 Kalypso Bang has only produced one bloom so far, which may or may not wind up being representative. 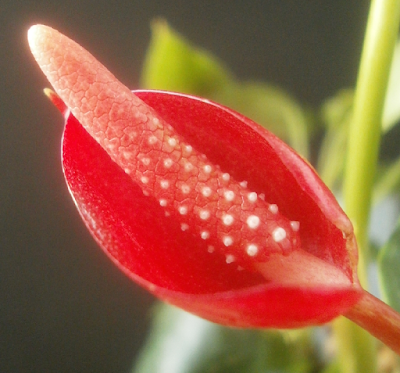 The bloom was small, and didn't age very well. 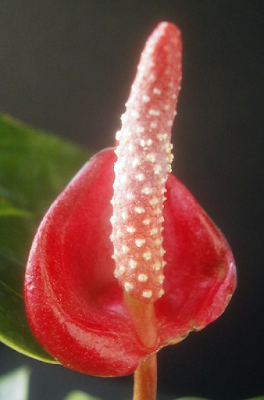 Thrips damage also turns out to be a problem, both on the spathe and the foliage, 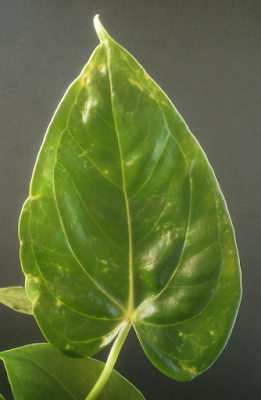 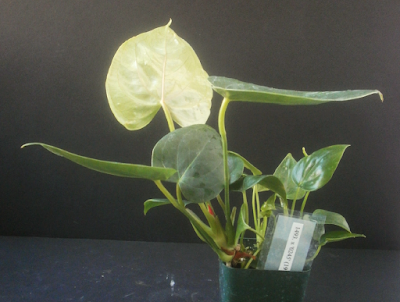 so it's probably not worth keeping around, but I will probably still give it a chance to try a second bloom before I make the final decision.

Kalypso's the second of four seedlings from 0245 Sawyer Ad to bloom so far (the first being 0946 Mysti Oldhaze). The third one looks nothing like any of the other seedlings, and I'm pretty excited about it; you'll get to meet it in about a week.

About all I could come up with on Kalypso Bang the queen is that she's in the UK, and her makeup skills are fantastic.7 I think based in London, but I can't find the page that would confirm that, so don't take it as gospel.


1 This presumes that staying on-topic is desirable, which I'm not actually sure is the case. Personally, I wind up enjoying the posts more when I suddenly find myself talking about Watkins v. United States Army, the "Flower Power" photo or whether faux queens are culturally appropriating gay culture, but I can only do that sort of thing when I have enough time to do all the searches and follow all the links and think about what I found long enough to come up with something to say. Which doesn't actually happen all that often. And sometimes even when I have the time, I don't serendipitously encounter something interesting enough to write about.
2 And I don't think every sex worker is in that position. I've read stuff here and there by people who are like, no, actually, I really love being an escort, the money's great and I have flexible hours and I feel safe, I know my situation's not typical but I do actually wake up every morning and choose to do this because I kinda love doing it.
I have no reason to think those people are lying about their experience, so great for them. *shrug* But that small percentage of happy sex workers doesn't make it okay to make light of all the rest of them, is I guess my point.
3 Maybe Kandy picked that name 'cause she's a big Santa Claus fan. Maybe she had a Korean friend. Maybe she's big into model trains, or first lip synched to "Tiny Bubbles" and inspiration struck.
4 (Hasn't appeared on the blog yet, according to the site search. The seedling died, so you may never actually see the name: I haven't decided whether to reassign it. I was really proud of it at the time, because it's actually kinda clever, but for reasons coming in the next paragraph I'm thinking maybe the world doesn't need to be exposed to every kinda-clever thought I ever have.)
5 We could debate whether joking actually makes the world any less horrible, but I think most of us have at least felt the impulse to make an inappropriate joke rather than feel terrified or despairing or whatever.
6 And I'm being careful not to condemn the performer here because I don't know the intent (having good intentions isn't a pass for bad behavior, but we've all, surely, done well-intentioned things that ended up upsetting people, and it's a shitty feeling to realize that's happened) or context (it's hard for me to imagine a context in which this isn't a reference to prostitution somehow, but, you know, I'm a married middle-aged Iowan Anthurium breeder who hasn't been inside any bar for any reason in like a decade; how much do I know about what it's like to be a famous-ish 30-year-old Puerto Rican drag queen who earns a living performing in clubs, or how she talks to the people around her?).
I also don't know what sort of consequences performing under a different name would have -- her ability to draw crowds to a bar is based partly on people recognizing her from Drag Race, after all. Even if she did decide to change the name, club owners would still advertise her shows as "Kandy Ho." At best, "Euphemia Montenegro (formerly 'Kandy Ho')" or something like that. And I'm not going to tell someone that they're a terrible person if they don't do something that might trash their career. I don't even think it makes her a terrible person even if she already knows all this (which she probably does, since, you know, she's spent way more time than I have thinking about it and living with it) and is totally fine with making prostitution a joke.
The point being that I'm trying to go out of my way to not judge or condemn. I am bothered by it, some. The degree to which that should bother Kandy herself is basically zero.
7 Maybe not to everyone's taste, granted. But stunning.
Posted by mr_subjunctive at 3:00 AM